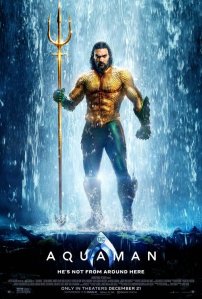 Having largely stuck with the big guns up to this point – Superman, Batman, Wonder Woman, even Suicide Squad made a point of including DC’s most iconic villain, the Joker – Warner Brothers’ DC Extended Universe ventures out into the relative unknown for the first time with James Wan’s Aquaman. To those outside the comicbook community, Aquaman has always seemed a bit weird. His superhero skillset – breathing underwater, swimming really fast, talking to sea creatures – would seem to have a narrow applicability. But having been introduced in Justice League, Arthur Curry is given the chance to front his own blockbuster, and try and show the world what Aquaman is all about.

With an Atlantean queen (Nicole Kidman) for a mother and a human father (Temuera Morrison), Arthur Curry (Jason Momoa), the Aquaman, has lived his entire life on the surface world, never having ventured to Atlantis after their rejection of his mother as punishment for having him. But in Atlantis’ hour of need, Mera (Amber Heard) seeks out Arthur for help. His half-brother, the power-hungry King Orm (Patrick Wilson) is attempting to unite the seven underwater nations to wage war against the surface world. As the rightful king of Atlantis, Arthur is the only one who can challenge Orm, and as living proof that Atlanteans and humans can coexist he could be the only one who can ensure peace. But to usurp Orm, he must win the hearts and minds of the Atlantean people by finding and claiming the legendary Trident of Atlan.

Aquaman’s greatest asset is front and centre on its poster: Jason Momoa. Where the self-serious DCEU has tended to lack engaging protagonists, Momoa oozes an easy, nonchalant charisma. It is a pleasant surprise given that, to this point in his career, the muscular beefcake roles that he has been given (Khal Drogo in Game of Thrones, Conan the Barbarian) have not really provided the opportunity to show this. But his Arthur has a laid back, cruisy demeanour unusual for big screen superheroes. Despite his unique heritage, he is not a tortured soul. Wan and his team have intelligently reimagined the character in Momoa’s image, transforming Arthur Curry from a typically Aryan comicbook hero into a man of islander heritage, incorporating tattooing, and even brief moments of traditional language and dance into the character. One of the primary issues with Aquaman is arguably that Momoa isn’t in it enough. The best moments are those in which his character is given space to breathe, but narrative requirement to show what is going on elsewhere in this busy storyworld means those moments are relatively infrequent. With a strong box office performance all but ensuring that we will see and Aquaman 2, we can hopefully look forward to a film which gives more time and space to Momoa as a screen presence.

With a runtime approaching two-and-a-half hours, Aquaman strains under the burden of world creation. An extraordinary amount of screen time is devoted to exposition – explaining who the Atlanteans are, how they got there, why some Atlanteans have certain powers and others don’t, who the other sea people are, how they evolved, the politics of these societies – not to mention the flashbacks to Arthur’s backstory. Then when Arthur sets off on his sequential quest, every step of the journey requires Mera to deliver a new round of exposition, a new lot of explaining to bring Arthur up to speed with what is required of him (again we have the trope of a highly capable and knowledgable female character required to train up a less capable and knowledgable male character because he is the chosen one). This information overload gets exhausting.

You get the impression the filmmakers have tried to incorporate everything they’ve ever wanted to do in an Aquaman film into this one. The result is a whole lot of movie and a tonal mess. For your ticket price you get a bit of Avatar, a bit of Lord of the Rings, a bit of Raiders of the Lost Ark, a bit of The Phantom Menace (so much unnecessary political debate). There’s even a section where Arthur and Mera visit Sicily which has a Mamma Mia vibe to it. One moment it is campy, goofy comedy, the next Wan is flexing his horror directing muscles (having cut his teeth in the Saw and Conjuring franchises). While that should mean that there is a little bit of something here for everyone, it also likely means that there is something in there that will annoy everyone. There are giant swathes of the film that struggle to retain interest. Patrick Wilson’s King Orm is a bland character, and a subplot in which pirate David Kane becomes Black Manta feels entirely tangential to the central storyline. There are also significant narrative events which are not followed through (Orm causes a worldwide tsunami in the first act, which surely would have killed tens of millions of people, but it is not referenced for the remainder of the film). With the film already so overstuffed, it is a relief that, with the exception of one throwaway reference to Steppenwolf from Justice League, there are no attempts to interweave the film with the wider DCEU. All of this business distracts from the time we get to spend with Arthur and Mera on their quest, which constitutes both the film’s most interesting plot line and engaging relationship.

Aquaman is a bonkers, effects-heavy, colour and light show – and features the most unlikely of Julie Andrews cameos. The DCEU has a history of taking itself very seriously, but when your film involves underwater armies of men riding giant seahorses fighting against giant crustaceans, you simply cannot afford to. For all its issues, Aquaman believes in its premise while being comfortable acknowledging its inherent silliness.

Have you seen Aquaman? Leave a comment and let us know what you thought.