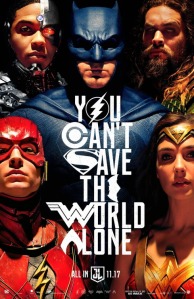 While it had all sorts of problems and received a pasting from critics around the world, one thing you have to hand to Batman vs Superman: Dawn of Justice is that it swung for the fences. It had an idea and committed to it. It just didn’t end up being an idea which connected with audiences. Justice League, the latest film from Warner Brothers’ much maligned DC Extended Universe, is a significantly less ambitious movie. A gun shy film which shows more evidence of being chastened by the reaction to Batman vs Superman than emboldened by the success of Wonder Woman, it plays it safe and, as a result, ends up being entirely bland and largely forgettable.

Chronologically, Justice League is a sequel to Batman vs Superman rather than Wonder Woman. We find the world still mourning the death of Superman (Henry Cavill), and his passing has left it vulnerable.  Winged Parademons who feed on fear have started showing up at Gotham and Bruce Wayne (Ben Affleck) is convinced that they herald something much worse on its way. Receiving warning from Themyscira, Diana Prince (Gal Gadot) confirms his suspicions. Thousands of years after being turned away, the evil god Steppenwolf (Ciaran Hinds) has returned to Earth to try and reclaim three powerful energy sources called ‘mother boxes’ hidden on the planet which he will use to wreak havoc. So Bruce and Diana must work quickly to round up the metahumans they have identified to form an alliance and save the world. There is Arthur Curry (Jason Mamoa), a man from the ocean with the power to control water; Barry Allen (Ezra Miller) who can move very fast; and Victor Stone (Ray Fisher) who is half man half machine. Wonder Woman, Batman, Aquaman, the Flash and Cyborg. But without Superman, will they be enough?

All-star team-up movies are supposed to feel epic. Seeing all these heroes together is supposed to be a blockbuster event. Justice League, however, fails to capture both that sense of fun and scale. While the circumstances that brought director Joss Whedon to the project were very sad – Zack Snyder was forced to pull out midway through production due to a family tragedy, but still receives sole director credit – there was hope that the man behind The Avengers could bring a similar sense of fun to this film. The reports that Whedon reshot 15-20% of the film, along with the fact that he rewrote enough of the script to earn a co-writing credit (writing credits are very carefully attributed in Hollywood) added to this expectation that there was a change in direction afoot. But while Justice League is not cut from the same sombre cloth as Batman vs Superman, nor does it embrace the sense of hope and sincerity that made Patty Jenkins’ Wonder Woman such a breath of fresh air. While some of the dialogue is clearly Whedon-ish, and the look of the film retains the heavily digital aesthetic that Snyder had established, ultimately Justice League doesn’t feel like a film belonging to either director. Instead it feels like a movie with two directors, and therefore lacking in a singular vision. It feels like a movie which has had some work done to it, with noticeable gaps in the narrative having been unconvincingly papered over.

Justice League is burdened with the need to introduce new characters. In contrast to The Avengers, an unavoidable comparison point, which did not contain a single major character whom we had not already met, the primary villain and three of the five members of the Justice League have not appeared in any substantive role in the DCEU before. As a result, the new characters are thinly sketched. Mamoa’s Arthur Curry is a dude bro and Fisher’s Victor Stone is a mopey and broody genius, while Miller’s Barry Allen seems to have been given the job of singlehandedly providing the film’s comic relief, a responsibility which sees him sometimes trying a bit too hard. With each of these new heroes bringing a couple of supporting characters in preparation for their upcoming standalone movies, it makes the first 45 minutes of Justice League a sea of introductions and heavy exposition.

Those already established characters – Batman, Wonder Woman and Superman (Surprise! Superman is in the film. Warner Brothers didn’t actually kill off their most iconic hero after only two appearances) – display some inconsistencies in characterisation which dampen the audience investment they would be hoping for by this point in the franchise. Wonder Woman is still a highlight but there is an intangible difference to the character. You can tell that you are watching a male directed version of the character, unlike earlier in the year. Having lived in the modern world for a century now also means that the fish-out-of-water comedy that worked in Wonder Woman is no longer on the table. The character of Batman has changed most notably, clearly in reaction to negative feedback despite Affleck’s performance being one of the better elements of Batman vs Superman. With a newfound faith in humanity and determination to make up for past sins, this characterisation of Batman feels restrained and Affleck appears to be less invested in this version. The pleasant change, however, is in Henry Cavill’s Superman, who has been massaged into the best version of the Man of Steel that the DCEU has yet shown us. For the first time it appears that the character actually wants to be Superman.

Stranger, though, than issues with characterisation is that the film just doesn’t feel big. Without the successful ratcheting up from previous films, the bringing together of the Justice League does not feel like the culmination of anything. This lack of stakes is the result of a very underwhelming antagonist and Macguffin. For the umpteenth time in recent years we have a film about a mysterious and volatile alien power source which threatens to destroy the world by falling into the wrong hands. In this case they are three mother boxes, which when brought together spell trouble. Attempting to bring them together and cause said trouble is one of the more generic superhero villain’s in recent years, Steppenwolf. That the antagonist is so uninteresting is a particular problem in a movie such as this which requires a powerful villain to necessitate the bringing together of more than one superhero.

Fans of the genre will get a tickle from Danny Elfman’s score. While largely ignoring the groundwork laid by Hans Zimmer thus far in the DCEU, it contains noticeable allusions to both his own ‘Batman March’ from the 1989 Batman, and to John William’s iconic ‘Superman theme.’

In an era of blockbuster cinema that will be defined by superhero movies, the DCEU continues to suffer by comparison, whether to the success that the rival Marvel Cinematic Universe is having or to Christopher Nolan’s highly successful Dark Knight Trilogy which preceded it. As has been the case with most of the DCEU films thus far, Justice League feels like it is hurrying to catch up, and in doing so trying to cash cheques it hasn’t earned yet. Rather than executing a clear vision, this is another reactionary film. While probably better than Batman vs Superman, even if its central ideas are significantly less ambitious, and definitely a mile better than Suicide Squad, it is a case of one step forward, two steps back after the success of Wonder Woman earlier in the year.

Have you seen Justice League? Leave a comment and let us know what you thought.