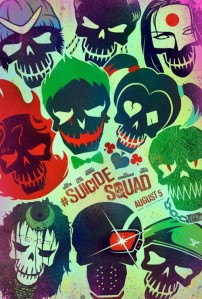 Suicide Squad represents the brave next step in the stuttering DC Expanded Universe as, for the first time, it shifts its focus away from DC’s big two characters, Superman and Batman, instead looking to a band of misfit villains-turned-heroes. Redemption is the theme here. Redemption for these characters and redemption for the studio after the less than glowing reception of Batman vs Superman: Dawn of Justice.

The US government is still coming to terms with the presence of meta-humans in the world after the climactic events of Batman vs Superman. What happens if the next Superman isn’t such a nice guy? Intelligence agent Amanda Waller (Viola Davis) proposes an initiative called Taskforce X. In exchange for reductions in their sentences, a group of highly dangerous but highly gifted criminals in Belle Reve Penitentiary are engaged to fight America’s most dangerous foes. The band of misfits includes assassin Deadshot (Will Smith), the Joker’s equally disturbed girlfriend Harley Quinn (Margot Robbie), El Diablo (Jay Hernandez) who can control fire, Captain Boomerang (Jai Courtney) who can throw boomerangs, half-man half-crocodile Killer Croc (Adele Akinuoye-Agbaje), Katana (Karen Fukuhara) a ninja with a sword that captures souls and Slipknot (Adam Beach) who “can climb anything.” They are put under the command of Rick Flag (Joel Kinnaman), who we are informed is the finest special forces officer the country has ever produced. To keep each of these deranged individuals in check, they are implanted with a literal kill switch. If at any point they step out of line or make a run for it, they will be terminated.

The concept has a Dirty Dozen ring to it. Like the higher ups in that film, in the eyes of Amanda Waller the greatest attribute of this group is that they are entirely expendable. They can be sent into the most impossible situations with no regard for whether they can get out alive. What is missing, though, is the character who truly believes in them. Rick Flag, unlike Lee Marvin’s Major Reitman, displays outright animosity to the group, and while he will learn to work with them, and develop a begrudging respect for Deadshot, you never get the impression he wouldn’t rather simply have a team of well trained military men like himself.

After about an hour of character introductions and exposition, the team is assembled and the film realises that it actually needs to give them something to do. And this is where the rot sets in. Suicide Squad suffers from a very thin plot and a villain who lacks clear motivation. We have an ancient evil spirit called the Enchantress who inhabits the body of archaeologist June Moone (Cara Delevingne). Originally seen by Waller as a potential candidate for Taskforce X, she breaks free, releases her evil spirit brother and sets in motion a never-properly-defined plan that involves turning civilians into monsters and opening up a portal in the sky (in a scene we have already seen versions of in Ghostbusters, The Avengers and who knows how many other films).

Suicide Squad was trumpeted as a change in direction for the DCEU, offering a lighter, more irreverent entertainment than its dark and gloomy predecessors, however it only achieves this in patches. Ayer’s film is tonally uneven, swinging back and forth between moments of levity and others that are aggressively dark (there are troubling scenes which allude to the role of sexual violence in Harley’s transformation at the hands of the Joker). The introductions of the characters are fun, using on screen titles to give different biographical trivia about each. But this irreverent tone doesn’t persist for the duration of the film the way it did in Deadpool, instead reverting to a generic superhero film for the second and third acts. Like Guardians of the Galaxy, the film uses a pop-heavy score, but it doesn’t take long for a new song for the introduction of each character to get a bit distracting, and then start to grate. While the songs themselves are great, they are used in such a cliched way that they become groan-worthy (‘Sympathy for the Devil’ and ‘House of the Rising Sun’ have been done to death).

While largely well cast,  this ensemble story is really all about Will Smith and Margot Robbie. Deadshot and Harley are easily the two most fleshed out characters, and it is the natural charisma of the two performers that carries much of the movie. El Diablo is also given a basic character arc but the rest of the group are either simple comic relief (Boomerang) or just thinly sketched (Killer Croc). And herein lies what is arguably the fundamental flaw of Suicide Squad. It is a team-up movie, drawing together established villains from DC comic books but the effectiveness of the concept is diminished by the fact that they are not yet established in the DC films. A much more interesting movie could have been made had they held off and made Suicide Squad the sixth or seventh film in the DCEU, drawing together a team of villains already established in the preceding films. It would have saved the need to spend the first hour of the film introducing characters and challenged the audience to realign their existing perceptions of the characters.

Much of the pre-release focus on Suicide Squad centred on Jared Leto taking on the role of the Joker, but this proves to be somewhat of a misdirect. As with Batman, played here again by Ben Affleck, the Joker is a side character in this story. His interest is only in Harley. He has little to do with the other members of the squad and exerts very little influence on the direction of the narrative. In terms of his performance, Leto manages to do something different with the character, which he had to, but his Joker is much less engaging and seems to be having less fun than Heath Ledger and Jack Nicholson’s.

DC bashing seems to have become a favourite critical pastime of late and both readers and writers are tiring of it, but this constant criticism comes from a place of disappointment rather than glee. No one wants these movies to be bad. We all want them to be great. But they haven’t been. Suicide Squad is in some senses clearly a step in the right direction for the DCEU. It lacks the self-seriousness that plagued both Man of Steel and Batman vs Superman. However, it still falls well short of hopes and expectations. While the concept itself is sound, a concept alone cannot carry a film. It needs to be translated into a compelling narrative and that has unfortunately not happened here.

Have you seen Suicide Squad? Leave a comment and let us know what you thought.