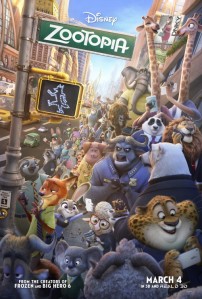 In 2013 Frozen earned Disney praise for, among other things, its deviation from the well worn princess formula by showing the love of a sister to be every bit as powerful as that of a prince. With the charming Zootopia, the studio continues the positive evolution of its messaging for young girls by presenting a female protagonist who is not a princess but a police officer.

Since childhood, idealistic bunny Judy Hopps (Ginnifer Goodwin) has dreamed of leaving behind the rural life of a carrot farmer to become a police officer in the big city. The more people told her it was an impossible dream, that there had never been a bunny police officer before, the stronger her drive got. The first to benefit from the mayor’s Mammal Inclusion Initiative, Judy graduates top of her class from the academy, determined to prove that she belongs and is “not some token bunny.” But when her dream comes true and she is assigned to the Zootopia Police Department, she finds herself out of place among the rhinos, elephants and other massive creatures that make up her colleagues. Chief Bogo (Idris Elba) doesn’t know what to do with her and, despite her enthusiasm to get into real crime fighting, assigns her to parking duty. However, when she elbows her way onto a small case that no one else is willing to take she discovers a much larger and more concerning pattern: something is causing predators to “go savage,” reverting to long dormant violent impulses. With no friends on the inside, she has to look outside for help and recruits a local scam artist fox, Nick Wilde (Jason Bateman), to assist her in her investigation.

Zootopia uses its bright and colourful facade to deliver an effective fable about discrimination, stereotyping and, in the face of that, empowerment. While Zootopia is presented as an idealistic city in which predators and prey live peacefully alongside each other, under the surface things aren’t so harmonious. Screenwriters Jared Bush and Phil Johnston cleverly appropriate language and scenarios usually associated with discussions of race to illustrate the tensions. Judy bristles when another character calls her cute, informing him that it is ok for a bunny to call another bunny cute but not for another animal to do it. Nick picks up Judy for being patronising when she expresses surprise at how “articulate” he is for a fox. It is incredibly effective without being too preachy. Naturally, these underlying tensions bubble to the surface when the incidents of predator savagery become public knowledge.

Illuminating this thematic exploration is the presentation of a classic odd-couple buddy movie. As well as finding comedy in the pairing of the earnest Judy with the sly Nick, by pairing her with a fox she is, while fighting against discrimination, confronted by her own discriminatory instincts. The fox is the creature her family has brought her up to be most fearful of. Her father insisted that she take a can of anti-fox spray with her when she moved to the city. The acknowledgement that someone can be simultaneously victim and perpetrator of discrimination adds depth to Zootopia’s message.

All of this is cased in a highly satisfying mystery narrative as Judy and Nick try to get to the bottom of what is causing all of these predators to revert to their savage roots. Rather than a simple, slapped-together narrative, Zootopia’s detective story is genuinely engaging. While a bit lighter, it is reflective of Robert Zemeckis’s wonderful Who Framed Roger Rabbit in the way that it balances the cartoonish fun with a dark and troubling mystery.

The theme of tolerance and acceptance, the buddy movie structure and the mystery narrative are all complementary, each enhancing the other. Often when an animated film is described as “working on multiple levels” that is code for there being little nods and jokes for the adults interspersed through a children’s film. But in Zootopia you have a film which genuinely offering its audience multiple satisfying ways to engage with the film.

Zootopia’s narrative is complemented by strong animation and performances. Vibrant and colourful, David Goetz’s production design is fun and clever, imagining how a thriving metropolis that has giraffes living alongside mice would have to look. The voice casting is also excellent, with the focus clearly on getting the right voice for the character rather than just collecting as recognisable a list of names as they could find. Ginnifer Goodwin beautifully captures Judy’s irrepressible optimism while Jason Bateman brings a manipulative slickness to Nick.

A well put together film, Zootopia is fresh and smart. Following on from Frozen and Big Hero 6, it adds further evidence that, while often living in Pixar’s shadow, Walt Disney Animation Studios may be experiencing another purple patch.

Have you seen Zootopia? Leave a comment and let us know what you thought.

While stressing about how I’m going to teach the rest of the semester remotely from home with Kate also having a full teaching load and two young kids who, rightly, have little regard for our work schedules, I figured a new desktop was in order to remind me to take it easy. #thedudeabides
Getting ready to kick off 2020 with a new group of fresh faced first years. Throwing them in the deep end and taking them back to the very dawn of cinema.
My local little cinema. Six films. Four directed by women. Five about female protagonists. Just struck me as noteworthy.
See @littlewomenmovie. It might just be perfect.
Merry Christmas
Skyfall in Concert at @sydneyoperahouse. I’ve never done one of these before. Pretty cool.
A great day of screenings to round out three years with AFTRS class of 2019.
Thank you, @boredolives. #Shining #overlookhotel
My worlds colliding. #theboss #scorsese