In 1960, Alfred Hitchcock shocked audiences and turned narrative cinema on its head when he killed off his protagonist Marion Crane only a third of the way through Psycho. He could hardly have imagined that sixty years down the track he would be one-upped by a kids movie that manages to kill its protagonist before the opening title card. Of course, Pixar has made a habit of challenging our expectations of kids films, but perhaps more than ever before, to call Soul a kids movie at all is some combination of reductive and misleading.

END_OF_DOCUMENT_TOKEN_TO_BE_REPLACED

As it was for many, 2020 was a disaster for cinemas. Doors were closed for much of the year and even when they opened, the major studios’ reluctance to release their big properties into a compromised theatrical market left them light on product. Depsite this, it has actually been a pretty good year for movies. The space created by the near total absence of mega-blockbusters allowed those small and mid-level films which had found a home on streaming services to enjoy more of the spotlight than they might have initially expected.

While the demands of reworking curriculum on the fly for online delivery meant that I didn’t get to write as many reviews this year as I might have liked, I still got to see plenty of films. Here are my top ten for 2020…

END_OF_DOCUMENT_TOKEN_TO_BE_REPLACED 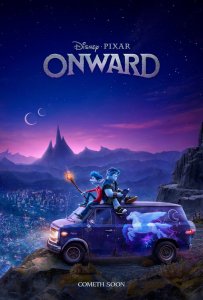 After a recent emphasis on sequels, with Toy Story 4, Incredibles 2, Cars 3 and Finding Dory all coming out in the last four years, Pixar is returning to original storytelling with Onward. Co-written and directed by Dan Scanlon, who previously helmed Monsters University (another Pixar sequel), Onward fittingly offers escapism and adventure at a time when everyone is housebound and in dire need of distraction.

Transferring high fantasy to the present day, Onward transports us to a magical world which has lost its magic. A brief prologue describes how long ago this world had been full of wonder, adventure and, most important of all, magic. But magic was hard to master so as time passed the world turned its back on it in exchange for the convenience of science. Thus, we find the town of New Mushroomton, a sprawling suburbia much like our own, except that it is inhabited by elves, centaurs, cyclopses and pixies, and has somewhat of a feral unicorn problem. END_OF_DOCUMENT_TOKEN_TO_BE_REPLACED

This will hardly come as news to anyone with young children, but Disney’s Frozen was kind of a big deal. In grossing US$1.27 billion at the international box office it became both the highest grossing animated film and the highest grossing movie musical in history. It showed that even in the era of Pixar there is still a market for the traditional Disney animated musical while subverting that very formula, giving us a Disney princess movie with a feminist twist in which the true love that saved the day was not the romantic love between our princess heroine and her handsome rescuer, but the familial bond between sisters. Five years on, it is with much anticipation that they are again deviating from the formula, this time by giving the film a theatrical sequel, something Disney animations have never really had before. Even mega hits like The Lion King, Aladdin and The Little Mermaid only received direct-to-video follow ups. END_OF_DOCUMENT_TOKEN_TO_BE_REPLACED

How iconic does a film need to be before it becomes untouchable? Evidently, the answer is ‘even more iconic than The Lion King.’ The 1994 classic which is regarded by many as the pinnacle of the early 1990s golden era of Disney animated musicals, which was up until Frozen the highest grossing movie musical of all time, and which spawned a Tony Award winning Broadway hit, is the latest of the Mouse House’s back catalogue to get a do-over. END_OF_DOCUMENT_TOKEN_TO_BE_REPLACED

Emily Blunt has spent the last few years of her career continually challenging audience perceptions of her as an actress, impressing in thrillers (Sicario), action films (Edge of Tomorrow), musicals (Into the Woods) and horror movies (A Quiet Place) on the way to becoming one of the most versatile actors going around. Arguably her greatest challenge yet, Mary Poppins Returns sees her step into one of the most iconic roles in the history of cinema, a role indelibly linked in the mind of audiences with its original star. But in doing so with great distinction, Blunt demonstrates that she might just be practically perfect in every way. END_OF_DOCUMENT_TOKEN_TO_BE_REPLACED

In 1991, New York Times theatre critic Frank Rich declared that the best Broadway musical score of the year actually belonged to a movie. Disney’s Beauty and the Beast was a sensation. It became the first animated feature film to be nominated for Best Picture at the Academy Awards, spawned a long-running Broadway show, and arguably represents the high watermark for Disney’s animated musicals. All of which means that the latest in Disney’s run of live-action remakes of their animation back catalogue probably has the highest stakes.

The opening prologue, which is here dramatised rather than simply narrated, transports us back to provincial France where an arrogant prince (Dan Stevens) is transformed into a hideous beast, and all his staff into crockery and furniture, as punishment for his cruelty, and doomed to stay that way unless he can learn to love and earn someone’s love in return. That someone is Belle (Emma Watson), a bookish but courageous girl from a nearby town who becomes prisoner in the beast’s palace before working her way into the hearts of the staff and, ultimately, their master (leading some to cynically refer to the film as ‘Stockholm Syndrome: The Musical’). END_OF_DOCUMENT_TOKEN_TO_BE_REPLACED

With Ron Clements and John Musker, directors of The Little Mermaid and Aladdin, at the helm Disney is back to doing what it does best, the princess movie. But with Moana, they manage to bring a fresh cultural twist to this old standard.

Moana (Auli’i Cravalho) loves her island paradise home of Motonui, but since she was very young she has felt called by the ocean. Her father (Temuera Morrison), the chief of her village, has forbidden people from venturing beyond the shallow waters of the reef, but when Motonui is faced with an ecological catastrophe she is compelled to set sail to save her people. Folklore told of the time the trickster demigod Maui (Dwayne Johnson) stole a precious green stone known as the Heart of Te Fiti from the goddess who gave life to the islands. Encouraged by her grandmother (Rachel House), Moana sets out to find Maui and convince him to return the Heart of Te Fiti and restore order. END_OF_DOCUMENT_TOKEN_TO_BE_REPLACED

In 2013 Frozen earned Disney praise for, among other things, its deviation from the well worn princess formula by showing the love of a sister to be every bit as powerful as that of a prince. With the charming Zootopia, the studio continues the positive evolution of its messaging for young girls by presenting a female protagonist who is not a princess but a police officer.

Since childhood, idealistic bunny Judy Hopps (Ginnifer Goodwin) has dreamed of leaving behind the rural life of a carrot farmer to become a police officer in the big city. The more people told her it was an impossible dream, that there had never been a bunny police officer before, the stronger her drive got. The first to benefit from the mayor’s Mammal Inclusion Initiative, Judy graduates top of her class from the academy, determined to prove that she belongs and is “not some token bunny.” END_OF_DOCUMENT_TOKEN_TO_BE_REPLACED

Animation studio Pixar has produced more than its fair share of beloved movies but 2003’s Finding Nemo undoubtedly sits close to the top of their very impressive pile. So it was inevitable that we would return to the Pacific Ocean for another installment, and with Dory, the lovable blue tang with the five-second memory, being arguably their most popular character it made sense that she would play a starring role. The only surprise then is that it took 13 years for us to get there. But Pixar’s track record is not nearly as impressive when it comes to sequels. With the exception of Toy Story 2 and 3, none of the others have really hit the mark. Pixar is undoubtedly at their best when they are being original and thinking outside the box, but with a title that suggests much the same premise as the first film, can Finding Dory be more than just a simple retread?

“Hi, I’m Dory. I suffer from short term memory loss.” These are the first words we hear in Finding Dory and in an instant they simultaneously re-establish who this character is and entirely reinvent her for this new story. END_OF_DOCUMENT_TOKEN_TO_BE_REPLACED

This is the entire DVD collection at the holiday accommodation I’m staying at. What a baffling trio!
Week 38 - Part 2
Week 38 - Part 1
We all mourn in our own way. It’s what the queen would have wanted. #nationaldayofmourning #dcleagueofsuperpets
Week 37 - Part 2
Week 37 - Part 1
Week 36
Week 35 - Part 2 (inspired by seeing Opera Australia’s wonderful production of Phantom of the Opera at the Sydney Opera House. Thanks again @humphriesmark )
Week 35 - Part 1