Over the last 25 years Pixar have produced numerous original and imaginative films which have helped establish them as the world’s premier animation studio. But there is no doubt that Toy Story is their flagship franchise. The Toy Story trilogy are beloved in a way that only a handful of film franchises can genuinely claim to be. This is why the surprise announcement that we were going to receive a fourth film was greeted with equal parts excitement and hesitancy. With the series having been so perfectly closed out with 2010’s Toy Story 3, what was there left to say? Why were we reopening this story? Were the Marvel Cinematic Universe, Star Wars franchise and the live action remakes of their animated classics not enough to satiate Disney’s thirst for profit? It seemed unnecessary and rife with potential to tarnish something which was, in many people’s eyes, perfect. How many really good have there been with a ‘4’ at the end of the title? But by now we should know that Pixar can be trusted.

Having moved on from Andy to a new kid, Bonnie (Madeleine McGraw), life is different for Woody (Tom Hanks). After years of ruling the roost in Andy’s bedroom, he is no longer the favourite toy, increasingly finding himself left in the wardrobe while others are getting played with. Despite this, Woody remains a fiercely loyal toy, determined to be there in whatever capacity his kid needs him. So with Bonnie being very nervous about her kindergarten orientation, Woody sneaks along in her backpack to look after her. At kindergarten, Bonnie makes herself a new friend, Forky (Tony Hale), from a spork, a pipe cleaner and popsicle stick. While very important to Bonnie, Forky struggles to come to terms with the idea that he is now a toy. When Bonnie’s family goes on a surprise road trip, Forky escapes from the car and it falls to Woody to go and get him back.

Toy Story 4 retreads a lot of familiar ground. We are again exploring the idea of what it means to be a toy as well as dealing with the fear of pending obsolescence. With Woody’s mission to recover Forky, and the rest of the toys subsequent mission to find Woody, we are doubling down on a rescue mission narrative that we’ve already seen a few times in this series. But as is always the case, what makes this sequel interesting is what it offers us that is new, which in this case is Forky. In the previous three films, every toy that we have met has been a mass produced consumer item that has found its own personality and place in Andy’s bedroom. Toy Story 2 had some fun with this by bringing Buzz Lightyear (Tim Allen) face to face with another, less self-aware version of himself. Forky, on the other hand, is the direct product of a child’s creativity. A Frankenstein’s monster type figure, Forky is given sentience by Bonnie. In his mind he is still garbage and in Woody and the gang teaching him what it is to be a toy the film is examining the sort of profound questions about the nature and purpose of life that Pixar does so well. 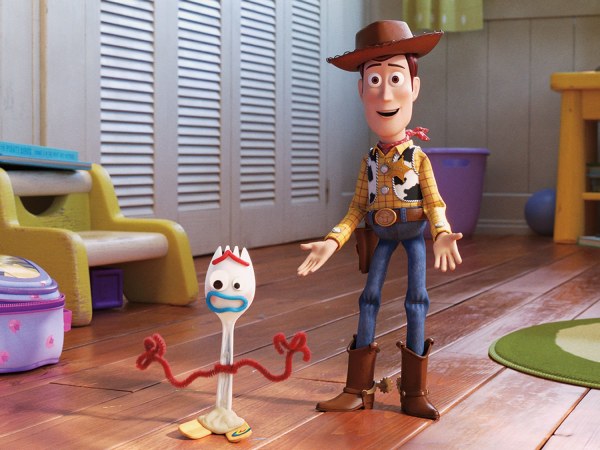 Where previous Toy Story films have been two-handers with Woody and Buzz or broader ensemble pieces, this is very much Woody’s story. That doesn’t mean we don’t get to see our old friends. Buzz, Jessie (Joan Cusack), Rex (Wallace Shawn), Hamm (John Ratzenberger), Slinky (Blake Clark) and Mr and Mrs Potato Head (Don Rickles and Estelle Harris) all get their moments to say hello. When the narrative places Woody and Forky in an antique store we get to meet a raft of new characters, most notably our antagonist, a 1950s doll named Gabby Gabby (Christina Hendricks) who has a particular interest in Woody’s voice box, and her creepy ventriloquist dummy henchmen. Canadian stunt cyclist Duke Kaboom (Keanu Reeves) is also a highlight. The biggest surprise, though, is the return of an old friend. After being absent from Toy Story 3, Woody’s old flame Bo Peep (Annie Potts) re-emerges. This survivalist, action hero version of Bo has spent the last seven years loving life as a lost toy. Her reappearance prompts the film’s more potentially divisive deviation from what we’ve seen before. The Toy Story films have always been underpinned by two key principles. The first is that a toy’s primary concern should be the happiness and wellbeing of their kid. That is the job of a toy. A toy without a kid was a tragic figure. The second is that the toys stick together. Hence the constant rescue missions. Bo’s reappearance sends Woody on an emotional journey that challenges both of these presumptions, and asks him to make choices which, in the context of the series, seem out of character.

Yet despite all of this, one question kept nagging at me throughout the film: who have they made this film for? Pixar’s reputation is built on making brilliant family films. Films which ignite the imagination of children, filling them with joy and wonder, while containing a depth and poignancy which impacts, and on occasions even emotionally destroys, the adults accompanying them to the theatre. Toy Story 4 doesn’t quite hit this balance. It swings between being quite scary (those ventriloquist dummies are creepy as hell) and sad, often forgetting to be joyful and fun. For those adults who saw the original 24 years ago and have grown up with these characters, it is great. But for a child today, coming to this world for the first time? It says something that the daytime screening I attended was populated primarily by adults and teenagers, while the only child in the room anywhere near the age of Bonnie was audibly distressed by passages in the film.

Quibbles aside, Toy Story 4 is undoubtedly a well made film. Pixar seemingly know no other way. As with each of the previous sequels, it demonstrates another step forward in the beauty and precision of Pixar’s animation. Is it a necessary film? Did we need to come back for this story? Probably not. But while it is not quite at the standard of the original trilogy, it doesn’t sully anything. No one’s childhood has been ruined. And if measured by the standard of fourth films in a series, it is pretty impressive.

Have you seen Toy Story 4? Leave a comment and let us know what you thought.