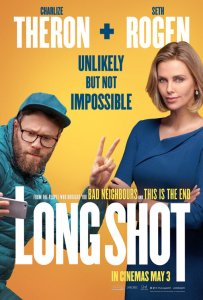 While politics makes people feel a lot of things these days, romantic doesn’t tend to be one of them. Where 25 years ago a film like The American President with Michael Douglas and Annette Benning could use the romanticism of the very idea of the Presidency and the White House to build a love story, in the decades since we are more accustomed to seeing the White House as a setting for action thrillers. And with politics seemingly growing more divided by the day, Jonathan Levine’s romantic comedy and political parody, Long Shot, would seem to be exactly that. But with its strange combination of crass humour and high ideals, it actually kind of works.

Investigative journalist Fred Flarsky (Seth Rogen) resigns in disgust when his alternative newspaper is bought out by media tycoon Parker Wembley’s (Andy Serkis) News Corp-style conglomerate. To lift his spirits, Flarsky’s friend Lance (O’Shea Jackson Jr.) takes him along to a swanky fundraiser – Boyz II Men is performing – where he crosses paths with Secretary of State Charlotte Field (Charlize Theron). But this is not the first time they’ve met. Field, the youngest ever Secretary of State, was once his babysitter. With the incompetent incumbent President (Bob Odenkirk), a former TV star who used to play the president on a long running show, deciding not to seek a second term, Field is secretly preparing for a presidential run. While seemingly the perfect candidate, her team’s analysis suggests people would like her to be funnier. So she hires Flarsky to punch up her speeches. Travelling the world as Field attempts to get one hundred countries to sign up to an environmental initiative she is championing, the two start to bond and before too long, fall for each other.

For a genre that has historically relied on the charisma of its stars, Long Shot provides the biggest name rom-com pairing we have seen in quite some time. Both Charlize Theron and Seth Rogen are legitimate Hollywood A-listers and have charisma in spades. The versatile Theron, who is best known for her drama and action work, reminds us of her gifts as a comedienne (lest we forget her brilliant arc in Arrested Development), while also making a more than believable politician. Rogen, on the other hand, is working in very familiar territory, playing a variation of his usual character: schlubby and self-defeating, yet likeable. 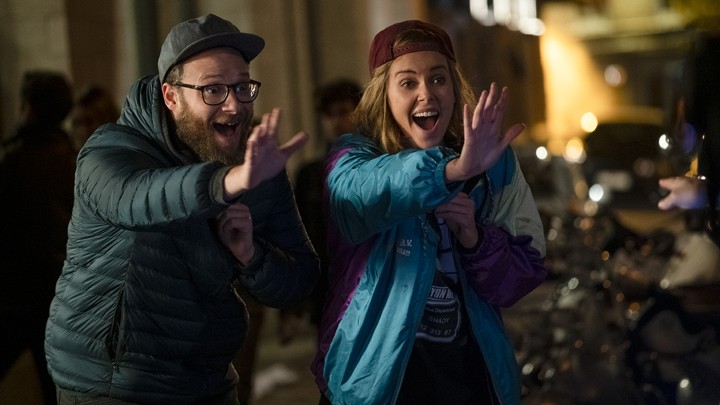 Fred Flarsky (Seth Rogen) takes Secretary of State Charlotte Field (Charlize Theron) out for an undercover night on the town.

The unlikely pairing at the heart of Long Shot is a exaggeration of the generic trope of the highly competent and glamorous woman being matched with the ordinary guy. The goddess and the dad-bod. It is particularly common in those more male targeted romantic comedies of the Judd Apatow era (Knocked Up, Forgetting Sarah Marshall). Long Shot is very much a post-Apatow rom-com. If this film were made twenty years ago, it would have been a safe PG. But in 2019 it is an MA15+, packed with adult humour – by which I mean sex and drugs, not mature. The result is a very funny film which emphasises the comedy more so than the romance, though at times it does unnecessarily overstep in its crudeness. The main complication which must be negotiated in the third act owes more than a little something to There’s Something About Mary.

Yet despite its crude humour and some rather ludicrous scenarios, Long Shot is still a film with something to say. Written by Liz Hannah (The Post) and Dan Sterling (Girls), Long Shot uses Field’s position to highlight the difficult double standards faced by female politicians. It exposes the lengths to which politicians, particularly female politicians, must go to appear attractive and likeable to voters. We see the impossibly high expectations felt by the incredibly accomplished Field to even compete in the public’s eyes with ridiculously less qualified men. How comfortably this message about gender inequality sits with a rom-com plot which presents a less accomplished, less brilliant and less attractive man as her romantic equivalent is up for question. And as they tour the world spruiking her environment plan, the idealist Flarsky gets to rebuke her willingness to compromise on her vision to get deals made. But the film ultimately sides with her, showing Flarsky’s hardline stance to be impractical and ultimately self-defeating, while her more pragmatic approach leads to incremental progress.

With its title Long Shot is asking the audience to prepare themselves for implausibility. The film asks us to embrace not only the fantasy that a powerful, glamorous, intelligent woman about to embark on the most significant and stressful endeavour of her life could fall for a schlubby, rough around the edges guy, but also also the idea that aspiration and honesty could win the day in modern politics. Long Shot is absolutely a film for now, and is in its way just as political as anything going around. It is a film that wants politics to be better than it is. A film which longs for more honesty, more authenticity, more vision from those with political ambitions. It just also happens to be funny, crude and kind of sweet.

Have you seen Long Shot? Leave a comment and let us know what you thought.