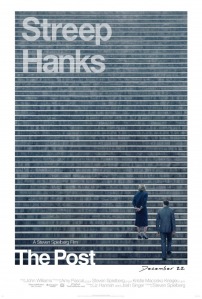 What does it say about the world today that Steven Spielberg, cinema’s great dreamer and entertainer, finds himself compelled to drop everything and make an overtly political film? In presenting the dilemmas and decisions behind the Washington Post’s defiance of a court injunction to publish the Pentagon Papers in 1971, The Post is a film about then that is really about now. For if ever there was a time we needed to be reminded of the importance of the press speaking the truth to and about power, of a free press representing the governed and not the government, this is it.

In 1971, Washington Post executive editor Ben Bradlee (Tom Hanks) notices that New York Times journalist Neil Sheehan hasn’t had a by-line in three months. It makes him nervous. It suggests that Sheehan is working on something big, and Bradlee likes to report the news, not just read about it. Sure enough, on the 13th June, the Times shocks the world by releasing the first details of the Pentagon Papers, leaked documents from the Department of Defence which outline the government’s systematic misleading of the American people for three decades with regards to the Vietnam War. Most damaging is the revelation that the government knew they could not win in Vietnam but continued to send troops in order to avoid the embarrassment of defeat. After two days worth of stories the Nixon administration files an injunction against the Times, preventing them from publishing any further details until a court hearing. Bradlee desperately wants the Post to step in and take up the story, but first he needs to get his hands on those papers. But even if he can, matters are further complicated by the fact that, under the leadership of owner Kay Graham (Meryl Streep), the Washington Post is in the midst of a move to float the company on the stock market. With the public offering, the board doesn’t want anything that could rock the boat, spook investors and impact the share price – something like, say, government action against the paper, with the owner and executive editor being thrown in prison for contempt of court. It ultimately falls to Graham to decide what the priorities of the Post are.

The Post is the latest in a rich tradition of films about heroic journalism. It revels in the romance of the analogue era: typewriters, pay phones, type-setters, people racing to the corner store to buy a newspaper to find out what is happening. Is there anything more cinematic than an old newspaper printing press in action? The comparisons with Alan Pakula’s All the President’s Men are unavoidable – The Post practically serving as a prequel to that film – but this is a different story with a different purpose. Spielberg’s film is less about the process of journalistic investigation, the uncovering and revealing of information, than about the decisions of what to do with the findings. The Post is about ideals more so than drama. With the outcome of the story on the public record and therefore never in doubt, there is no real suspense. So what matters in the storytelling is not what will happen, what choices the characters will make, but rather why they will make them. It is the why that is important in The Post, and it is the why which attempts to serve as rallying cry to the contemporary media to stand up for the same ideals as the titans of the past. 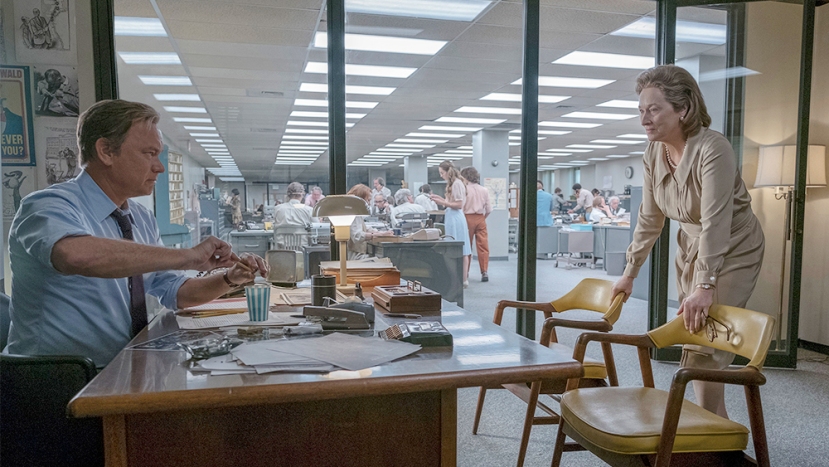 What is most surprising about The Post is that it doesn’t smell of Oscar bait. On the surface it may appear that way – Spielberg directing Streep and Hanks in a serious political drama, a period piece no less, that is in theatres at the end of the year definitely ticks the boxes – but its not. In fact, and this is not meant to be read as a criticism, it doesn’t even feel like their aim was to make a ‘great’ film, a work of art. It feels hurried – again, not a criticism – and to an extent it was. Spielberg reportedly only got the script in February, shooting and editing the film in only six months, while in the midst of post-production on Ready Player One. As a result there is an immediacy to the film. Of course, Spielberg is Spielberg, so he can’t help but make an incredibly watchable, classically ‘good film,’ and cinematographer Janusz Kaminski does a good job of using unusual camera angles and movement to keep things visually interesting even though most of the film takes place indoors. But there is no flash here and it feels like the goal wasn’t to craft a work of art so much as to make a timely statement.

While the focus on the film will naturally fall on its discussion of the role of the free press in keeping a government accountable, The Post is equally timely in its portrayal of gender. Kay Graham is the owner of the Washington Post, a lone woman in a boardroom full of men who have a tendency to look straight through her and openly express reservations about the optics of having a woman as head of the company. She is not a natural leader. It was her father’s newspaper, and he left it to her husband. She only became the boss after his death. Spielberg, working with a screenplay by Liz Hannah and Josh Singer, creates a strong contrast between the characters of Kay and Ben. A grizzled veteran, Bradlee has such determination and bravado in his convictions. She, on the other hand, is racked with uncertainty and self-doubt. Yet while she seems reticent, we see that she too has her convictions. She never avoids her responsibilities and she owns her decisions. While surrounded by advisors, she reminds them that is all they are, and the decision is ultimately hers. Kay’s journey from seeing herself as caretaker of the family’s company to owner and leader of her company is the most profound arc in the film which proves to be Spielberg’s most feminist film since The Color Purple.

Tom Hanks appears to be enjoying himself playing a gruff-voiced newspaperman – though his performance does live in the shadow of Jason Robards Oscar winning performance as Bradlee in All the President’s Men – and Meryl Streep is Meryl Streep, so is very good as the owner balancing seemingly competing obligations. Behind these two heavyweights is a fantastic but somewhat unusual supporting cast with a number of actors from comedic backgrounds – Bob Odenkirk, David Cross, Alison Brie and Zach Woods – playing it straight alongside the likes of Bruce Greenwood, Bradley Whitford and Sarah Paulson.

The Post is a pacy film, moving through the story briskly, before getting a bit schmultzy and sentimental towards the end. One thing Spielberg has always been able to do is make you feel. The Post is not an overly subtle film, but as a plea to the media of today to take up the responsibilities of the fourth estate it is not trying to be.