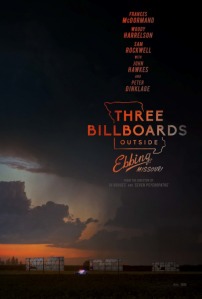 An accomplished playwright and director for the stage with an Academy Award for Best Live Action Short, Irishman Martin McDonagh announced himself as a filmmaking talent to watch in 2008 with his brilliant debut feature In Bruges. However, his third and latest film, Three Billboards Outside Ebbing, Missouri, takes him to a whole new level. A darkly comedic kick in the guts, this exploration of grief, anger, vengeance, but also forgiveness, is a firecracker of a movie that will make you sit up and take notice. Three Billboards is McDonagh’s best work and appears to be the frontrunner in this year’s Oscar race.

Outside Ebbing, Missouri (a fictional town), a trio of dilapidated, old billboards sit on a road rarely used since the arrival of the highway. Local woman Mildred Hayes (Frances McDormand) walks into the town advertising agency and, after rudimentary inquiries about what can and cannot be said on a billboard, puts a $5000 downpayment on the three billboards for a year. In simple black lettering on a red background they are to read: “Raped while dying,” “And still no arrests,” “How come, Chief Willoughby?” Seven months ago, Mildred lost her daughter. No sooner have they gone up the billboards create a scandal in town. While people sympathise with Mildred, they don’t like what they perceive to be a personal attack on Chief Willoughby (Woody Harrelson), a well respected member of the community who is going through a hard time having recently been diagnosed with cancer. In particular, hot-headed simpleton Officer Dixon (Sam Rockwell) objects to this attack on his boss. But while her actions make her a pariah, Mildred is one tough mother, and if this is what she needs to do to put the spotlight back on her daughter’s case then no one is going to stand in her way.

McDonagh has always been a gifted writer of dialogue, but here it is his control of narrative and tone that is most impressive. The brilliance of Three Billboards comes from the way it always opts for the complicated over the straightforward, on both the micro level of individual scenes and moments, and macro level of the narrative as a whole. We, like Mildred, want to be angry at Willoughby. That would be the easier story. But when we meet him, he is sincere in his desire to solve the case but frustrated by the fact the DNA results gave no leads and the trail has gone cold. The narrative takes turns. It defies. It challenges. It doesn’t seek to answer all of your questions, to wrap up all of its loose ends. It sets itself up to be a cold-case mystery story but becomes something much more than that. It is ultimately about this woman’s ability to navigate what has happened. She wants justice and is determined to fight for it but is so clearly consumed by fury that you wonder how it will be satiated. By the film’s conclusion, the closure that we are really seeking is less to do with who committed the crime and more wanting to know that Mildred is going to be able to come through this and live her life.

There is no black-and-whiteness to the morality of the film. Three Billboards asks difficult questions about communal guilt and culpability. Drawing parallels with the Catholic Church’s tacit complicity in the protection of paedophiles, Mildred holds the entire Ebbing community responsible for the death of her daughter through its complacency about finding her killer. Most interestingly, though, it explores the discomfort we have with victims. Mildred goes from being the object of everyone’s pity to the source of their derision as she refuses to move on like everyone else has when the story is no longer news. 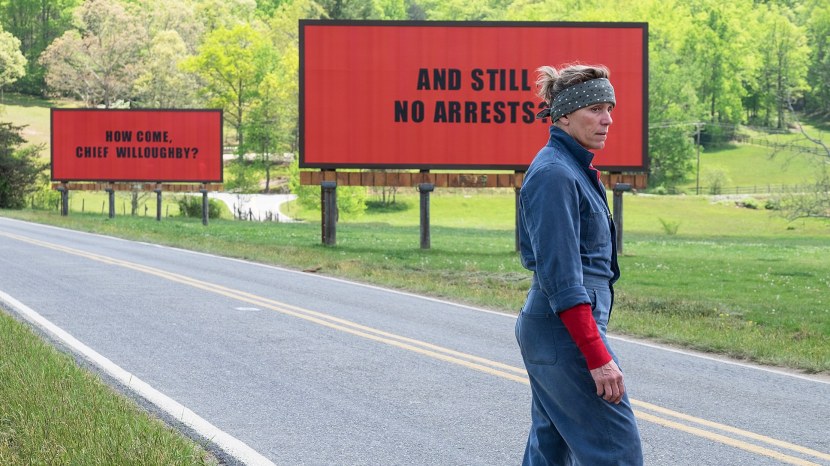 Three Billboards is tonally amazing. McDonagh is known for his ascerbic, darkly comedic sensibility, and while the premise of the film sounds very dark indeed, that comedy is still there. So impactful, at times even devastating, is the narrative that those moments of humour draw really strong laughs from the audience, but do so without undermining the dramatic situation. McDonagh has assembled a brilliant cast – some members of his growing repertory company (Sam Rockwell, Woody Harrelson, Abbie Cornish) and others McDonagh first timers (Frances McDormand, Peter Dinklage, John Hawkes) – who are all gifted both comedically and dramatically. From the top down, these performers are given wonderfully complex and surprising characters to work with. Every character gets a moment to defy your expectation, quite often for the better. In that sense, despite the incredible darkness of the story, there is hope there.

Martin McDonagh, and for that matter his brother and fellow writer-director John Michael McDonagh (The Guard, Calvary, War on Everyone), has traditionally written very male-focused films. Mildred is his first really substantial female character and she is a doozy. Mildred is a force of wrath. She is single-minded. No obstacles will stand in the way of her pursuit of justice. Carter Burwell’s score has a Western quality to it, a sense of determination, positioning Mildred as the gunslinger in this rape-revenge narrative, coming into town to take names. In a conversation with Chief Willoughby in which she confesses to already knowing he has cancer, he asks why then she still put up the billboards. Her matter-of-fact answer: “They won’t be as effective once you croak.” That is insight into the kind of woman she is. And yet in another moment, we see an act of great compassion from her towards Willoughby which shows that he isn’t actually her enemy, just someone she needs to work. Mildred is wonderfully flawed as a character, which makes her all the more interesting to watch. She errs. She makes mistakes. Her anger and fury get the better of her, and she is self-aware enough to know when she has slipped up. It has been 21 years since Frances McDormand won her Oscar for Fargo, and Mildred Hayes could not be further from Marge Gunderson as a character, but her performance is every bit as good.

The other standout is Sam Rockwell. Rockwell is good in everything he does, but rarely has he been given a character like this to sink his teeth into. Dixon is an impulsive hot-head. At one point Mildred makes reference to him being ‘too busy torturing black folks’ to do his job, and while we are never given specific details of his past misdeeds we are frequently reminded that Dixon has a very questionable record in terms of his police integrity. Rockwell’s incredible likability means that we have a complicated relationship with this character who is for much of the film an appalling human being let alone police officer. Rockwell makes us want him to be better, and when Dixon is challenged we find ourselves rooting for him to rise to the occasion.

Three Billboards Outside Ebbing, Missouri crackles. Its anger burns right off the screen. It is wickedly funny, but it is not the lines and the zingers that you are going to walk away from this film with. Rather it is the genuine emotion, grief and compassion that stays with you. A brilliantly assured directorial effort, if Three Billboards doesn’t end up being one of the very best films of the year then it will have been a very good year indeed.

Have you seen Three Billboards Outside Ebbing, Missouri? Leave a comment and let us know what you thought.