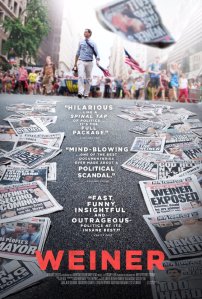 Sometimes the best documentaries happen when things don’t go quite according to plan, when the story the filmmakers end up telling is not the one they set out to. This is definitely the case with and Weiner. When Josh Kriegman (former chief of staff to Anthony Weiner) and Elyse Steinberg approached the disgraced congressman about documenting his 2013 campaign for the mayorship of New York, they probably envisioned a comeback story, a tale of redemption. However they ended up getting much more than they bargained for.

Fiery New York congressman Anthony Weiner resigned in disgrace in 2011 after sending a photo of his penis to a woman using his pubic twitter account. This led to the revelation that he had been exchanging lewd messages and photos with roughly half a dozen women over a period of six years. Less than two years after his public shaming he ambitiously attempted to return to the world of politics by running for mayor of New York. The early stages of the campaign could not have gone better, with Weiner winning over voters with his fierce devotion to the issues and his self-deprecating humility in acknowledging the mistakes of his past. But just when things were looking up, everything crumbled. The scandal reared its head once again with the release of previously unseen, more graphic photos, and the revelation that he had continued to connect with women, this time under the pseudonym ‘Carlos Danger,’ after his resignation from congress and public apology. So with that, we have front row seats to a political campaign in full-blown crisis mode, watching the scandal unfold from the inside with complete and unfettered access.

When the Anthony Weiner scandal first broke in 2011 the jokes practically wrote themselves. I mean, come on. His name is Weiner. But Kriegman and Steinberg make a concerted effort to present us with the person and the politician, rather than the punchline. Instead of the headlines and the scandal, we are introduced to him through a rage-filled speech he made on the House floor, railing against Republicans who were trying to block a bill which would provide healthcare assistance to 9/11 first responders. This sets the tone for his portrayal as a passionate and gifted politician, albeit a personally flawed and self-destructive one. What makes Anthony Weiner such a fascinating subject for a documentary is that many of the characteristics that made him a charismatic and engaging politician also contribute to his downfall. He is a supremely confident man, but that confidence becomes arrogance and, ultimately, delusion. He is a hot-head, a firebrand. Unafraid of a fight, but also unable to work out when he is better served to walk away. Through it all, there remain elements of him that are admirable. While there are comedic moments that verge on the farcical (for example the execution of a plan to sneak Weiner into an event through the neighbouring McDonalds so as to avoid a confrontation with one of this previous online conquests who is waiting outside the venue with cameras), Weiner is ultimately a tragic tale precisely because we see a man with such promise, clearly a gifted politician, who just keeps getting in his own way.

But Weiner is not just a film about Anthony Weiner. The incredible access we are given – and there are moments when you simply cannot believe they are letting it be filmed – capture not only the man at the centre of this storm, but the people around him. The people who are also affected by his actions. Namely his staff and his wife, Huma Abedin. When the shit hits the fan, we see the palpable sense of betrayal among the young team of staffers who had decided to give him a second change and had made themselves believe in him. And then there is Huma. A top aide to Hilary Clinton, and obviously an incredibly capable woman, she becomes the film’s primary victim. While there is some car crash pleasure in watching Weiner’s campaign go down in flames, you feel no such pleasure in watching what it does to his family. Huma is torn between loyalty to her husband and consideration for the effect allegiance to him will have on her own professional standing. Most of all though, she just looks worn down and defeated. While Anthony Weiner is fast to point out he never physically cheated on his wife, the film leaves you in no doubt as to the effect his actions have on her.

Weiner provides a unique look behind the scenes of political life at the most trying of times. Equal parts train wreck and tragedy, the end result is entirely compelling.

Have you seen Weiner? Leave a comment and let us know what you thought.