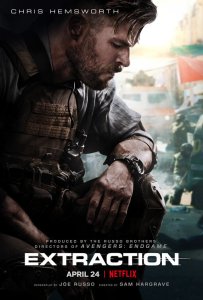 With the exception of prestige productions like Roma and The Irishman, original movies from streaming companies have tended to be viewed as the contemporary equivalent of the old straight-to-video release. But with the world’s cinemas forced the close their doors by Covid-19 and Hollywood holding back their big budget releases in the hope of being able to recoup some of their investment down the track, Netflix, Amazon and the like find themselves the only show in town. The result is that a film like Extraction, a generic actioner which sees former Marvel stunt coordinator and second unit director Sam Hargrave making his directorial debut, ends up with more eyes on it than it might have otherwise anticipated.  END_OF_DOCUMENT_TOKEN_TO_BE_REPLACED