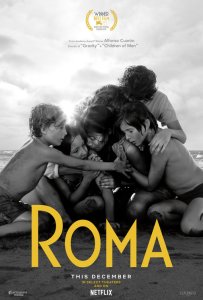 The idea that filmmaking, despite being an inherently collaborative pursuit, could be considered an outlet for the personal artistic expression of the filmmaker has been fundamental to its acceptance as a legitimate art form. Those directors whose work shows a personal stylistic signature or set of themes are revered as auteurs and those works that are strongly autobiographical are given a privileged place in their oeuvres. Usually, though, these autobiographical films come toward the start of a filmmaker’s career. In the case of Roma, however, Mexican director Alfonso Cuaron returns to a more personal, intimate place, having already established himself as a filmmaker, combining popular and critical success with the likes of Gravity, Children of Men and Harry Potter and the Prisoner of Azkaban.

Cuaron takes us back to the Mexico City of the early 1970s, to the Colonia Roma district – hence the title. While drawing extensively on his childhood, rather than making the children or a specific surrogate self the focus, Roma is inspired by the women in his life. Young Mixtec woman Cleo (Yalitza Aparicio) works as a maid for an upper-middle class family. With father Antonio (Fernando Grediaga), a doctor, constantly away at work, mother Sofia (Marina de Tayira) turns to Cleo for help wrangling her four children (Diego Cortina Autrey, Carlso Peralta, Marco Graf, and Daniela Demesa). Dutiful and devoted to her job, Cleo is accepted as part of the family. As we follow Cleo over the period of approximately one year, we see the bond between her and Sofia strengthened as both women go through parallel relationship struggles –  Antonio failing to return from a supposed business trip and being spotted in town by the children with his mistress, and Cleo’s boyfriend Fermin (Jorge Antonio Guerrero) disappearing off the face of the earth after she tells him she is pregnant.

In Cleo, Roma follows a character who would not ordinarily serve as the centre of a film. While loved by the family she works with, Cleo is a person who to most of society would be invisible, disregarded. She hardly says a word and internalises most of her emotions. The casting of an unknown, non-professional actor in Yalitza Aparicio means she also doesn’t draw our gaze in the same way that a movie star might. In staying true to her as a character, Roma is not a plot driven film. We are not seeing Cleo on a mission towards achieving a particular goal. Rather, we witness a selection of moments and events which, when viewed together, paint a picture of her life. And it manages to be engrossing. It manages to be incredibly emotional despite being entirely unmelodramatic.

While some have sought to draw connections between Roma and the Italian neorealist movement of the 1940s due to its black and white cinematography, long takes, use of non-professional actors and interest in working class characters, Roma is too consciously stylised a film to be considered neorealist. With his usual cinematographer, three time Oscar winner Emmanuel Lubezki, unavailable, Cuaron added cinematographer to a list of responsibilities that included writer, director, producer and editor. Rather than playing it safe and simple, Cuaron uses the camera masterfully. With a slow pace enforced by numerous long takes, Cuaron takes time to let you watch things unfold, yet his camera remains dynamic, panning and tracking with great precision to capture these moments. A more apt point of comparison might be Schindler’s List in the sense that both films see a director employing a skillset forged in the cinema of spectacle in service of a seemingly smaller, more personal story. Cuaron brings to Roma the same control of the depth and movement of the camera, and resulting sense of scale, that made Gravity and Children of Men so affecting.

While being humble in focus, Roma still feels like a big film. Cuaron creates a real sense of the world beyond the immediate story we are being told. Eugenio Caballero and Barbara Enriquez’s production design is outstandingly detailed not only within the family home, but in filling out the world outside. Set in the early 1970s, Mexico City is a powder keg of student protests in the lead up to the infamous Corpus Christi massacre. Like the actor who learns their lines so that they can forget them, Cuaron orchestrates elaborate set pieces featuring hundreds of extras to realise these clashes, only to shoot them through a partially obscured window. These events are happening within the world Cleo lives in but they are not what our story is about.

While traditionalists will argue that a film as beautiful as this deserves to be seen on a big screen – and there is an argument that its slow pace and underplayed narrative benefits from the heightened engagement and lack of distraction the cinema setting provides –  its release through Netflix makes Roma accessible to a far broader audience than the limited theatrical run this type of film would ordinarily have received, as well as making the multiple viewings the film seemingly demands in order to really absorb it a more realistic possibility. Its streaming release also appears not to have negatively impacted its award chances, with ten nomination positioning it as the Oscar frontrunner, putting it in a strong position to become the first film from a streaming service to win Best Picture.

Have you seen Roma? Leave a comment and let us know what you thought.