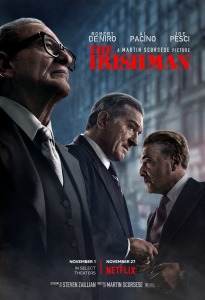 One of the American cinema’s most revered auteurs, Martin Scorsese’s career has been marked by a series of long-gestating projects. The Last Temptation of Christ, Gangs of New York and Silence all sat with the filmmaker for many years before he was finally able to realise them. Likewise, his latest film, The Irishman, spent twelve years on his to-do list. The result of that time, though, is a film which, technologically and tonally, he likely could not have made a decade ago. Based on Charles Brandt’s I Heard You Paint Houses, it tells the story of Frank Sheeran, a mafia hitman who claimed to have murdered the Teamster leader Jimmy Hoffa. The Irishman brings Scorsese back to the gangster genre with which he is intrinsically linked, but offers a different perspective. Where Mean Streets was a young man’s film, alive and overflowing with energy, The Irishman is an old man’s film, introspective and contemplative.

Having started a new job as a meat truck driver, World War II veteran Frank Sheeran (Robert De Niro) quickly makes connections in the Philadelphia underworld with his willingness to overlook the occasional box of steaks disappearing from his deliveries. Showing himself to be capable of a lot more than theft, it is not long before he has become one of mafioso Russell Bufalino’s (Joe Pesci) most trusted hitmen. Through Bufalino Sheeran, meets Jimmy Hoffa (Al Pacino), President of the International Brotherhood of Teamsters and ‘the second most powerful man in America,’ who is in need of a personal bodyguard. Hoffa has found himself firmly in the sights of newly minted Attorney General Bobby Kennedy, who is determined to bring him up on corruption charges, a prospect which infuriates Hoffa in part given the important role the mob played in getting Bobby’s brother into the White House. Over time, Sheeran progresses from being Hoffa’s bodyguard to his general right-hand man and confidant. But as Hoffa and Bufalino’s goals start to come out of alignment with each other, Frank finds himself caught between the two.

From its opening moments, a long tracking shot through the corridors of a nursing home coming to rest on an ageing Frank Sheeran who commences recounting his story to an unseen observer, The Irishman sees Scorsese cracking out the old playbook. Mobsters, voiceover, moving camera, freeze frames, masterful music cues and detailed period production design all contributing to a stunningly realised world. The foundation is laid for another Scorsese gangster epic. But over the course of its 209 minute runtime – the longest non-documentary of his career – it evolves into something else. Something which is a little less Goodfellas and a little more Silence. By far Scorsese’s least romantic take on the mafia lifestyle, this is a film about isolation rather than community, and where Scorsese’s previous gangster films have never shied away from the brutal consequences of that way of life, here those consequences become spiritual. With filmmaker and character alike bringing the perspective of later years, The Irishman offers a meditation on ageing, death and mortality. 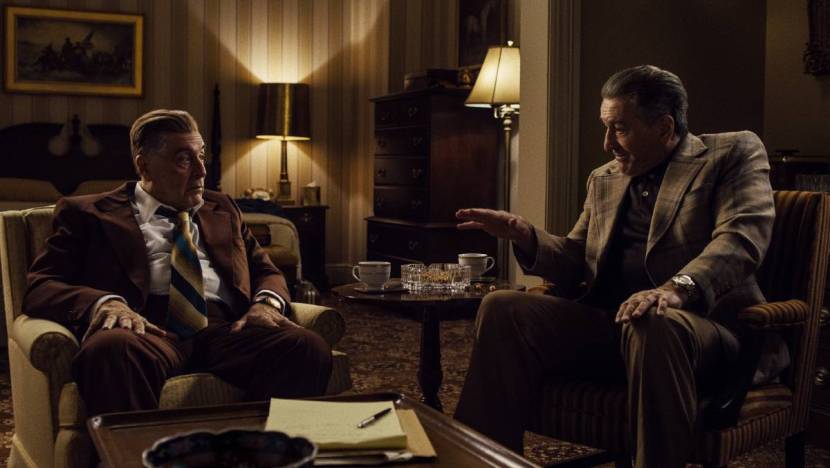 Eagerly anticipated on a number of fronts – Scorsese’s reunion after 24 years with De Niro, his first collaboration with Pacino, Pesci’s return to the big screen after nearly a decade of retirement – the chief curiosity leading into The Irishmen was its use of digital de-ageing technology. Despite the narrative spanning a number of decades, Scorsese was determined to use the same actors across the different time periods. Rather than casting a younger actor and ageing them with makeup, he wanted to go the other way, using digital technology to allow older actors to play their younger selves. It was an idea that caused the budget for the film balloon to US$160m, resulting in the project moving to Netflix, whose business model is less invested in the direct relationship between budget and box office than the major studios necessarily are. The results aren’t perfect. As with Samuel L. Jackson in Captain Marvel, there remains an issue with these de-aged characters still moving like old men. However, those moments when you do really notice it only serve, like slight of hand magic, to distract you from the numerous other moments where it is being used seamlessly to great effect.

Of course, the entire purpose of this approach is to allow three heavyweights of the screen to deliver layered performances, and in that regard it does not disappoint. De Niro, in an understated performance, sells both the discomfort of a man with torn allegiences, and the spiritual tragedy of his decay. Pacino, who has become a broader actor over the last couple of decades, relishes the opportunities for bluster and bombast that playing Jimmy Hoffa provides. The most striking performance, however, comes from Pesci. The complete opposite to his powder keg from Goodfellas, Russell Bufalino is a picture of quiet control. He is rational, measured and strategic. Soulful but scary.

Around this central trio are solid supporting roles from the likes of Ray Romano, Bobby Cannavale and Harvey Keitel, with Stephen Graham being the scene stealer as rival gangster Tony Provenzano, the role Pesci might have played 30 years ago. While Anna Paquin’s presence in the film as Frank’s daughter Peggy has been oversold – this is a heavily male dominated story even by Scorsese’s standards – her character, particularly in the younger iteration played by Lucy Gallina, is a significant presence as it is Peggy’s distrust and discomfort around her father that is our first indication of what Frank’s choices are costing him.

Epic in scope and length, The Irishman’s runtime may prove a challenge for those watching on Netflix, with the temptation to pause and break it into sessions being strong. But this is a movie that requires immersion, a willingness to sit with its rhythms. While an auteur’s body of work is marked by recurring thematic preoccupations, with the greats rather than this being repetitious, it takes the form of an evolving examination of an idea. Realistically, we are in the final stages of Scorsese’s career, but far from being a case of the director simply playing the hits, as The Irishman unfolds, it gives us something new, adding to this five-decade wrestle with themes of organised crime, Italian-American masculinity and spirituality.

Have you seen The Irishman? Leave a comment and let us know what you thought.