END_OF_DOCUMENT_TOKEN_TO_BE_REPLACED

The little death, la petit mort, is a French euphemism for an orgasm. Actor Josh Lawson’s directorial debut, The Little Death, a romantic comedy about sexual fetishes, explores some of the weird and wonderful ways people get to that point.

We follow four ordinary couples living in a Sydney neighbourhood, each dealing with their own sexual issue. For Paul and Maeve, it is sexual masochism. She reveals her fantasy about being forced into sex by a stranger, leaving mild mannered Paul to try and fabricate a situation in which he can surprise his wife with an attack. For Evie and Dan, their therapist has suggested role-playing may help them get in touch with their emotions, but the scenarios get side-tracked as Dan catches the acting bug. For Phil and Maureen it is somnophilia. Their marriage is on the rocks, but when Maureen accidentally takes one of Phil’s extra strong sleeping pills, he sees his wife still and silent and falls in love with her all over again, starting an evening affair. For Rowena and Richard it is dacryphilia. Their efforts to get pregnant has taken the passion out of sex, but when Richard receives some bad news, Rowena finds herself strangely aroused by his tears so must continually find ways to make him cry. These stories are all tied together by a man, new to the neighbourhood, who goes door to door, using homemade nostalgic biscuits to distract his new neighbours from his legally required pronouncement that he is a registered sex offender.

The Little Death is not your typical sex comedy. It manages to be frank and explicit without being gratuitous or childish. These are suburban middle-class folk in committed relationships, not randy frat boys, and while the film does get some big laughs out of its exploration of different fetishes, it also explores themes of morals, normality, and communication within a relationship. We see characters who are so ashamed of their fetish that they create elaborate lies and even admit to far worse accusations in order to hide the truth.

Lawson’s screenplay does walk a very fine line. There are some divisive elements which will leave some audiences conflicted. The most obvious of these is the inclusion of a woman’s rape fantasy. While Lawson treads carefully in this area, it is a controversial and confronting concept, and at the very least it would seem a misstep that this is the first couple, and thus first fetish, that is introduced.

As is common in these types of films, some of the storylines work better than others. Despite some beautiful and very funny moments, The Little Death does struggle a bit for rhythm in tying those scenes together. Lawson possibly tries a bit too hard to connect the different storylines together into a neat Love Actually package, with the attempts to intertwine the stories becoming messy when the thematic connection on its own is sufficient.

With so much effort having gone into weaving these four storylines together, it is then a surprise to find one scene, concerning a fifth pairing, which stands alone at the end of the film. Monica works as a translator at a service that makes phone calls for deaf people. Sam, a deaf-mute, Skypes in and requests that Monica call a phone sex line for him. While usually a scene that struggles to find its place would be destined for the cutting room floor, this scene ends up being hands down the best of the film. Riotously funny, the scene strangely becomes a genuinely touching and lovely moment of connection between two people. It is my favourite singular movie moment of the year.

While some audiences will struggle to get on board with the concept, and the film has peaks and troughs, when The Little Death is good it is very good, and there is more than enough in The Little Death to suggest that Josh Lawson could be an interesting comedic voice in the future.

Have you seen The Little Death? Leave a comment and let us know what you thought. 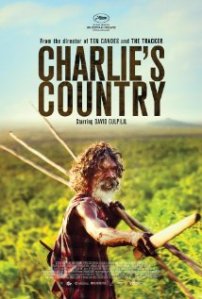 Charlie’s Country is the third collaboration between iconic Aboriginal actor David Gulpilil and director Rolf de Heer, after The Tracker and Ten Canoes. Together the three films form an informal trilogy, exploring the Indigenous experience at different points in Australia’s history. Charlie’s Country is the first of these films to be set in the present day and the most personal of the collaborations.

Charlie lives in a government controlled rural community in Arnhem Land. The first image we see in the film is a Liquor Act sign, declaring this to be an alcohol restricted community. While Charlie enjoys largely congenial relationships with the local white police, there is an undeniable tension simmering beneath the surface. He grows increasingly frustrated with the trying to live under the Intervention’s “white fella” rules. The white doctor tells Charlie that for the sake of his health he has to stop eating the white junk food, the only food available in town. But when Charlie goes hunting to catch his own food, “real food,” the white police confiscate his gun and fine him for recreational shooting. When he carves himself a spear, that too is confiscated as a dangerous weapon. In frustration, Charlie leaves the town to return to his country and live the old way, only to find that world no longer exists.

David Gulpilil’s performance as Charlie is the heart and soul of this film. It has been rightly earning critical praise around the world, including winning Best Actor at this year’s Cannes Film Festival. The actor delivers a captivating performance as a disenfranchised man, caught between two worlds, unable to exist in either. Gulpilil was a co-writer on the film and the character obviously draws heavily on his own life experience. The film was first formulated while Gulpilil was serving time in prison and subsequently in a drug and alcohol rehabilitation centre.

Charlie’s Country explores the tension that occurs when one culture is imposed over another. Where Warwick Thornton’s Samson and Delilah sought to shine a light without pointing a finger, Charlie’s Country is much more didactic. This film comes from a place of Indigenous frustration. In the colonialist world the film depicts, white influence is seen in the form of drugs, alcohol, guns, junk food and laws. While the first half of the film, set in Arnhem Land, is really engrossing, the second half, set in Darwin, is weaker and significantly less subtle in its exploration of these issues. A Darwin doctor asks if he can call Charlie by his first name because “I have difficulty pronouncing foreign names.” It’s a good line, but about as subtle as a sledgehammer.

A slow paced film – it feels longer than it is – Charlie’s Country is a pointed indictment of contemporary Australian Indigenous relations, highlighting the unworkable imbalance that exists between white law and Indigenous culture in the Northern Territory.

Have you seen Charlie’s Country? Leave a comment and let us know what you thought.

Canopy is an Australia/Singapore co-production shot on location in the beautiful Singaporean jungle which announces debutant director Aaron Wilson as a potentially interesting new voice in the Australian cinema.

It’s 1942 and Singapore is under attack from the Japanese. An Australian fighter pilot, Jim, crashes into the jungle and finds himself alone and unarmed in enemy territory. He crosses paths with a Singapore-Chinese soldier, Seng, in a similar predicament and the two join forces in the hope of getting out alive.

A far cry from the adventures, epics or men-on-a-mission stories we usually get from the war genre, Canopy endeavours to tell a smaller more human story in these most trying of circumstances. In their fight for survival, Jim and Seng experience a basic human connection despite the fact two men don’t speak each other’s language so communication is limited.

While Canopy is the first feature from young Australian director Aaron Wilson ,he has previously made a number of short films and it shows. Canopy has a bit of a short film feel to it (it has a runtime of only 84 minutes). It is a very simple story told in a minimalist fashion. A smaller budget war film is naturally going to be restricted in what it can show on screen, so must come up with other devices. In the case of Canopy the sound design is very important to the film’s effectiveness. Wilson’s use of sound creates an immersive cinematic experience as we are placed in Jim’s subjectivity. We only see the things he sees, but we also hear the things he hears; birdsongs, the rustling of bushes, the pops of gunfire, the overhead hum of fighter planes, the far off sounds of explosions. The terror and uncertainty of his experience in the jungle comes from the fact that he can hear things that he can’t see, and the film allows us to share that experience.

This subjectivity extends to the relationship between the two characters. As mentioned, there is very little dialogue in the film as the two characters don’t share a language. While Seng talks significantly more than Jim, we are not given subtitles for his dialogue so we don’t come to know him any better than Jim does.

The film’s conclusion is a bit disappointing, not as a result of providing an unsatisfactory resolution to the narrative but rather due to its lack of clarity. It was not until scrolling through the names in the final credits that I was actually able to decipher what the ending was seeking to represent.

While Canopy is unlikely to make an impact at the box office – its business will be done on the festival circuit – the recent success of Gravity and, to a lesser extent All is Lost, has seen the subgenre of the single character survival drama achieve some prominence recently, and while Canopy is a significantly more modest film that either of those, it is none the less an interesting addition to the subgenre.