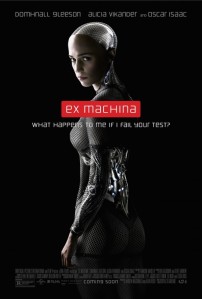 When we think science fiction films we tend to think big – space travel to distant worlds, scope and spectacle. But quite often the best science fiction films are small. Ex Machina, from the Latin phrase meaning “from the machine,” is such a film and marks the directorial debut of British screenwriter Alex Garland, best known for his screenplays for 28 Days Later and Sunshine, and his novel The Beach.

Caleb (Domhnall Gleeson) is a low level programmer working for tech giant, Blue Book. Through an in-company lottery he wins the chance to spend a week with the company’s enigmatic CEO and programming legend, Nathan (Oscar Isaac), at his remote Alaskan mansion and research facility. Upon arrival Caleb discovers that he is not there for a week of hanging out with the boss but to assist Nathan in his latest research endeavour, artificial intelligence. Nathan has produced a humanoid robot, Ava (Alicia Vikander), and he wants Caleb to put her through a Turing test. The Turing test (named for the British computer scientist Alan Turing, subject of Oscar winner The Imitation Game) tests a machine’s ability to exhibit human behaviour. A human interacts with a machine and if the human does not know that it is a machine, artificial intelligence has been achieved.

Of course, a Turing test is supposed to be blind. You are not supposed to know if you are talking to a human or a machine. By having Caleb sit opposite Ava to interview her that element of uncertainty is gone. As Nathan explains, the real test is to show Caleb that Ava is a machine and still have him believe that she has consciousness. This is the case for us as viewers too. Production designer Mark Digby and costume designer Sammy Sheldon Differ have designed Ava in such a way that we are always aware that she is a machine. Truly a sight to behold, Ava has a human face with which to speak and emote, and human hands with which to touch and feel, but the rest of her body is translucent and obviously mechanical. That we, like Caleb, can see that she is a machine challenges us when we start to empathise with her and see her humanity.

The traditional position of the cinema, and to a large extent society, when it comes to artificial intelligence has been one of suspicion. Is it playing with fire? Will it only result in our downfall? We’ve seen this idea reflected in great science fiction films like 2001: A Space Odyssey, Blade Runner, and other cautionary tales of Promethean hubris. While Ex Machina is open to such interpretation, Garland appears to choose a different position. His film is affectionate towards artificial intelligence. Instead of fearing Ava the more we learn about her, we increasingly empathise with her. We even start to side with her against human characters. Where Ex Machina does reflect contemporary concerns is in touching on ideas of personal information and meta-data. Nathan reveals to Caleb that the secret to his cracking of artificial intelligence lay in Blue Book, the Google-style search engine that he designed and built his company on. He realised that search engines don’t just show us what people are thinking but how people are thinking.

While stepping into the director’s chair for the first time here, Garland still considers himself first and foremost a screenwriter, and this film clearly plays to those strengths. Ex Machina is a classic chamber piece – a film involving a small number of characters in a limited environment, interacting over a short period of time. As such character interaction and psychology becomes very important. This is a film built around discussions: discussions between Caleb and Ava as they try and work each other out, discussions between Caleb and Nathan as the younger man tries to understand the motivations of the elder. That said, Garland doesn’t overfill his film with dialogue. He has confidence in his ability as a director to allow significant moments of silence and important interactions to take place without dialogue. Some of Ex Machina’s most striking moments are dialogue-free. Garland also masterfully withholds and reveals information, creating tension and mystery. Like Caleb, we always feel like there is more to the situation than we are currently aware of.

Largely a three-hander, the performances are impressive across the board. Oscar Isaac is an actor on the rise and is sure to become a superstar when Star Wars Episode VII comes out later this year. His Nathan is an alpha male, able to make Caleb instantly feel intellectually and physically inferior. Isaac, with a full beard and buzz-cut head has a menacing presence, unsettling both Caleb and the viewer. But he battles with Ava to be the most engaging presence on screen. Swedish actress Alicia Vikander is a former ballerina, and this shows in the grace and poise with which she holds herself. There is a stillness in her performance which helps manifest Ava’s artificiality, but there is also a sexuality to her character which becomes increasingly important as the narrative progresses. While Caleb is shown to be quite brilliant, he is the comparative everyman in this trio when put next to Nathan and Ava. As such Domhnall Gleeson’s work is not as eye catching as his two co-stars but none the less solid.

Shot on a modest budget of approximately $15 million, the production team has clearly spent that money in the right places. The script and characters are strong, and the visuals are striking without being extravagant. While it does stumble slightly in the third act – an issue that has occurred in previous Garland screenplays – Ex Machina is an elegant, intelligent and engaging piece of science fiction cinema.

Have you seen Ex Machina? Leave a comment and let us know what you thought.