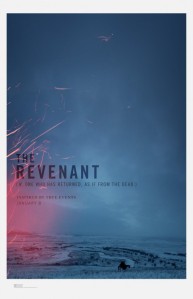 Upon receiving the Golden Globe for Best Director for The Revenant, Alejandro G. Iñárritu said, “Pain is temporary, but a film is forever.” It is a mantra that he has obviously willed himself to believe because the stories from set in Canada suggest this ambitious frontier epic will earn its place alongside Francis Ford Coppola’s Apocalypse Now and Werner Herzog’s Fitzcarraldo as one of film history’s most arduous and challenging shoots. The film is an endurance test, for its crew, for its characters and even, in the best possible way, for its audience.

A revenge Western – though Iñárritu insists that it isn’t a Western – based in part on the 2002 novel by Michael Punke, The Revenant tells the incredible “true” survival story of frontiersman Hugh Glass. In 1823, Captain Andrew Henry (Domhnall Gleeson) leads a group of fur trappers through the Rocky Mountains on a quest for pelts. Hugh Glass (Leonardo DiCaprio) is charged with navigating them safely through this dangerous territory, but is mauled to within an inch of his life by a grizzly bear. Unable to transport him home but unwilling to abandon him or finish the job, Henry calls for volunteers from their party to stay with Glass until he passes and give him a Christian burial. Glass’s half-Native American son Hawk (Forrest Goodluck) and well-meaning youngster Bridger (Will Poulter) volunteer, as does, after the promise of a cash reward, Fitzgerald (Tom Hardy). But Fitzgerald has never seen eye to eye with Glass and has little interest in hanging around for too long. He murders Hawk in front of his father and then tricks Bridger into leaving Glass for dead. But Glass refuses to die.

Iñárritu’s last film, the Oscar winning Birdman, was set entirely within the corridors and rooms of a theatre and had a slightly claustrophobic feel. The Revenant is entirely the opposite, an agoraphobic film which makes you feel trapped by sheer space. It is a visceral, sensory experience, from its sound design and score, to Emmanuel Lubezki’s amazing cinematography. We are exposed to the elements. While shooting entirely in natural light, Lubezki achieves a similar effect to what he did for Alfonso Cuarón in Gravity, making the landscape simultaneously breathtakingly beautiful and terrifying.

There are two sequences warrant specific mention. The film opens with a frantic scene in which the fur trappers are ambushed by a gang of Pawnee Indians. Steven Spielberg and cinematographer Janusz Kamiński redefined battle cinematography in the Omaha Beach sequence of Saving Private Ryan by using shaky handheld camera and quick cuts to recreate the terror of the soldiers. Iñárritu and Lubezki have rewritten the rules again, achieving a similar sense of terror through long, smooth moving shots. Lubezki’s camera moves through the action, from character to character. It is an incredible 360 degree experience in which you never know from where the next arrow or threat will come.

The other scene that will stay with you is the bear attack. Glass is alone in the woods. He hears some rustling, turns around and spots two bear cubs. Straight away we know he is in trouble, because where there are cubs there is a protective mother. Again, rather than frantic, quick cutting in which everything is a terrifying blur, Iñárritu chooses to slow things right down, using long, sustained takes. He lets us see everything. It is brutal and perversely fascinating. From a low angle, level with Glass’ prostrate body, we experience the changing rhythm of the attack: the furious clawing and biting of his back, neck and limbs, but also slower moments where the bear sniffs, and even sits on, her prey. It is one of the most horrifying and remarkable scenes ever captured – or rather created as it is an amazing achievement of special effects – on film.

It has become something of a running joke that Leonardo DiCaprio is desperate to win an Oscar, despite the fact that the man himself has done nothing to fuel such speculation other than doing consistently good and demanding work. With his supremely committed performance as Hugh Glass, this could just be Leo’s year. It is an incredibly physical performance. It is primal. There is no inner monologue and seldom anyone for Glass to talk to. So we just watch. We watch him crawl through the mud and the snow. We watch him eat the raw liver of a bison. We watch him strip and climb into a fresh horse carcass to stay warm. In short we watch him fight. With his thirst for vengeance seemingly the only thing keeping him alive, Glass shows a singlemindedness we haven’t seen in a Western since John Wayne’s Ethan Edwards in The Searchers (with another nod to that film coming from a reversal in which the trappers are constantly being pursued by a band of Pawnee searching for a daughter who was taken from them). However, the extreme nature of DiCaprio’s performers covers over the ft that there isn’t actually much of a character there other than suffering and stoicism.

Tom Hardy, on the other hand, creates a full and fleshed out character as the duplicitous and mercenary Fitzgerald. While continuing his penchant for almost indecipherable accents, Hardy creates a genuinely disturbing antagonist with a self-interested determination every bit as powerful as Glass’s drive. Domhnall Gleeson also continues his big year, adding his solid turn as Captain Henry to roles in Ex-Machina, Best Picture nominee Brooklyn, and Star Wars: The Force Awakens.

The title, The Revenant, refers to one who has returned, specifically one who has seemingly returned from the dead. In a film that is in so many ways primal and animalistic, in meditative moments Iñárritu is eager to explore this spiritual element. He introduces short dream sequences and hallucinations which attempt to tie Glass’s suffering and dispossession to the experience of the Native Americans. How successfully he does this is another matter, but the attempt is there to expand the scope of the story.

The Revenant is a bleak and brutal film. There is a frankness to its violence, very confronting but never glamorised or played up for shock value. Yet as gruelling as the film can be, it is also beautiful and, in a peculiar kind of way, even life affirming. It is a bold and ambitious piece of work from a filmmaker keen to push the boundaries.

Have you seen The Revenant? Leave a comment and let us know what you thought.

The Christian film industry is stepping it up a gear.
This arrived in the mail yesterday and I am devouring it (by the standards of a slow reader like myself). It is a really accessible, readable account of the way women were pushed out the film industry after having got on at the ground floor, and how their contributions were written out of history. Particularly interesting if you are familiar with the ‘traditional’ telling of film history that this provides a counterpoint to. Bravo @heleno84. I’ve got some classes to redraft for this semester. #womenvshollywood
Looks like I’m going to have to re-up that AppleTV+ subscription when the free year expires. Damn you Ted Lasso.
For the first time in, I don’t know, ever, the top three spots at the Australian box office are held by Australian films. With Long Story Short #LongStoryShort just released could it be four next week?
Raiders of the Lost Ark on 35mm at @hornsbyodeon
Shadow in the Cloud is sick! Came in not knowing what to expect and I loved it so hard. It has big B-movie energy and knows exactly what it is, but is so well executed. Some really cool storytelling choices. Moments of sublime stupidity, genuinely surprising twists and high-five-the-person-next-to-you action beats. Take a bow Roseanne Liang and Chloe Grace Moretz.
Arcadia Twin Cinemas, Ulladulla.
What do we reckon? I’ve seen WW84 and TheDry. Promising Young Woman is on my to do list, but do I see Shadow in the Cloud? Is it the right kind of stupid?
Just watched 2046. That Wong Kar-Wai knows how to make a beautiful film.