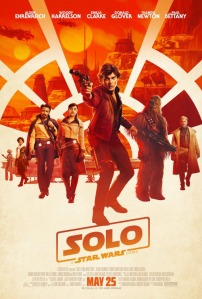 One of the things which made the original Star Wars trilogy the site of such intense fandom is that it created the sense of a universe that was bigger than just what we were seeing in the story. Through the details of different planets and aliens that we glimpsed it provided incredible scope for the imagination to run wild. It is this potential that Disney is trying to tap into with their Star Wars ‘anthology films’ – those films which are not classified as episodes of the central saga. Ron Howard’s Solo: A Star Wars Story is the second on these anthology films, after 2016’s Rogue One.

While fighting with the Imperial infantry on Mimban, young Han Solo (Alden Ehrenreich) and his new, wookie friend Chewbacca (Joonas Suotamo) fall in with a group of smugglers led by Tobias Beckett (Woody Harrelson). END_OF_DOCUMENT_TOKEN_TO_BE_REPLACED