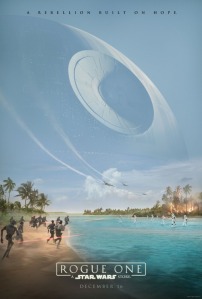 While The Force Awakens was a massive success last year, becoming the third highest grossing film of all time, it is Gareth Edwards’ Rogue One that represents the first real test for Disney’s audacious plan for the franchise it took over in 2012. While being a rollicking fun ride, The Force Awakens was also a noticeably safe first step, with its heavy focus on nostalgia and unashamed recycling of story elements from the original trilogy. Rogue One, on the other hand, is the first of the stand-alone Star Wars films – stories from a long time ago in a galaxy far, far away which focus on characters outside of the central saga.

Rumours are spreading through the galaxy that the Empire is building a weapon capable of destroying planets (while its name is not spoken until a reasonable way in, those familiar with the series will know straight away to which weapon they are referring). Jyn Erso (Felicity Jones) is broken out of an Imperial prison by members of the Rebellion. They have heard that her father, Galen (Mads Mikkelsen), who designed the weapon for the Empire, has sent a message to her former guardian Saw Gerrera about a potential weakness in the weapon which could be used to destroy it. After verifying this is indeed the case, Jyn and a rag tag bunch including morally ambiguous rebel captain Cassian Andor (Diego Luna), temple guardians Chirrut Imwe (Donnie Yen) and Baze Malbus (Wen Jiang), and reprogrammed Imperial security droid K-2SO (Alan Tudyk) set off on a daring mission to steal the plans and deliver them to the rebellion.

Rogue One tells the story of what immediately preceded the original Star Wars, the story of how the Death Star plans came to be in the hands of Princess Leia in the first place. It is a film more concerned with the ‘how’ than the ‘what.’ We already know where this film is going so the interest lies in how it gets there. The plot has some pacing issues, and is somewhat convoluted for the first hour, but when it settles into being a World War II-style men-on-a-mission movie it takes off. It also finally reconciles a key stumbling block of the original film – what seemed at best a terrible oversight, and at worst a contrived convenience – how it is that the Death Star could have such a glaring and disastrous weak spot.

While we can quibble about how stand-alone this film really is when its narrative is so interwoven with that of A New Hope, Rogue One is intended to be something different, or at least a different take on something familiar. That difference is announced from the outset when the film does away with the iconic crawl and fanfare. In fact, Rogue One is the first Star Wars film not to be scored by the great John Williams, with Michael Giacchino stepping into the role and playing with Williams’ motifs. Director Gareth Jones (continuing his rapid career rise which saw him jump from the low budget sci-fi Monsters to Godzilla to Rogue One), does a great job of playing with the Star Wars iconography so that we experience it in a new way. We see the Death Star upside down, we see a Star Destroyer hovering over a city, we see the AT-STs from Return of the Jedi in an urban environment and the AT-ATs from The Empire Strikes Back in a tropical environment. Familiar but different. The effects work is really strong and the act three battle on the tropical planet of Scarif is as good as anything the franchise has to offer.

Unfortunately, Rogue One’s focus on story comes at the expense of its characters. There is an admirable attempt at racial diversity made in the casting, with not only faces but accents from all over the world. These new characters, however, fail to make the impact that the new trio of Rey, Finn and Po did in The Force Awakens. This is a problem as the characters are supposed to be your way into the story. With the exception of blind martial artist Chirrut Imwe, who has some crowd pleasing moments, and K-2SO, who is far and away the sassiest droid in the galaxy, the other characters are largely pretty bland. Ben Mendelsohn’s Orson Krennic ends up being more insecure middle-management than iconic villain. The most significant piece of casting, and one of the film’s major talking points, is the return of Peter Cushing, who died in 1994, to the role of Grand Moff Tarkin through the magic of CGI. Ethical questions about the appropriateness of reanimating someone and using their likeness without their consent aside, the inclusion of Cushing as a supporting character rather than a quick cameo simultaneously shows both how far the technology has come and also how far it still has to go.

Ultimately though, the thing that makes Rogue One different not only from the other Star Wars movies but from almost every blockbuster of a comparable size in recent history is the sense of liberation that comes from the impossibility of a sequel. With the events before and after the story already decided, there is no requirement to keep all future options open and therefore narratively anything is possible and, in terms of their mission, the stakes are very real.

Rogue One isn’t as fun as The Force Awakens, and despite being chock full of Easter Eggs for observant fans, it isn’t trying to be. More war movie than space opera, Edwards is clearly going for a different, more sombre tone. While the film is not without problems, it is a solid start for expansion of the Star Wars franchise.

Have you seen Rogue One: A Star Wars Story? Leave a comment and let us know what you thought.