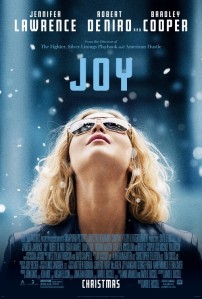 As stated in its opening titles, Joy, is “based on true stories of daring women.” It explores the way a tenacious woman manages to survive and eventually thrive in a world determined to put her in her place. This semi-fictionalised account of the life of Joy Mangano, inventor of the Miracle Mop makes a point of never actually using the phrase “Miracle Mop,” or even the stating the surname Mangano. Rather than presenting a traditional biopic, director David O. Russell has opted for a comically exaggerated fable celebrating the American Dream and tenacious, can-do spirit.

Joy (Jennifer Lawrence) was a creative young girl from whom a lot was expected but for whom things haven’t quite panned out. Seventeen years after being named high school valedictorian she is stuck in a hole, providing for her chaotic family END_OF_DOCUMENT_TOKEN_TO_BE_REPLACED