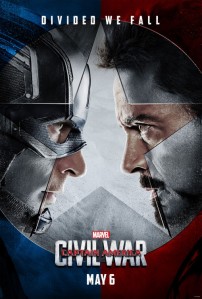 Eight years and thirteen films into the Marvel Cinematic Universe, Captain America: Civil War suggests that rather than growing stale, the MCU is maturing and starting to really explore the possibilities afforded to it by this interwoven, serialised form of cinematic storytelling.

When a mission in Wakanda goes awry and innocent lives are lost, questions are again asked of the culpability of the Avengers. Coming after even grander scale destruction in New York, Washington DC and Sokovia, this is final straw. “Victory at the expense of innocents is no victory at all,” declares the Wakandan King. Secretary of State Thaddeus Ross (William Hurt, reprising his role from the forgotten MCU film, The Incredible Hulk) presents the Avengers with the Sokovian Accord, signed by 117 nations, which seeks to place them under the jurisdiction of the United Nations. END_OF_DOCUMENT_TOKEN_TO_BE_REPLACED