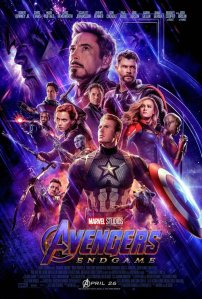 “Part of the journey is the end,” says Tony Stark (Robert Downey Jr.) into a recording for his wife as he floats through space in a powerless ship with food and water supplies depleted and oxygen not far behind. While Avengers: Endgame by no means marks the closing of the Marvel Cinematic Universe – Disney is not walking away from that cash cow any time soon – there is a sense in which  it marks the end of something. Endgame is not a movie. This cinematic event is the culmination of the boldest experiment in big screen, long-form narrative the cinema has ever seen. That claim may sound hyperbolic, but we are talking about twenty-two interwoven films released over an eleven year period. Episodes in an ongoing narrative featuring upwards of ninety recurring characters, which have grossed a combined US$20.9 billion dollars and counting. As such, any attempt to critique Endgame in isolation, as a singular text, is almost as pointless as it is futile. The success or failure of this film is determined entirely by its ability to pay off that eleven year journey that invested fans have been on. In that regard, Anthony and Joe Russo’s film is an unqualified success. END_OF_DOCUMENT_TOKEN_TO_BE_REPLACED