Starring: Anyone and everyone from the history of Australian cinema and politics

In the 1920s, Soviet filmmaker Lev Kuleshov conducted a series of experiments in which the same image of a neutral male face was screened alongside different images. A bowl of soup. A child in a coffin. A reclining woman. In each instance the audience interpreted the neutral expression in a different way. The man was hungry. He was sad. He was lustful. From these experiments came one of the foundational principles of cinematic language: the meaning of shots was not static, but changed based on how those shots were arranged. This principle of meaning creation, and in particular recreation, through juxtaposition is used to startling effect in the explosive mashup piece Terror Nullius.

Part video art, part political satire, Terror Nullius is the product of siblings Dominique and Dan Angelero, a Sydney born, New York based, art duo known as Soda_Jerk. The film is a collage which blends together scenes and images from the history of Australian cinema with clips and soundbites from Australian politics in order to challenge national mythologies. The concept of national identity has been central to discussions of Australian cinema from both a critical and policy perspective since the 1970s when the federal government intervened to revitalise a film industry that had become virtually non-existent. Australian cinema has been used to craft and present an image of Australianness to ourselves and the wider world. With Terror Nullius, Soda_Jerk invites us to see familiar images in a different light, reusing our films to tell a different story of Australia, a truer and altogether more confronting story.

In seeking to address the inherent misogyny and racism that exists within many of these projected mythologies, and shining a spotlight on our country’s current refugee policy and historical treatment of indigenous peoples, Soda_Jerk is bringing a sledgehammer to these ideological debates. The film aspires to many things, but subtlety is not one of them. As a result, Terror Nullius was unsurprisingly the source of controversy when it premiered in March. On the eve of its premiere at the Australian Centre for the Moving Image, the Ian Potter Cultural Trust, who had invested $100,000 in the project, withdrew its support stating that it did not want to be associated with what it described as “a very controversial work of art.” But whatever you might think about its political perspective, there is no denying the brilliance of its execution. 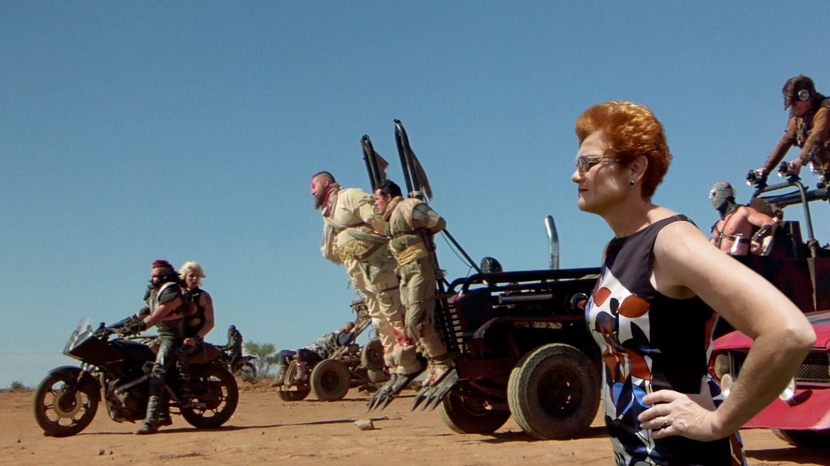 Despite its palpable sense of anger, on a stylistic level it is defined by an overwhelming playfulness. We open with the eerie, panning, landscape shot from Wake in Fright accompanied by David Gulpilil’s opening narration from Ten Canoes. We see a conversation between Priscilla’s Bernadette and Please Like Me’s Josh Thomas in which they discuss the treatment of Australia’s indigenous people. We watch the asylum seekers from Lucky Miles arrive on the beach only to be greeted by Russell Crowe’s neo-nazi Hando from Romper Stomper. We see the bondage gear clad Humungus from Mad Max 2 delivering John Howard’s “We will decide who comes to this country and the circumstances in which they come” speech. The film’s most striking sequence sees iconic women from Australian cinema – among them Muriel and Rhonda from Muriel’s Wedding, Delilah from Samson & Delilah, a young Nicole Kidman from BMX Bandits and Olivia Newton John in full Sandy mode from Grease – revolting against misogyny, taking out their fury on Max Rockatansky and his iconic V8 Interceptor. Whether the texts that are brought together complement each other seamlessly or jolt us to laughter with their harsh juxtaposition, the combinations always bring a new interpretation to the original material with which we have some familiarity.

Despite all of its footage being repurposed and the collage methodology being relatively familiar, Terror Nullius still strikes you as incredibly original. With its duelling high and low art impulses, this wildly creative work defies mainstream conceptions of what cinema should be. It is not a narrative piece, but nor is it a documentary. Yet despite its relatively avant garde form, its reference points and humour make it incredibly accessible. Obviously, the more Australian cinema you have seen the more layered your appreciation of Terror Nullius will be, but missing some of the references will not prevent you from grasping the arguments that it is making. This critique of Australia through a celebration of its audio visual culture may require some hunting down as it is unlikely to be available through the usual channels, but if the opportunity to see it presents itself it is well worth taking.

Have you seen Terror Nullius? Leave a comment and let us know what you thought.