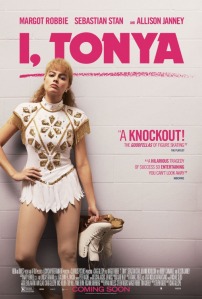 Sporting villains don’t come much greater than Tonya Harding. In the lead up to the 1994 Winter Olympics, rival figure skater Nancy Kerrigan was injured in an attack found to have been orchestrated by Harding’s husband. It was one of the most outrageous sporting scandals in history and brought Harding an infamy far exceeding the profile of her sport. For the many who have only ever known Tonya Harding in relation to “the incident,” Craig Gillespie’s I, Tonya serves as interesting background to one of sports most notorious figures. With an entirely different energy to your traditional biopic, I, Tonya is Goodfellas if it were set in the world of competitive figure skating and populated entirely by morons.

On the ice, Tonya (Margot Robbie) was a natural. She started winning competitions at the age of four and as she grew it became apparent that she could do things on the ice that others simply couldn’t. However, cut from the same rough cloth as her single-mother LaVona (Allison Janney), she was also not your typical figure skater. An unashamed redneck, Tonya was the rough in a field of diamonds. The higher up the levels she rose, the more the judges struggled to look past her unconventional music choices and homemade costumes. In 1986 she became the first American woman to attempt and successfully pull off a triple axel in competition, but even then she struggled for recognition in the shadow of figure skating’s golden girl Nancy Kerrigan (Caitlin Carver). So her husband Jeff (Sebastian Stan) and his friend Shawn (Paul Walter Hauser) mastermind – the term is used ironically here – a plot to get Tonya a competitive advantage in the lead up to the Winter Olympics.

While the title suggests a first person account, we are actually presented with numerous narrators, each providing their version of the events in interviews twenty years down the track. The film opens with the statement, “Based on irony free, wildly contradictory, and totally true interviews with Tonya Harding and Jeff Gillooly,” which sets us up for the fact that all of their stories don’t fit neatly together. With its suite of unreliable narrators, I, Tonya plays with ideas of truth, memory and history. As the action is played out there are moments where characters will break the fourth wall looking directly to camera to assure us that what we are seeing did actually happen, or in some situations, definitely did not. Rather than seeking to uncover the truth from all these contradictory stories, Steven Rogers’ screenplay seems more interested in revelling in the grey. It is a wild story made all the wilder by the fact we can’t trust any of the people telling it to us.

Tonya is presented to us as the white-trash, rock ’n’ roll figure skater. She swears, she chops wood, she likes trucks. Despite her undeniable talent she is the antithesis of the graceful, elegant image of figure skating and that makes her an outsider. In this regard I, Tonya is a classic sporting underdog story. But nor is Tonya Harding Rocky Balboa, the admirable figure to rally behind. Gillespie and Margot Robbie take this character who we loved to hate and make us sympathise with her. Seeing her as a victim of her upbringing, we too wish that it could just be about the skating. The rough but sympathetic performance is a real coming out for Margot Robbie, who plays Tonya between the ages of 15 and 44 and did much of her own skating – though the triple axel had to be done with CGI as even twenty years on there still aren’t enough people in the world who can do it to get a stunt double. Robbie grabbed attention in The Wolf of Wall Street and showed that she can be a movie star with Suicide Squad, but here she shows us what she is really capable of.

The other eye-catching performance is Allison Janney as Tonya’s rough-as-guts mother LaVona. An abusive, no-nonsense woman with a viper tongue, Janney makes full use of her amazing comic timing in bringing LaVona to the very precipice of caricature – her interview footage is even done with a parakeet on her shoulder. A case study in destructive parenting, LaVona, whether motivated by love or a potential cash cow, believes she is doing what her daughter needs in order to succeed, even if it means she hates her for it.

I, Tonya’s energy stems from its active camera, some fun if a little obvious soundtrack choices, and a tone which maintains some genuine laughs while dealing with pretty dark material. Where this tone becomes challenging is in the film’s treatment of domestic violence. As a child Tonya was abused by her mother. As a young woman she was abused by her husband. Gillespie takes a very matter-of-fact, arguably flippant approach to this violence, with some scenes seeming to play the abuse for laughs. While this sounds in poor taste, and will trouble some viewers, it is consistent with the perspective of Tonya, at least of the character as presented in the film. For her, this abuse was a part of life. It was unremarkable. It was how she accepts the world working and an obvious contributor to her lack of self-worth. Violence begets violence. But in those moments when the story is being told from her perspective, it therefore makes sense that the abuse would be entirely undramatic.

Oddly, it is when we finally reach ‘the incident,’ which Tonya acknowledges “is what you all came for,” that the film starts to drag. Partly this is because the recounting of the incident sidelines the two most engaging characters, Tonya and her mother, in order to focus in on the collection of boobs involved in executing that mission. Mainly, though, it is because by this point our focus has changed. This isn’t a film about the incident. It is a film about a person. It is a narrative about conformity and conventionality, and what happens when someone refuses to fit in or be cast out. These characters are rough around the edges, and in a way they are unpleasant to spend two hours of your life with, though that is kind of the point. That was how Tonya was seen in that community. But she deserved their attention, and I, Tonya deserves ours.

Have you seen I, Tonya? Leave a comment and let us know what you thought.