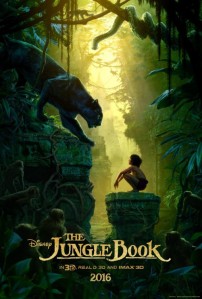 Disney has always had a knack for squeezing every last dollar out of their intellectual property. Their most recent endeavour has been to recreate their classic animations as live action films for a new generation. We’ve had Maleficent (a reimagining of Sleeping Beauty), Cinderella and now The Jungle Book. But to call Jon Favreau’s film live action would seem a bit of a stretch when Mowgli himself is the only live element on screen.

Scripted by Justin Marks, this Jungle Book draws in equal parts from Rudyard Kipling’s original stories and the 1967 Disney animation which is, for so many people, the definitive version. Bagheera the panther (Ben Kingsley) narrates the tale of Mowgli (Neel Sethi), a man-cub raised by wolves in the jungles of India. While a much loved member of the pack, Mowgli develops slower than his brothers and sisters. Behaviours that are to them second nature need to be learned by him, and he is constantly being scolded for his tricks – using tools to solve problems rather than doing things the wolf way.

When the tiger Shere Khan (Idris Elba), who wears the scars of his last interaction with man, discovers that a man-cub is living in the jungle he demands that Mowgli be turned over to him. The pack decides that the only way to keep Mowgli safe is for Bagheera to take him to the nearest man-village where he can be with his people. So we follow Mowgli on his episodic journey to the man-village as he encounters a layabout bear with a honey obsession (Bill Murray), a hypnotic snake (Scarlett Johansson) and the gigantopithecus – a kind of colossal orang-utan – with a desire for fire (Christopher Walken).

The first thing that strikes you about The Jungle Book is the setting. The film starts with one continuous shot which takes us from Sleeping Beauty’s castle in the Disney logo into the jungle of India. Yet as the the end credits proudly proclaim, the movie was “filmed in Downtown Los Angeles.” Neel Sethi never set foot in an actual jungle but you wouldn’t know it. This is the most sophisticated digital landscape work in a live action film since Avatar. What it is missing, however, which Avatar had, as did Pixar’s The Good Dinosaur last year, are those ‘wow’ moments where you are simply overwhelmed by the beauty of the animated landscape. Favreau doesn’t give you those moments to simply soak in the view. The flip-side of this, though, is that The Jungle Book refuses to overindulge with the technology, always using it to service the story rather than as an ends in itself.

The computer generated animals are every bit as impressive as the settings they are placed in. The animated jungle creatures look photographically real, if slightly exaggerated in size in keeping with the perspective of a child. The Jungle Book employs ‘classic’ computer animation (a strange phrase) rather than motion capture. Rather than their faces taking on human emotive qualities, these creatures convincingly talk while always remaining entirely animal. The result is more akin to a very sophisticated Babe than Dawn of the Planet of the Apes.

The voice cast who bring these animal characters to life has some serious star power, but is also really well cast. Idris Elba is fierce and powerful as Shere Khan, while Bill Murray’s Baloo brings some lightness to the film just when it needs it. Christopher Walken is menacing as King Louie, part Colonel Kurtz, part New York mafia don. Scarlett Johansson is seductive as the hypnotic Kaa and Lupita N’yongo gives strength and dignity to the mother wolf, Raksha. The late Garry Shandling even appears as an anxious porcupine.

This is a less cartoonish film than the original in more senses than just the visual. A closer alignment to Kipling’s story and the increased presence of Shere Khan, who is a looming threat over the whole picture, has combined with the more realistic visuals to create a darker tone. This tone then bumps heads awkwardly with the film’s musical heritage. The approach to the musical numbers is the one facet of this Jungle Book which lacks clarity of intent. Only two of the songs have been retained from the 1967 musical, the iconic ‘Bear Necessities’ and ‘I Wanna Be Like You.’ Despite being half an hour longer than the original  this remake features four less songs. ‘Bear Necessities’ is underplayed, feeling more like two characters singing to themselves to fill time than a musical number, which means that when we get to Christopher Walken’s menacing rendition of ‘I Wanna Be Like You,’ well over an hour into the movie, it really sticks out. Either be a musical or don’t be a musical. The awkward fence sitting compromise feels like just that. Ultimately though, the film doesn’t forget where it has come from and finishes with a lovely nod to the Disney original with the closing of the storybook and more traditional renditions of the songs over the end credits.

The Jungle Book is a sincere and heartfelt film, with stunning visuals and real emotional depth. It represents the high point thus far of this current crop of Disney remakes.

Have you seen The Jungle Book? Leave a comment and let us know what you thought.

See @littlewomenmovie. It might just be perfect.
Merry Christmas
Skyfall in Concert at @sydneyoperahouse. I’ve never done one of these before. Pretty cool.
A great day of screenings to round out three years with AFTRS class of 2019.
Thank you, @boredolives. #Shining #overlookhotel
My worlds colliding. #theboss #scorsese
Had an impromptu ‘bring your daughter to work day’ today. This little star is surely now the youngest co-lecturer in @aftrs history.
Guest appearance in the Masters today, prattling on about interwoven universe storytelling.
Watched Picnic at Hanging Rock for the first time in ages today. It’s a strange and wonderful film.