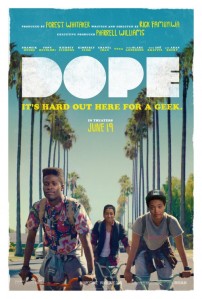 Dope means a lot of different things and so Rick Famuyiwa starts his film with a series of definitions of its title. Dope is an illicit drug. A dope is an idiot. Dope is slang for something cool. All of these definitions prove relevant to the funny and energetic film that will follow.

Malcolm (Shameik Moore) is a black geek with a single mother growing up in “The Bottoms” in Inglewood, surrounded by gangs and drug dealers. He is obsessed with 1990s hip hop culture, with a flat top hairstyle pulled straight from the old episodes of “Yo, MTV Raps” he watches online. With his friends Jib (Tony Revolori from The Grand Budapest Hotel) and Diggy (Kiersey Clemons) he is into “white people shit” like good grades, BMX riding and Donald Glover. The three of them are in a punk band called Awreeoh (a play on Oreo, a slang term for someone who is black on the outside and white inside).

Malcolm is very smart kid. He has college interviews coming up and has set his sights on Harvard, despite his school advisor suggesting that is somewhat of an arrogant aim for someone coming from where he is from. Somehow, Malcolm gets invited to the birthday party of local drug dealer Dom (A$AP Rocky), an event he would not have considered attending were it not that Nakia (Zoë Kravitz), a local girl who has caught his eye, would be there. When that party is broken up by a shootout with rival drug dealers Malcolm escapes to find that someone has stashed a large quantity of ecstasy in his backpack. These warring factions are then in a race to retrieve the drugs from him.

Dope feels like a nineties teen coming-of-age comedy with a difference. Still a comic tale of a young man trying to find his voice, the difference comes from his circumstances. Malcolm is growing up in Inglewood and because of that he is not going to have the same story as a high school kid in a John Hughes movie. As Malcolm explains, life is “a daily navigation between bad and worse options.” Where he comes from missteps can have very serious consequences. On multiple occasions Famuyiwa shows us how quickly situations can escalate into violence and danger.

Dope explores themes of appearance, of perception and reality. In one scene Malcolm is presented with two crocodile skin bags, one real and one fake, and asked to pick the real one. The dealer tells him it actually doesn’t matter which is real and which is fake, because people’s assumptions will be guided by who is carrying it. If a rich, white girl carries it, everyone assumes that it is real. If someone like Malcolm carries it, everyone assumes that it is fake. Famuyiwa uses this theme to engage with the idea of race and the assumptions and perceptions that come with it. This is seen in the way Malcolm and his friends are carefully crafting their image, and the sense of irony in their relationship to their blackness. It is evident in the way people’s expectations of Malcolm seem influenced more by his appearance and background than by his academic brilliance. Towards the end of the film Malcolm delivers a really interesting monologue, in the form of his personal essay for his college application, which comments on race, appearance and expectation: “So why do I want to go to Harvard? If I was white would you even have to ask that question?”

At times Dope struggles to find balance between quite distinct tones: high school comedy, crime caper and ‘hood drama. For much of its runtime Famuyiwa is shooting for quirky funny, but at points things get quite sad. Malcolm is a brilliant kid born into a disadvantaged situation and you can see the way that circumstance seems to be conspiring to prevent him from meeting his potential.

Dope has some reasonable muscle behind it. Forest Whitaker, who starred in Famuyiwa’s previous film, Our Family Wedding, acts as producer and narrator, while Sean “P-Diddy” Combs and Pharrell Williams are among the film’s executive producers. Pharrell Williams also wrote the songs Awreeoh performs in the film which gives the songs some real punch, but does make it difficult to believe they are the products of a high school trio – at least of a high school trio for whom this band is only a side endeavour.

Dope has a playful energy, some strong ideas, and though it stumbles a little in trying to stick the landing, Famuyiwa’s film offers an interesting, alternative voice to what we hear from mainstream Hollywood.

Have you seen Dope? Leave a comment and let us know what you thought.