Known as ‘The Master of Suspense,’ Alfred Hitchcock was one of the first genuine superstar directors. As well as being a popular success, he is undoubtedly one of the true masters of the cinematic medium. Hitchcock was a central figure in the 1950s revaluation of the popular Hollywood cinema by the critics at Parisian film journal Cahiers du cinema who saw the potential for legitimate artistry in a commercial, studio context. With a career spanning six decades and transitioning from the UK to Hollywood, from silent film to sound, and from black and white to colour, Hitchcock has arguably done more than any other director to shape contemporary commercial filmmaking. 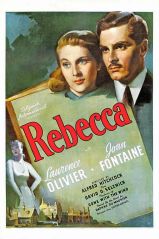 This 1940 adaptation of Daphne Du Maurier’s novel about a young bride living in the shadow of her husband’s deceased wife was Hithcock’s first American film and the only film he ever made to win an Academy Award for Best Picture. The film, brilliant as it is, is not as unmistakably Hitchcock as his work in the 1950s largely because his combination with producer David O. Selznik, hot off the heels of Gone With the Wind, meant there were two strong authorial presences on the film. Selznik’s influence results in a film with a much more typical classical Hollywood feel. A haunting piece of gothic cinema, George Barnes won an Oscar for his cinematography which featured strong use of deep focus photography a year before Orson Welles famously employed the technique in Citizen Kane. The way in which Hitchcock and Barnes shoot the De Winter mansion, Manderlay, was clearly an influence on Welles’ approach to shooting Xanadu in his masterwork.

Adaptations from the stage, particularly those which take place in a single setting, often have a tendency of feeling decidedly uncinematic. The fact that Hitchcock manages to avoid that stagey, theatrical feel in his adaptation of Frederick Knott’s play is in itself an impressive achievement. Already an excellent film, Dial M for Murder becomes an absolute masterpiece when you see it as it was intended to be seen, in 3D. Hitchcock’s inspired use of the 3D format brings the shot compositions to life and creates a real sense of the space and geography of the apartment in which the film almost exclusively takes place. It is a testament to his mastery as a filmmaker that his one 3D film, made 60 years ago, is still one of the finest examples of the potential of the format. Dial M for Murder was also the first of three films Hitchcock would make with Grace Kelly. 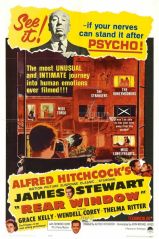 1954 was clearly a brilliant year for Hitchcock as he followed up Dial M for Murder with one of his most enduring masterpieces, Rear Window. The story of a photographer cooped up in his apartment while his broken leg heals with only watching his neighbours to keep him entertained embraces the voyeuristic appeal of the cinema like no other film before or since. The entire film is from a single point-of-view: that of L.B. Jeffries’ apartment window looking out into an incredible purpose-built New York tenement set. From his apartment we watch different lives unfold before us. More to the point we watch Jeffries watch. Through the like of Miss Lonelyheart, Miss Torso, the songwriter, the fire escape couple, the newlyweds and, of course, the suspicious Lars Thorwald, Hitchcock finds the perfect blend of suspense and comedy and captures the complete spectrum of the joy we take from voyeurism.

While it was not initially well-received critically, Vertigo has gone on the become Hitchcock’s most celebrated film. In fact, in 2012 the picture managed to unseat Citizen Kane from the number one position in Sight and Sound’s top ten poll for the first time in 50 years. An incredibly disturbing and unsettling film, it takes one of American cinema’s most loved and likeable figures in James Stewart and makes him disconcertingly maniacal. With Hitchcock being a director renowned for controlling relationships with his leading ladies, the manner in which Scotty seeks to mould, shape and control Judy as he tries to transform her into his dream woman can be read as representative of Hitchcock’s own relationship with women. On the stylistic front, the simultaneous zoom in and pan out used to such great effect in Vertigo has become a much imitated technique (see Jaws).

North by Northwest is the classic Hollywood blockbuster. It has big names, spectacle, action and thrills, and it exemplifies Hitchcock’s ability to turn out high-quality commercial fare. It is also the best film to come out of Hitchcock’s four-film, eighteen-year collaboration with Cary Grant. The story of an advertising executive who is mistaken for a spy, North by Northwest is one of the more extreme examples of Hitchcock’s fascination with the innocent protagonist swept up in a situation beyond his control. The film also provides some of the most iconic images not only of Hitchcock’s oeuvre but of Hollywood cinema, firstly with Cary Grant being swooped by a crop duster and secondly with the films climactic chase scene on the faces of Mount Rushmore.

With Psycho Hitchcock took a largely forgettable novel by Robert Bloch and transformed it into the most influential and imitated horror film ever made. Killing off a main character at any point is a bold move, but only a filmmaker of Hitchcock’s stature and self-assurance could get away with killing off his main character in the first third of the film. A masterstroke, it throws convention out the window, turns the movie on its head and tells the audience that anything is possible. To make sure audiences got the full effect, Hitchcock insisted that cinemas enforce a strict policy of not allowing people in once the film had started in case they missed Leigh’s appearance. While Jaws made people afraid to go in the water, Psycho made people afraid to have a shower.