After 13 years and five films which have between them grossed US$4.9 billion internationally, we have reached the final instalment in Peter Jackson’s adventures in Middle Earth, The Hobbit: The Battle of the Five Armies.

There is no time for a “previously on The Hobbit” recap as this final instalment gets straight into the action, picking up directly from the moment that The Desolation of Smaug ended, with Laketown under attack from the awakened dragon. While some ingenuity from Bard the Bowman brings the downfall of Smaug, Thorin and his companions hole up in the halls of Erebor, fortifying the entries to protect their gold. But the news of Smaug’s death spreads quickly and with Erebor and its stores of gold no longer under the dragon’s protection it is up for grabs. So armies of dwarves, elves, men and orcs – with a fifth to come later – arrive on the scene to stake their claim on the mountain and its treasure.

Despite being the titular character, in this final instalment Bilbo Baggins is relegated to a supporting role. The Battle of the Five Armies is Thorin’s film. This is a tale of the corrupting power of greed. Once Thorin finds himself King Under the Mountain and inside the treasure stores of Erebor, he is overcome with ‘dragon sickness,’ an intense paranoia and protectiveness of his gold. His integrity is sacrificed as he questions the loyalty of his companions, and his unwillingness to keep his word in reimbursing the people of Laketown for their assistance is central to the descent into war. This shift in character focus is a bit unfortunate as Bilbo remains the most interesting character in the film, thanks largely to Martin Freeman’s wonderfully understated performance. Richard Armitage on the other hand does his fair share of scenery chewing as Thorin, particularly in those scenes where he is suffering from ‘dragon sickness.’

The travelling company reached their destination towards the end of The Desolation of Smaug, so where the first two instalments were journey films The Battle of the Five Armies has a different feel to it. It is a war movie. Smaug (who remains the crowning achievement of the film’s CGI team) is defeated in the first fifteen minutes of this film and the rest of its runtime is devoted to preparations for battle and the battle itself. As such, we see a shift in the prominence of different characters. Those interchangeable dwarves thankfully take a backseat in this film, with the spotlight more focussed on those characters who can fight: Bard, Fili and Kili, the elven trio of Tauriel, Legolas and Thranduil. The battle itself commences at about the 70 minute mark and accounts for the majority of the second half of the film.

At 144 minutes, The Battle of the Five Armies is the shortest of all the Middle Earth films by quite some margin. And importantly, given how long the first two Hobbit films felt, it moves quite quickly. It doesn’t feel like a two and a half hour movie. This action heavy film really is all go, to the point that some elements even feel a bit rushed. That said, with the battle taking an hour of screen time as we cut back and forth between different skirmishes and characters, battle fatigue will become an issue for some viewers. The Battle of the Five Armies also doesn’t make the same errors that the final instalment of the Lord of the Rings trilogy did in dragging out its ending.

The Battle of the Five Armies will again be released in High Frame Rate 3D – the film is recorded and projected at 48 rather than 24 frames-per-second – and it is still a terrible way to see a film. The peculiar high-definition movement looks like a cross between a computer game and digital video and is very unforgiving on costumes and makeup.

When Jackson first decided to venture back into Middle Earth for The Hobbit the original plan was to divide it into two films, and with the benefit of hindsight you can’t help but feel that would have been the right call. However, while some will see it as a cynical money grab, in the wash-up I’m more inclined to see this undeniably flawed trilogy as the work of a devoted fan who was so enamoured with the material and the world that he had helped create that his desire to spend as much time as possible there perhaps clouded some of his better judgement.

Have you seen The Hobbit: The Battle of the Five Armies? Leave a comment and let us know what you thought.

It is fun to be back in Middle Earth and the world of The Lord of the Rings again. It is great to see Ian McKellen back as Gandalf. Andy Serkis again steals the show as Gollum. It is nice, if completely unnecessary, to see Elijah Wood as Frodo again. But be warned, Lord of the Rings this is not, which is unfortunate as it is not going to be able to avoid comparisons.

The Hobbit: An Unexpected Journey follows the same narrative formula as The Lord of the Rings. Again we have a motley crew making their way across the countryside, encountering all manner of foe, on a journey to an ominous mountain. However, the problem for The Hobbit is that there just isn’t enough at stake in this story. In The Lord of the Rings you have these grand themes of good and evil at play, and the fate of the world rests on the shoulders of this small company on their mission. In The Hobbit we have a dozen dwarves who want their home and their gold back. It doesn’t quite compare. In The Lord of the Rings, they had no choice but to go on. In The Hobbit you feel like if things really got too hard they could just decide to give up and life would go on. The only times we get a sense of bigger themes at play are in scenes which point towards the events of the events of The Lord of the Rings trilogy. The difference between the two is that The Lord of the Rings is a genuine epic, whereas The Hobbit is a rollicking adventure story. But in trying to maintain a consistent tone, Jackson is trying to force an epic tone on The Hobbit when he may have been better served to have a bit more fun with it. It is a children’s book after all.

As an aside, I couldn’t help but notice the similarities between the poster below and that of The Muppets which I hoped may have indicated an attempt to lighten it up a bit, but outside of a couple of moments, not really. 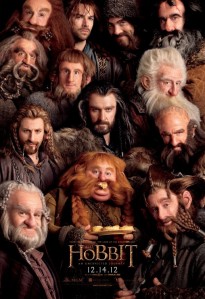 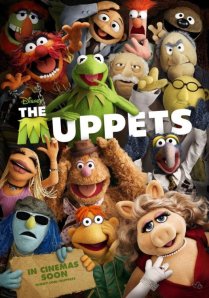 Martin Freeman is very likeable as Bilbo Baggins and the better scenes in the film, for mine, feature him prominently, in particular the scene with the three trolls deciding how they will cook up the band of dwarves they capture, and, of course, Bilbo and Gollum’s game of riddles. Richard Armitage is strong and moody as Thorin, but with the exception of a couple you will have trouble differentiating between the dozen dwarves in the band. Unlike The Lord of the Rings where each member of the fellowship had a distinct persona, in this case they are largely interchangeable.

When it was first announced that The Hobbit was going to be made as a two part film, and then later revised to three parts, eyebrows were raised. When Jackson made The Lord of the Rings, he took an enormous work, which was already a trilogy, and had to be really selective in terms of what he included and what he left out in order to fit it into a trilogy of films. With The Hobbit Jackson has taken one book, which is significantly shorter than The Lord of the Rings, and has stretched it out to three films, and unfortunately that stretching shows. At 169 minutes, the issue with The Hobbit: An Unexpected Journey is not so much that it is long, but that it feels unnecessarily long. It feels stretched out. I can’t see there being a special extended edition DVD of this film because it is hard to believe Jackson has chosen to leave anything out. Anyone who found the last half hour of Return of the King frustratingly drawn out will find themselves infuriated by how long it takes An Unexpected Journey to get started. First there is a prologue of about 20 minutes which seems to have been put in there solely to get Elijah Wood back on screen as Frodo, and that is followed by another 20 minutes of dwarves arriving at Bag End. So you are about 45 minutes into An Unexpected Journey before the unexpected journey begins. I wouldn’t be surprised if, when the trilogy is finished, a competent reader could read Tolkien’s novel in less time than it would take to watch the trilogy back to back.

I didn’t get to see the film in 48 frames per second, but have heard mixed responses to that format. Apparently it is wonderful for the landscape shots, offering beautiful clarity, but that same clarity has a negative effect on costumes and make-up.

While The Hobbit: An Unexpected Journey has copped a bit of flak from some critics, and doesn’t reach the heights of the incredibly successful Lord of the Rings trilogy, it is not Star Wars Episode I: The Phantom Menace by any stretch of the imagination. It feels a little drawn out, but once the story gets going there is a lot of fun to be had.