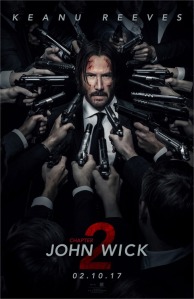 John Wick was a surprise hit. What seemed on paper to be a relatively routine revenge thriller for a star in real need of a career bump somehow became the most unlikely of critical hits, lauded for its strong sense of design and lively fight choreography. With David Leitch having taken his directorial talents to Atomic Blonde, original co-director and former Keanu Reeves stunt double Chad Stahelski takes the reins solo for John Wick: Chapter 2. As a sequel, it is appropriately titled. Without taking us off in any new directions, it gives us more of the same without feeling like it is simply rehashing.

In the world of assassins, John Wick (Keanu Reeves) is the boogeyman. To frighten each other, assassins tell stories of John Wick, and as one character points out, if anything these myths and tall tales have been toned down to make them believable. END_OF_DOCUMENT_TOKEN_TO_BE_REPLACED