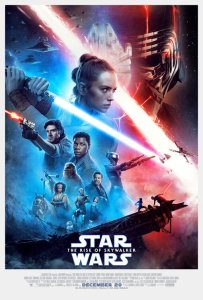 Twenty-nineteen was a big year for pop culture climaxes. In April, Avengers: Endgame drew Marvel’s 22 film ‘Infinity Saga,’ if not the the Marvel Cinematic Universe as a whole, to a close. May saw the culmination of Game of Thrones’ eight season run. Popular consensus suggests that one stuck the landing better than the other. Neither, however, carried quite the same level of pressure as Star Wars: The Rise of Skywalker, the ninth and, we are told, final film in the central series which we are apparently now calling ‘the Skywalker Saga.’ Since its debut in 1977, Star Wars has in many ways defined contemporary blockbuster filmmaking as both a narrative and a franchise. Unfortunately, while a perfectly adequate piece of blockbuster filmmaking, watching The Rise of Skywalker confirms what has been suggested by the previous two instalments: that this has been a trilogy without a clear, overarching plan. END_OF_DOCUMENT_TOKEN_TO_BE_REPLACED