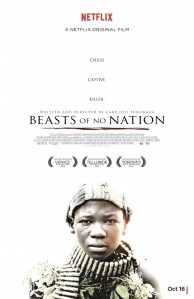 After great success with its original television content with shows like House of Cards and Orange is the New Black, streaming giant Netflix has made the move into film production with its first original feature, Cary Joji Fukunaga’s Beasts of No Nation. In adapting Nigerian-American author Uzodinma Iweala’s acclaimed novel about the life of a child soldier, Netflix has made a powerful statement with its first film, announcing itself as a company not afraid to tackle complex and confronting subject matter.

In an unspecified African nation, we meet a cheeky and imaginative young boy named Agu (Abraham Attah). While Agu lives a carefree existence, his country is caught up in a vicious, multi-factioned civil war. There is a constant stream of refugees passing through their rural village. Caught between the rebels and the army, the decision is soon made to evacuate the village. While the women and babies are shipped off to the capital for safety, the men stay to protect their village against looters. END_OF_DOCUMENT_TOKEN_TO_BE_REPLACED