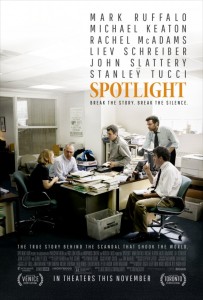 Revelations of child sexual abuse in the Catholic Church, and the institutional cover up which protected its perpetrators, have rocked communities all over the world. The effect has been particularly devastating in cities where the church and the wider community are almost inseparable. Tom McCarthy’s Spotlight takes its title from the small, four person investigative team at the Boston Globe who, in 2001, uncovered a scandal in the local archdiocese which started a snowball effect which would be felt around the globe and earned the newspaper a Pulitzer Prize.

The Boston Globe has a new editor, Marty Baron (Liev Schreiber). Baron has worked at the New York Times and the Miami Herald, so he has serious credibility. But he is Jewish, unmarried, and doesn’t even like baseball. In other words, he is not Boston. In his first meeting with the Globe staff he draws their attention to a small column buried deep in the paper about a local priest who has been convicted of child sex offences and decides that this will become the next target for the Spotlight team END_OF_DOCUMENT_TOKEN_TO_BE_REPLACED

See @littlewomenmovie. It might just be perfect.
Merry Christmas
Skyfall in Concert at @sydneyoperahouse. I’ve never done one of these before. Pretty cool.
A great day of screenings to round out three years with AFTRS class of 2019.
Thank you, @boredolives. #Shining #overlookhotel
My worlds colliding. #theboss #scorsese
Had an impromptu ‘bring your daughter to work day’ today. This little star is surely now the youngest co-lecturer in @aftrs history.
Guest appearance in the Masters today, prattling on about interwoven universe storytelling.
Watched Picnic at Hanging Rock for the first time in ages today. It’s a strange and wonderful film.