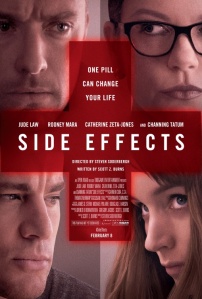 When I visited America a couple of years ago, I was struck by the advertising of prescription medications on TV. Viewers were encouraged to ask their doctor about the latest cholesterol medication or anti-depressant. It seemed symptomatic of a society with a disturbingly consumerist relationship with medication. It is precisely this mindset, particularly towards mood-altering medications, that Steven Soderbergh seeks to expose in Side Effects.

Dr. Jonathan Banks is a professionally ambitious psychiatrist who comes into contact with troubled Emily Taylor after it appears she has tried to take her own life. With a history of anxiety she is struggling to adjust after her husband returns from prison. When the usual suspects don’t seem to be doing the job, Banks turns to a new drug called Ablixa, whose advertisements encourage patients to “take back tomorrow.” But like all mood altering meds, it has a couple of side effects.

Both of their lives are soon rocked when Emily is arrested for murder, seemingly while under the influence of her medication. Dr. Banks is then caught between a rock and a hard place. If he chooses to defend Emily against the charges, blaming the drugs for her actions, the finger of blame then turns to him as the man who prescribed the medication. As his career starts unravelling before his eyes, he sets about investigating the events to work out exactly what happened.

While we are not encouraged to believe that Emily’s condition doesn’t warrant medication, Soderbergh uses other peripheral characters to mount his criticism of an overmedicated society which has become reliant on mood altering drugs. We see one woman calmly popping a beta blocker to help her get through a job interview, while others share their knowledge and familiarity with the effects of the various mood altering medications that Emily has been prescribed. While this social commentary ultimately makes way for a reasonably regulation thriller narrative it is interesting while it’s there.

Jude Law and Rooney Mara carry much of the load in this film and both put in strong performances. Law gives Dr. Banks a very composed and measured personality, but as the events unfold he deteriorates, growing more and more desperate. It is interesting to watch this character who makes his living from helping people keep it together fall apart. Mara, who burst onto the scene with her roles in The Social Network and Girl with the Dragon Tattoo, delivers arguably her best performance, opting for subtlety when it would have been easy to go over the top.

Soderbergh’s body of work demonstrates an impressive stylistic range, with drastically different films like Traffic, Erin Brokovich, the Oceans 11 films and sex, lies and videotape. In this case he adopts a very neat, efficient and largely unobtrusive visual style. As well as directing the film, he acted as cinematographer (under his regular pseudonym Peter Andrews) and editor (this time as Mary Ann Bernard).

Steven Soderbergh has suggested that this will be his final feature film – though it should be noted that his made-for-TV Liberace biopic Behind the Candelabra is set to receive a cinematic release in some markets. From here on in he plans to focus his energies on other artistic pursuits, primarily long-form television. If Side Effects does end up being his parting gift as a feature filmmaker – which I’m not entirely convinced of – it is not a bad note to leave on. While it won’t sit among the very best examples of his work, it is a good thriller with an interesting central premise.