While one could be forgiven for making certain assumptions about a movie about con artists strippers – after all, it does sound like the premise for a 1970s exploitation film – from the get go Lorene Scafaria’s energetic caper film Hustlers sets about defying any such expectations. Based on the true story first captured in Jessica Pressler’s New York Magazine feature, the tables are turned as the exploited become the exploiters in this interesting and thoroughly entertaining film.

Having recently started dancing at the strip club Moves, Destiny (Constance Wu) is not finding it to be as lucrative as she’d hoped. But when she is taken under the wing of queen bee Ramona (Jennifer Lopez), she quickly learns how to squeeze her cashed up, Wall Street clientele for everything they are worth. When the Global Financial Crisis hits, however, the rivers of gold dry up. Their clientele disappears and those who do remain are not nearly as extravagant as they used to be. So with desperate times calling for desperate measures, what starts out as a standard ‘fishing’ operation – going out into bars and luring potential clients back to the club – turns into something more devious as they set about drugging these men and fleecing their bank accounts.

Part gangster film, part caper film, part workplace drama, Hustlers feels like a lot of things. There’s a little bit of Scorsese. There’s a little bit of Soderbergh. One thing that Hustlers does not feel like, however, is a stripper movie. We have seen the world of strip clubs and pole dancing numerous times in movies before, but nearly always in male-focused crime dramas or comedies, entering the space with our characters, positioned as clients. What makes Hustlers stand out is that it is not only a film about women, it is so clearly a film by women. Writer-director Scafaria brings a distinctly female gaze to this place which has always been presented as the very manifestation of the male gaze. Our perspective is aligned with the dancers, not the clients. The club becomes a workplace, not a sexual fantasy land. It is the dancers who are empowered while, for much of the film, it is the clients who are being taken advantage of. Even the presentation of the dances is different. While cinematographer Todd Banhazl is male, he retains this female point of view. His camera does not leer. It does not ogle. Ramona’s first dance, when we first encounter her as a character, is an incredibly powerful moment because we are seeing it through the admiring eyes of Destiny rather than through those of the men sitting in the front row throwing dollar bills. While Hustlers willingly interrogates their criminal behaviour, it remains entirely nonjudgemental about working in the sex industry. 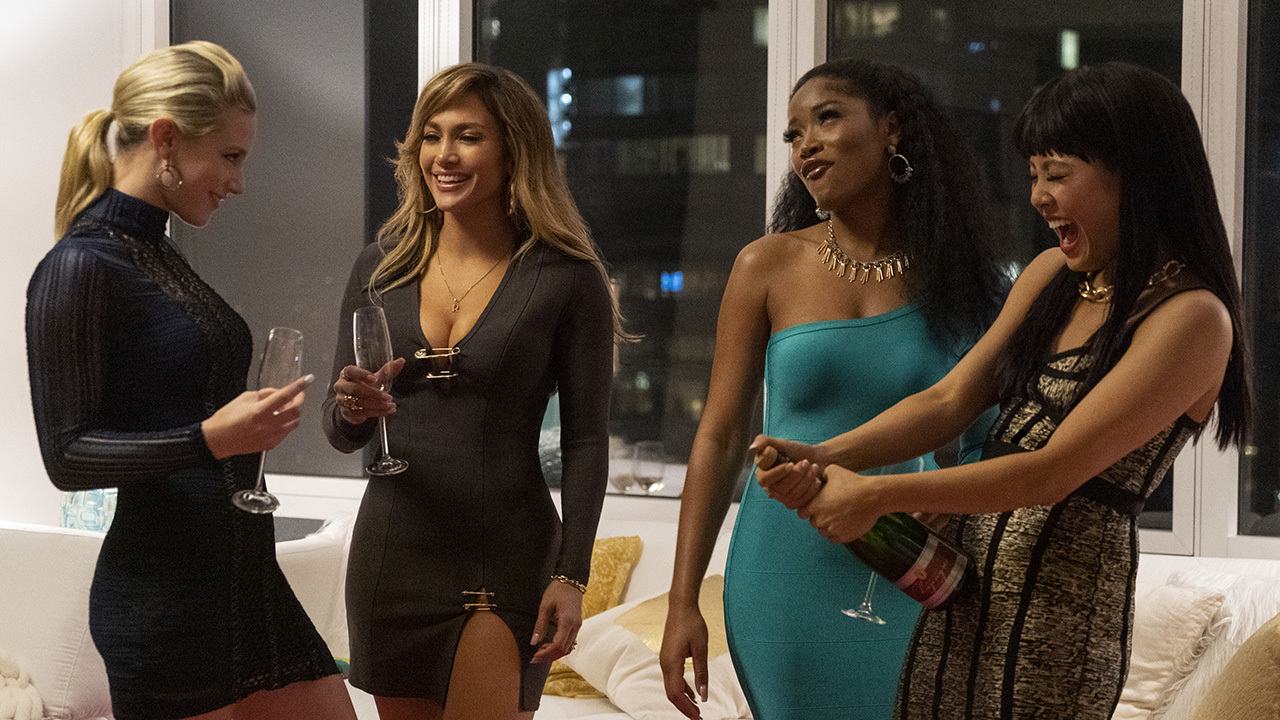 There is an interesting moral ambiguity to Hustlers. In Ramona’s mind, stealing from the Wall Street types who have profited from other people’s struggle and caused the financial crisis that has hit society makes them morally justified, Robin Hood-like figures. But as our protagonist and narrator, it is Destiny who is our guide to navigating that ambiguity. Her narration is delivered in the form of an interview with a journalist (Julia Stiles) working on the story seven years after the fact, meaning not only does it have the perspective of hindsight, but it is also her attempt to justify her actions to someone else. Through her telling of the story, we understand where they were coming from. With so many of society’s cards stacked agains them, these enterprising women were looking for any way the game could be rigged in their favour, and for much of it she is unapologetic. But as their eyes grew bigger and their racket expanded, we see Destiny’s ability to continue to believe Ramona’s narrative being challenged.

Having established herself on television, Constance Wu made a splash with her lead role in last year’s breakout hit, Crazy Rich Asians, and continues to show her big screen credentials here. Her layered performance across the two time periods succeeds in making us feel sympathy for Destiny without every making her an object of pity. As good as Wu is, though, there is no doubting that this is Jennifer Lopez’s movie. While Lopez has been one of the world’s biggest stars for two decades, we have never seen a performance from her like this before. J-Lo’s impactful entrance in the aforementioned dance scene, strong and sexy but not leering, perfectly encapsulates the film’s third wave feminist, power-through-embracing-sexuality mentality. Ramona is a powerhouse, with a charisma that ensures she draws eyes wherever she goes (a quality no doubt helped by Lopez being the clear A-lister in the cast). She is all business and strategy. She knows the world in which she operates. But she is also incredibly genuine in her care for her friends. This is a career defining performance.

In both form and substance, Hustlers is so much more than it might have been. It offers fantastic performances, a different perspective on a world too often rendered two dimensional on screen, and astute observations about the impact of the GFC on the working classes rather than just focusing on the perpetrators, all wrapped up in a really entertaining package, and could be a left field contender come awards season.

Have you seen Hustlers? Leave a comment and let us know what you thought.