Does great art transcend time and space or does it require context? Is its greatness dependent on the its ability to speak to a particular audience at a particular moment in history, and what part does the personality of its creator play? These are the questions director Danny Boyle and writers Richard Curtis and Jack Barth are wrestling with in Yesterday. Except they are not wrestling at all. Rather, Yesterday adamantly proposes that such is the inherent brilliance of the Beatles’ music that if their songs were to appear fully formed in a contemporary world in which the Fab Four had never existed, they would still become an instant sensation.

Jack Malik (Himesh Patel) is a struggling singer-songwriter who, despite the unwavering support of his adoring friend and manager Ellie (Lily James), is ready to throw in the towel after years of busking and playing to empty pubs. However, on the way home from what he declares to be his final gig, Jack is hit by a bus and knocked unconscious at precisely the moment that there is a mysterious worldwide blackout. He wakes the next day in hospital missing his front teeth, but soon discovers that they aren’t the only things missing. Somehow the whole world has forgotten the Beatles. There is no record that they ever existed. But Jack still remembers them, meaning this smalltime strummer now finds himself in exclusive possession of arguably the world’s greatest songbook, his ticket to music superstardom. He just needs to remember all the lyrics.

It is a fantastically quirky, high concept premise for a film, but with a hypothetical premise like this the question is always how far down the rabbit hole you are willing to go? Yesterday doesn’t seek to follow this idea all the way to its logical conclusion because it is not really about examining the extent to which the Beatles have shaped modern popular culture and contemporary Western society more broadly. It makes a little joke out of the idea that Oasis and ‘Wonderwall’ don’t exist in this Beatle-less reality, but it doesn’t challenge the notion that Coldplay or Ed Sheeran would have emerged in a music world that was never shaped by the Beatles. Instead, the film is more interested in exploring the peculiar ethical dilemma Jack finds himself faced with. What is the right thing to do here? Jack knows these aren’t his songs despite the fact they don’t exist anywhere other than in his head. His meteoric rise to stardom is accompanied by an incredible imposter syndrome and paranoia that he will be uncovered. If he has managed to remember the Beatles, does that mean that there could be other people out there who do as well? 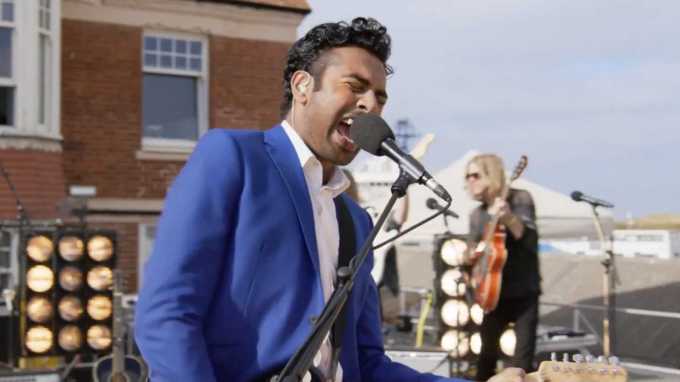 Director Danny Boyle is back in Slumdog Millionaire, crowd-pleasing mode and, as a result, Yesterday doesn’t take itself too seriously. For all its reverence towards the Beatles, it willingly pokes fun at the ways in which they don’t translate – a marketing person vetoing ‘The White Album’ because it doesn’t sound very diverse (though no one seems to have an issue with a guy in his thirties starting a song with “She was just seventeen. You know what I mean”). We learn throughout the film that the Beatles were but one of a random collection of things to have been erased from history, a source of humour sprinkled throughout as Jack is met with blank stares when referencing seemingly ordinary things. Ed Sheeren, playing himself, is a bit wooden at times but undoubtedly a good sport, willing to make himself the butt of more than a few jokes. Kate McKinnon is also funny, despite her cartoonish performance as a money-grabbing record executive feeling like it belongs in a different film to everyone else. Yet even in this fun mode, Boyle ensures that emotional moments land and that tension and suspense build, and he even manages to deliver a couple of genuinely surprising moments once you feel confident you know where the story is going.

Himesh Patel, a veteran of over 500 episodes of British soap EastEnders, is a bit of a find in his feature debut. In addition to capably handling the required singing, he provides the emotional grounding to this outrageous premise. However, the love story between he and Lilly James’s Ellie  is not the film’s strongest suit. This is not because we doubt the chemistry between Jack and Ellie, rather that we struggle to accept the premise that Ellie has been in Jack’s life this whole time and yet he has apparently never considered her as a romantic possibility until now. It is just a bit hard to believe.

With the inherent power of the Beatles’ music being central to the film, it is pivotal that they got the musical moments right. Composer Daniel Pemberton, who has previously worked with Danny Boyle on Steve Jobs, has created new arrangements of these incredibly well known songs that ensure Jack’s performances don’t come across as simple karaoke, providing the subtle differences you would expect given that, in the world of the story, they have been recreated from memory without any reference material (the film has some fun with Jack’s efforts to try and piece together the lyrics to ‘Eleanor Rigby’).

Coming on the heels of traditional music biopics like Bohemian Rhapsody and Rocketman, Yesterday is an appropriately outside-the-box tribute to the Beatles, celebrating them by imagining that they don’t exist. It’s not earth shaking, but a joyful toe-tapper which will leave you with a dozen songs rolling around your head for the next few weeks.

Have you seen Yesterday? Leave a comment and tell us what you thought.