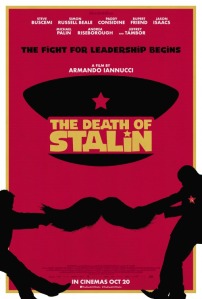 It has been said that comedy is tragedy plus time. With The Death of Stalin, Armando Iannucci, the creator of Veep and The Thick of It, really puts that idea to the test by bringing his brand of acerbic political satire to the darkness of Stalin’s Soviet Union.

In the years after the Great Terror, the Soviet citizenry and politicians alike live in a constant state of fear of their leader, Josef Stalin (Adrian McLoughlin). But on the evening of 28th February, 1953, the dictator suffers a stroke and collapses alone in his office. The guards outside the door hear him fall but are too terrified to risk interrupting. When his body is discovered the next morning the Council of Ministers convene, but the fear and paranoia remains so strong that none are willing to be the first to acknowledge he has died lest it be interpreted as wishful thinking, nor make any decisive plans lest it be seen as opportunism. But when the reality of the situation sinks in the jockeying for position begins. While Stalin’s deputy, Georgy Malenkov (Jeffrey Tambor) is installed in the role as leader of the Communist Party, he is little more than a bumbling patsy. The real movers are head of the secret police Lavrentiy Beria (Simon Russell Beale) and Party Secretary Nikita Khrushchev (Steve Buscemi). While a united front and the outward appearance of respect for the fallen dictator must be presented to the people through the funeral and public observances, factions start to form and the battle lines are drawn.

The Death of Stalin opens in a concert hall where pianist Maria Veniaminovna Yudina (Olga Kurylenko) and an orchestra are performing a concerto for live broadcast on the radio. As the performance comes to a close, the phone in the sound booth rings. It is Stalin himself, demanding a recording of the performance and informing them that some officers would be arriving shortly to collect it. The problem is the performance was not recorded. Rather than risk the wrath of the dictator, the sound technician Andreyev (Paddy Considine) must convince the exhausted musicians to play the piece again and pull people in off the streets to replace the audience who has already departed. Intercut with this scene we see Beria distributing the fresh lists of enemies of the state to his secret police along with callous instructions – “Kill her first, make sure he sees it.” We then watch them head out into the night and execute their orders. It is the farcical and the horrifying side by side, with both helping to illustrate the sense of fear and paranoia that pervaded under the reign of Stalin. Iannucci is able to draw absurd comedy out of the situation without ever losing sight of the horror. This wonderfully executed opening is the high point of the film, setting the tone that the rest of the film will endeavour to sustain, but never with quite the same brilliance.

Adapted from the French graphic novel by Fabien Nury and Theirry Robin, The Death of Stalin is Iannucci’s second feature film, after 2009’s In the Loop. As a political satirist, Iannucci has always drawn his comedy from the overlapping of power and incompetence and while The Death of Stalin, which was co-written by David Schneider and Ian Martin, sees him venturing into a period setting for the first time those same preoccupations remain. It is a classical farce as the different members of the Council of Ministers try and work out who stands with who. Their scheming and visions of power are contrasted by their hopeless inability to run a meeting let alone a nation. But again, we simultaneously find these sycophants terrifying in how little they seemingly believed in what Stalin was doing, willingly participating out of self-interest rather than conviction.

The Death of Stalin brings together an impressive cast of British and American character actors. While some, like Michael Palin, Steve Buscemi and Jeffrey Tambor, have strong comedy resumes and perform as expected, it is Simon Russell Beale as the Machiavellian Beria who is the the standout. Adding to the film’s sense of farce, none of the actors attempt a Russian accent. So despite a visual authenticity with period sets and costumes, the film is inhabited by a variety of British and American accents. Not only do the actors not attempt Russian accents, some actively take on alternatives. This is most strikingly employed by Jason Isaacs who gives his war hero Georgy Zhukov with a rowdy northern English accent which enhances the sense of machismo which sets him apart from this collection of scheming maneuverers.

The Death of Stalin takes many of the same dilemmas and political manoeuvrings that are at the heart of Veep and raises the stakes by making them literally questions of life and death. It makes a farce out of a dark situation without leavening or undermining that situation, with the result being a fascinating but thoroughly anti-commercial comedy. While it has moments of sheer brilliance, its success is entirely dependent on the viewer’s ability to reconcile the comedy and the horror, and it may ultimately be one of those comedies which is smarter than it is laugh out loud funny.

Have you seen The Death of Stalin? Leave a comment and let us know what you thought.