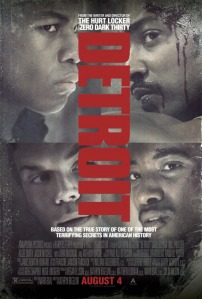 Fifty years on from the Detroit riots, and with the issue of police brutality to African Americans very much still alive, Academy Award winning director Kathryn Bigelow brings the horrific story of the Algiers Motel Incident, in which a dozen black men were tortured by police with three ending up dead, to the big screen. Bigelow, collaborating for the third time with screenwriter Mark Boal, has shown herself to have a special talent for examining human stories against the backdrop of violent conflict. We saw it in The Hurt Locker and Zero Dark Thirty and we see it again, albeit in a different way, in Detroit.

In the Fox Theatre Larry Reed (Algee Smith) and his group The Dramatics are waiting to go on stage for a gig they hope will be their big break only to have the show suddenly cancelled when police demands that everyone be sent home due the growing disquiet in the streets outside. Feeling sorry for himself, Larry and his friend Fred (Jacob Latimore) head to the Algiers Motel to stay off the streets until the trouble blows over. As the drinks flow, another resident, Carl (Jason Mitchell), produces a starters pistol and starts letting off shots from the window. Convinced there is a sniper in the building, the police descend on the Algiers. First on the scene are Detroit police officers Krauss (Will Poulter), Flynn (Ben O’Toole) and Demens (Jack Reynor). Earlier we witnessed Krauss shoot a looter in the back, an act for which he faces criminal charges, but he is still on the streets and is now in charge of a tense situation. A black security guard protecting a nearby grocery store, Dismukes (John Boyega), also inserts himself into the situation if for no other reason than to be a witness. Determined to find the identity of the sniper, the police turn to extreme measures to get the residents to talk. Caught in a living nightmare, for the Algiers residents the only aim is to make it through to the morning alive.

To get the most out effect out of the events at Algiers, Bigelow takes her time setting the scene. It is not until roughly 40 mins into the film that we get what would be considered the inciting incident for the narrative, Carl’s stunt with the starter’s pistol. That first 40 mins is all about context. Detroit opens with an animated prologue that paints a broad historical picture, charting a line from the ‘great migration’ which brought African Americans north in search of civil rights and factory jobs to the racial tensions of the 1960s. With the liberal use of handheld camera and reactive movements and reframing, cinematographer Barry Ackroyd presents the streets of Detroit like documentary footage from a war zone. With that platform set, Bigelow focuses us right in on a single location. The majority of the action that follows, Krauss’s brutal interrogation of the residents of the Algiers, takes place in a single hallway. Slowing down the narrative to what feels almost like real time puts you in the moment, resulting in an immersive sequence of unbearable, white-knuckle intensity. 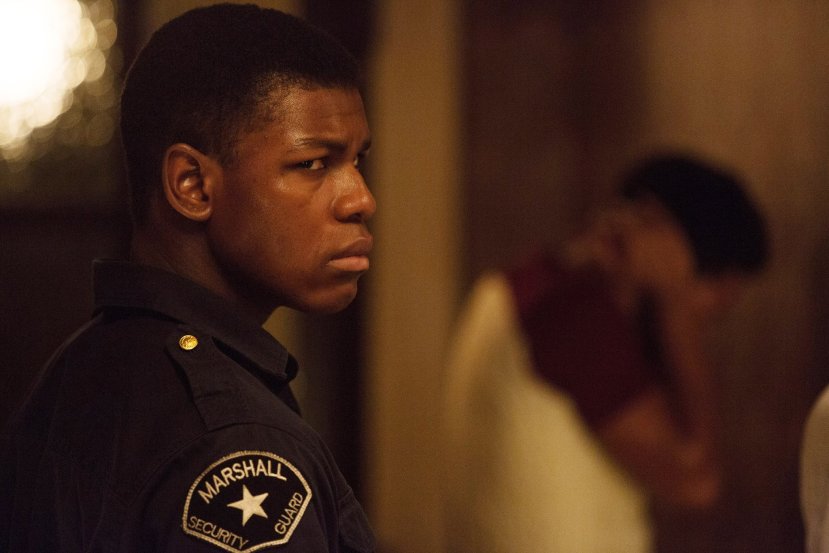 Rather than restricting us to the perspective of a single protagonist, we switch between the viewpoints of victims, aggressors and witnesses. As such, Detroit is an impressive ensemble piece with some good performances. The most eye catching is from baby-faced British actor Will Poulter as the villainous Krauss. Toeing the line of caricature, Krauss is incredibly menacing and hateful, while offering disturbing justification for his actions. The most interesting character, though, is John Boyega’s Dismukes. As a black man on the side of the law he finds himself in an uncomfortable position. He serves as a witness. He is present, watching, observing, with his lack of action leading to accusations of being an Uncle Tom. As viewers conditioned by Hollywood movies we are waiting for the moment that he steps forward and does something heroic, saving the day and standing in the path of injustice. But that is not how things work in real life. Dismukes knows he is powerless to stop anything happening, but he can observe it and, without saying it, we see that he hopes that his presence will be enough to keep people accountable, to some extent, for their actions.

Detroit’s portrait of personal and institutionalised racism is shocking, disconcerting, and entirely lacking in catharsis. A provocative film, it will bring you to anger, but then give you nothing to do with that anger. Obviously, Detroit is not intended to be an uplifting people pleaser in the vein of Hidden Figures, a film about overcoming, about triumph in the face of adversity, and it doesn’t need to be. However, the lack of revelation, of learning anything new from enduring this hard and affecting story, is problematic. It has been noted that Detroit is a very racially charged film to have been made by a white filmmaker. Increasingly we are asking questions about who can appropriately and authentically tell which stories. Those questions are not always so simple but in this case one could suggest that perhaps Bigelow and Boal’s lack of lived, personal insights into racism has contributed to the film feeling as though it is lacking a clear and interesting statement.

Given the nature of the subject matter, it is impossible to watch Detroit without doing so through the lens of the #blacklivesmatter movement. Where films like 12 Years a Slave and Hidden Figures offer indictments of the past, horrifying us with the notion that the world was ever like that, the true horror of Detroit is the knowledge that what we are watching is not consigned to history.

Have you seen Detroit? Leave a comment and let us know what you thought.