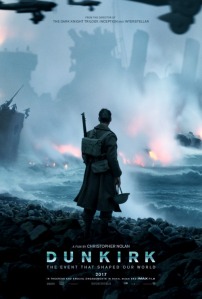 In May of 1940, the British Expeditionary Force, along with the French army, had been driven back to the Northern coast of France by the Nazis. 400,000 British troops were trapped on the beach at Dunkirk, sitting ducks to aerial attacks. While only 26 miles from home, so close you can practically see it, the shallow waters made it impossible for large vessels to get in and collect them. So the British Navy implemented ‘Operation Dynamo,’ requisitioning all available small civilian vessels – fishing boats, yachts and tugs – to cross the channel and retrieve them. The ‘Miracle at Dunkirk’ is a treasured piece of British history. When their boys couldn’t get home, home came to get their boys. Christopher Nolan’s latest film, Dunkirk, takes this tale and transforms it into immersive cinematic spectacle in a way that only he can.

Dunkirk brings us the story from three perspectives: the mole (as in a pier), the sea and the air. We follow Tommy (Fionn Whitehead) as he navigates the chaos on the beach. As the thousands sit and wait under the watchful eye of Commander Bolton (Kenneth Branagh) who is overseeing the evacuation, Tommy, like many others, is trying anything in order to get themselves onto a boat. On the sea we follow Mr Dawson (Mark Rylance), an older man who determines that if the navy require his boat to get troops then he shall captain it himself. In the air we are with RAF pilot Farrier (Tom Hardy), in a small squadron of planes charged with providing cover for the makeshift flotilla.

Dunkirk is a very immediate film. The battle which forced the troops back is over before we begin. We are not overburdened with context. How they got there is not important. This film is about the now, the scenario they find themselves in, and Nolan’s goal is to put us there with them. Dunkirk is an immersive experience, told with a very controlled point of view. We never stray to the enemy perspective, so like the characters we have no knowledge of what is coming. Nor do we see High Command, or the political machinations behind the scenes. Nolan keeps us in the moment, in the present. Hans Zimmer’s score, which incorporates the ticking of a watch, relentlessly ratchets up the tension, while the sound design literally shakes the theatre with each explosion. Hoyte van Hoyteman’s IMAX cinematography makes us feel both the agoraphobia of being on that beach and the confinement of being in the hull of a ship.

The thousands wait at the mole

While possessing that typically Nolan-esque sense of scale, this focus on immersing you within the story means you rarely step out of the immediate and take in the whole. As a visceral, immersive war film that is not really an issue. As a telling of the story of the ‘Miracle at Dunkirk,’ it arguably might be. There is only really one moment when we pull out into an extreme wide shot to see the makeshift flotilla of hundreds of small craft heading across the Channel, which is the iconic, heart-stirring image of that story. While the events on Mr. Dawson’s ship are supposed to be representative, we rarely get an impression of the collective effort. That said, what makes Dunkirk stand out as a war film is that it is almost entirely devoid of melodrama (until the final moments when it can’t quite help itself). We hear nothing of home and families. Characters rarely have a backstory, almost as thought they have been intentionally under-drawn. We are not given reams of personal information in order to raise the narrative stakes. The stakes are what they are. They are people in trouble. We want them to get out.

As a screen storyteller, Christopher Nolan revels in the machinations of narrative. Memento told its story in reverse chronological order so that we, like the protagonist who suffered from an inability to create new memories, never knew what happened immediately before the moment we were watching. The complex narrative of Inception featured dreams within dreams within dreams, cutting back and forth between action on those different ontological levels. Dunkirk contains similar experimentation with narrative delivery. The three narrative threads – the mole, the sea and the air – are interwoven as though they are occurring simultaneously but in fact Nolan is presenting three distinct temporalities. The events on the beach take place over the course of a week, the events on the sea over a day, and the events in the air over an hour. The timelines converge as the film progresses, but it means that events we see from one perspective early in the film, we see from a different perspective later on. It is a structure which takes some time to wrap your head around, and while that ability to re-experience events from different perspectives is interesting and at times rewarding, it arguably creates more confusion than it is worth and is not nearly as intellectually satisfying as the experiments of Memento and Inception.

While the performances across the board are solid – from the once again masked and accented Hardy in the sky, to the humble gravitas of Rylance – the three storyline structure means that Dunkirk is a film without an obvious protagonist, which is fitting because at the end of the day it is Christopher Nolan as the writer-director who is the star of this show. At a relatively tight 106 minutes, he has crafted a largely atypical war film which manages to feel simultaneously epic and personal in focus. This is not the first cinematic telling of the Dunkirk tale, and likely won’t be the last, but it may well prove to be the definitive.

Have you seen Dunkirk? Leave a comment and let us know what you thought.