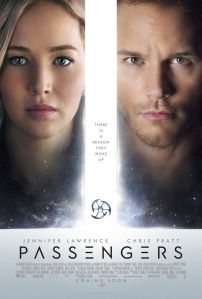 Jon Spaiht’s screenplay Passengers, a science fiction romance about two people alone on a long space journey, had been around the traps for a decade having appeared on the Black List (an industry survey of the top unproduced screenplays) way back in 2007. But once they added two of the hottest stars on the planet in Jennifer Lawrence and Chris Pratt, and an Oscar nominated director in Morten Tyldum, coming off his success with The Imitation Game, it wasn’t going to stay unproduced for much longer.

The Starship Avalon is 30 years into its 120 year journey transporting 5,000 hibernating migrants to the colony world of Homestead II when a technical glitch causes passenger Jim Preston (Chris Pratt) to wake way too early. With all the other passengers and crew asleep, and no way of putting himself back into hibernation, Jim is faced with the prospect of spending the rest of his life on this intergalactic cruise ship with only Arthur the android bartender (Michael Sheen) as company.

While Chris Pratt being Chris Pratt is always enjoyable to watch, the scenes of Jim’s solitary existence on the Avalon, as the weeks become months, does make you appreciate how well written The Martian was. As the isolation starts to get to him, Jim becomes increasingly obsessed with one of the sleeping passengers, Aurora Lane (Jennifer Lawrence). A writer, Aurora has set off on a return journey with the aim of being the first person on Earth to document life in the colonies. In his efforts to work out how to reactivate his hibernation pod he works out how to wake someone else. So Jim is torn. Should he wake Aurora up? Is his loneliness so severe that he could damn someone else to his same fate just to have some company? He knows it is wrong and wrestles with the idea, but ultimately he succumbs. The drowning man will always try and drag someone down with them. In a moment of desperate weakness he wakes her up, and as the two become friends, and then lovers, he must hide the terrible secret of what he has done.

It is a bold decision from screenwriter Spaihts, choosing to let us be in on Jim’s secret from the start rather than saving it for a reveal later in the film. It means we know their relationship is a time bomb. We feel pity on Aurora and it provides the viewer with an all too rare invitation to not like a Chris Pratt character. While Jim is sufficiently loveable and practically perfect in everything else he does, this act is such an enormous black mark it is difficult to look past it.

There is an extent to which Passengers feels a bit like Titanic in space. It is a love story, albeit one built on a horrible deception, taking place on a luxury cruise liner complete with bars, fine restaurants and entertainment. Aurora is a gold class passenger, from a privileged background, while James is only economy class, an engineer whose ticket price was subsidised because he has a skill set desirable for the new colony. Like Titanic, in its final act Passengers becomes a disaster movie. Jim starts to notice little glitches and malfunctions which make it apparent that something is not right with the ship. They discover that with the errors compounding the Avalon is quickly heading towards a critical systems failure and it is up to them to fix the problem and save the 5,000 hibernating souls on board.

These big spectacle scenes, lacking in a really visceral sense of excitement, are seemingly not Tyldum’s forte as a director, though he does produce one fantastically tense sequence in which Aurora is caught in the swimming pool when the ship’s artificial gravity malfunctions. Regardless, this catastrophic third act turn is ultimately just a distraction from the things we are actually interested in. The interest in the film comes from its series of interrelated moral dilemmas: Should he wake her up? Should he tell her that he did? How should she respond? Should she forgive the unforgivable to save herself from a lifetime of loneliness? When this dramatic two-hander becomes an action movie it distracts from these dilemmas and as such they are never adequately resolved. It is as though the writer had painted himself into a moral corner and couldn’t work out an acceptable way out.

Narrative issues aside, Passengers looks fantastic. The whole film has a real sense of opulence. From the twisting external design of the Avalon to the interiors which combine the sleek sterility of futuristic space travel with the lavish luxury of a commercial cruise ship, Guy Hendrix Dyas’ production design, for which he has been nominated for an Oscar, is wonderful. Jany Temime’s costumes are also beautiful, with Lawrence in particular serving as a bit of a clothes horse.

As good science fiction does, Passengers poses some really interesting questions: What would motivate someone to pack up their life, leaving behind family and friends to move to the other side of the universe? Would you rob someone of their future to save yourself from a life of loneliness? Is simple proximity enough to make two people fall in love? These are potentially fascinating areas of exploration, but unfortunately Tyldum’s film, which is too willing to coast on the charm and charisma of its stars, doesn’t make the most of them. You can’t help but feel there is a better version of this movie to be made.

Have you seen Passengers? Leave a comment and let us know what you thought?