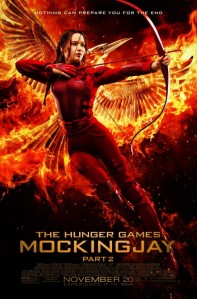 An important chapter in the career of one of Hollywood’s brightest young stars comes to a close as Jennifer Lawrence picks up the bow and arrows for the last time in The Hunger Games: Mockingjay – Part 2, the final adaptation from Suzanne Collins wildly popular young adult series.

With Panem’s districts united in revolution under President Coin (Julianne Moore’s), the fight to overthrow President Snow (Donald Sutherland) moves to the Capitol. Snow has put the game makers to work setting booby traps throughout the streets with the aim of making sport of the rebels deaths to galvanise the citizens of the Capitol. Feeling that Katniss (Jennifer Lawrence) has largely served her purpose as mascot of the revolution, Coin encourages her to take a back seat. But Katniss is determined to join the fight, motivated by revenge for the torture and brainwashing of Peeta (Josh Hutcherson). She, along with some other former games victors and recognisable faces – Finnick (Sam Claflin), Gale (Liam Hemsworth), Boggs (Mahershala Ali), Cressida (Natalie Dormer) – is put into an all-star non-combat unit whose job is to hang a couple of miles behind the frontline, exploring abandoned streets of the Capitol in (relative) safety and shooting propaganda videos. But as usual, Katniss has her own plans: get to the palace and kill President Snow.

Continuing the direction of Part 1, Mockingjay Part 2 is a war movie and from the get go asks questions of the morality of war. The rules of engagement are eroding before Katniss’ eyes. Who are the good guys? Are there any good guys? “This is war. Sometimes killing isn’t personal,” Gale tells her. But by this point Katniss has seen and done too much killing to believe that. As the Mockingjay, Katniss is a propaganda pawn, a prisoner of Coin’s movement. Katniss and President Coin have never been comfortable allies. They are bonded by a mutual enemy rather than a mutual goal. Katniss is useful to Coin as a symbol, but can’t be controlled which makes her a problem. While just alluded to in Part 1, Coin’s Machiavellian nature starts to show in this final chapter. Having promised free elections after the overthrow of Snow, Katniss’ popularity with the people starts to slide from being an important tool for Coin to a pending threat.

The Hunger Games franchise stands out from the myriad of ‘teen dystopia’ narratives we have been bombarded with over the last few years because of its intelligence and savvy commentary. This final two-parter focuses on the media manipulation of combat footage. It has serious subject matter which it treats seriously and tonally, the film is quite dark. While this franchise is about a society that has made a sport of killing, death is always something that is felt. It leaves scars, be they from losing someone or from taking the life of someone. For a piece of popular fiction Mockingjay Part 2 is also a very brave film, not shying away from the harsh realities of its story. There is a choice made and an action taken towards the climax which is more harrowing than almost anything that can be found in most adult oriented war movies.

As Katniss Everdeen, this reluctant Joan of Arc figure, Jennifer Lawrence continues to be the emotional heart of this franchise. In the three years since the first Hunger Games film was released, Lawrence has gone from being a young actress of incredible promise to an Academy Award winner and one of the biggest stars on the planet and she brings such depth to the character. Lawrence gives Katniss a real vulnerability despite her strength and defiant attitude. She is traumatised, and has been since her first games. While a pawn in Coin’s power play, Katniss is the conscience of the movement and she is exhausted by that burden.

Across its four instalments this franchise has developed an impressive supporting cast. Many of the bigger names take a back seat in this final instalment, with the likes of Stanley Tucci, Elizabeth Banks, Jenna Malone and Jeffrey Wright receiving only token screen time, while others like Liam Hemsworth, Mahershala Ali and Elden Henson are given greater opportunity to shine than in previous instalments. The true standout though is Donald Sutherland who is deliciously menacing as the moustache twirling villain, Snow.

While we say goodbye to some beloved characters here, there is one goodbye that is sadder than the rest. Mockingjay Part 2 marks the final screen appearance of Philip Seymour Hoffman. Hoffman passed away part way through shooting, and it is unclear how much manipulation and rewriting was required to complete the film. Knowledge of his passing does make his character’s absence from the film’s finale noticeable, where it falls to Woody Harrelson’s Haymitch to read a letter from him. While his character does not have as much to do in this film as in earlier instalments, what he does with his little time – a wry smile, a telling glance – is so effective and a reminder of the phenomenal talent that has been lost.

Like Lord of the Rings: Return of the King before it, Mockingjay Part 2 struggles to settle on a final image, instead offering a succession of endings. After four films and a combined nine hours of screen time it is obviously difficult to find a scene that effectively concludes the journey the character and audience have been on and unfortunately the ending chosen here is overly sappy and feels unnecessarily tacked on to provide a ray of sunshine in what is otherwise quite a dark affair.

So did Mockingjay warrant two films rather than one? Probably not. Mockingjay Part 1 underwhelmed at the box office, with audiences clearly tiring of being asked to pay twice to see one story. Part 2 is a satisfying closing instalment and a good movie, but arguably not as good as it could have been. While in theory putting the entirety of the first act into Mockingjay Part 1 should have unburdened the second film, it still takes its time in getting moving and even when it does it doesn’t quite reach the thrill of the first two. One film, even a long one, would have helped to tighten up the pacing of this story, which is very slow at times.

Have you seen The Hunger Games: Mockingjay – Part 2? Leave a comment and let us know what you thought.