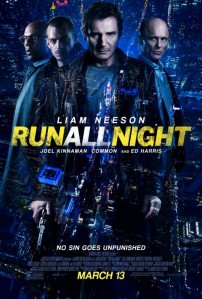 In 2008, at the age of 56, Oscar nominated actor Liam Neeson’s career took a peculiar turn. Pierre Morel’s Taken introduced the world to Neeson’s “very particular set of skills,” and the success of that movie, its sequels and imitations have turned Neeson into arguably Hollywood’s most bankable action star. That all of this happened simultaneous to The Expendables franchise having tongue-in-cheek fun by bringing back a group of action heroes from decades past, most of whom happen to be roughly the same vintage as Neeson, only adds to the peculiarity. Juame Collet-Serra’s Run All Night is the latest film to take advantage of Neeson’s new tough guy persona.

Jimmy Conlon (Neeson) is a mess. Once known as Jimmy the Gravedigger, he used to be a feared hitman for mob boss Shawn Maguire (Ed Harris). Fifteen years down the track he is an alcoholic, estranged from his only son and gets by on charity from Shawn. One night, Jimmy’s son Michael (Joel Kinnaman) is in the wrong place at the wrong time and witnesses Shawn’s son, Danny (Boyd Holbrook), murder an Albanian heroin dealer. When Danny arrives at Michael’s house to dispose of the witness he is gunned down by Jimmy. From that moment both Jimmy and Shawn are resigned to what must happen. Shawn must have his revenge and direct the full might of his organisation at killing Michael, and Jimmy must stand against his lifelong friend and do whatever he can to protect his son.

Run All Night is the third collaboration between Liam Neeson and director Juame Collet-Serra, after Unknown and Non-Stop – those two Taken films which aren’t actually Taken films. Collet-Serra strategically plays Neeson against type. Traditionally Neeson brings a certain gravitas, even nobility, to his characters, but here he plays a drunk and a loser. Conlon lives with the consequences of past actions. He explains his son, “Just because I’m not behind bars doesn’t mean I’m not paying for what I did.” He sees a last chance for redemption in protecting his son. This protection is not just physical, but spiritual.

In this regard Run All Night effectively remakes Road to Perdition, Sam Mendes’ graphic novel adaptation from 2002, as an action thriller. Jimmy and Shawn have chosen their paths. “Wherever we are going, when we cross that line we are crossing it together,” is a sentiment both share with the other at some point in the film. But while Jimmy’s fate is sealed, his Michael’s is not. Jimmy is determined that the son should not have to pay for the sins of the father, and nor should he repeat those sins. In trying to stave off the thugs and hitmen on their tail, Jimmy is also determined that Michael will never have to live with the guilt that comes with taking a life. It is him and him only who will get his hands dirty and do what is required to get them through this experience. At times there is a lack of subtlety in getting this point across, but it none the less adds some emotional depth to this high intensity thriller.

As the title would suggest, Run All Night has a kinetic energy to it. A sequence in a burning apartment block where Jimmy and Michael try and evade a police search crew and a hitman, and a car chase through the streets of New York are both highlights. Yet despite the thrills and spills, arguably the most startling part of the film is a cameo from Nick Nolte – what on earth has happened to the one time People Magazine ‘Sexiest Man Alive.’ There is also an appearance from Common, fresh off the success of Selma, playing a two-dimensional hitman who is so indestructible and without emotion you could be forgiven for thinking he was the Terminator.

As strange as it seems that Neeson has reinvented himself as an action hero in his fifties and sixties, the fact remains that he is actually quite good at it, playing that Clint Eastwood-Mel Gibson style tough guy very effectively. He is aware that his time as an action hero is limited and has publically stated that he only sees himself making this kind of movie for one or two more years. So fans of Neeson in tough guy mode should make the most of it while it lasts and you can do a lot worse than Run All Night.

Have you seen Run All Night? Leave a comment and let us know what you thought?