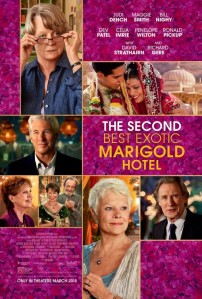 With its all-star cast of ageing British thespians, The Best Exotic Marigold Hotel was one of the surprise hits of 2012. It grossed $135 million worldwide – an astonishing figure for a film more interested in seventy-year-olds than seventeen-year-olds – by tapping the potential of the oft-ignored ‘grey-dollar.’ With none of its ensemble having ‘checked out’ how could 20th Century Fox resist a return visit with the riskily titled The Second Best Exotic Marigold Hotel.

Sonny Kapoor’s idea was to outsource retirement to India, and eight months on from the events of the first film business is booming. The young entrepreneur has expansion on his mind and US retirement company, Everygreen has agreed to send an assessor to Jaipur to determine whether the Marigold Hotel is a worthwhile investment. When Guy, an American novelist claiming to be on a research trip, arrives shortly after, Sonny is adamant that he must be the assessor and sets about doing everything he can to impress him, though Guy seems to be more interested in Sonny’s mother than his hotel. In his single-mindedness, Sonny is neglecting the preparations for his upcoming wedding to the frustration of his fiancée Sunaina. Meanwhile, the foundation residents of the Marigold have successfully found a new lease on life in India, finding jobs, friends and lovers. Mrs Donnelly co-manages the hotel, Evelyn buys fabrics at the local market, Douglas is a tour guide, and Norman and Madge run the bar at the ex-pats club. The tentative romance between Evelyn and Douglas still requires a push, but Norman is giving monogamy his best go with Carol, and Madge is entertaining multiple wealthy suitors. There are subplots everywhere.

While the first film was based on Deborah Moggach’s novel, she only wrote one so this sequel is the brainchild of the returning writer-director team, Ol Parker and John Madden. Parker and Madden manage to successfully recapture the formula which made the first instalment work. It is the colour, noise and vibrancy of India that gives these films their life, and this one comes complete with an Indian wedding. But where the comedy in the first film was heavily dependent on culture-clash jokes, the second time around the juxtaposition of the ageing middle-class British characters with their Indian surroundings is not as heightened as they have made themselves at home.

With its combination of gentle humour and the perspective and wisdom of age, The Second Best Exotic Marigold Hotel is undemanding, sit-back-and-relax viewing. The multiple subplots are largely very predictable, but none the less enjoyable. If a critique could be made it would be that this highly sentimental film lacks a bit of the light and shade that Tom Wilkinson’s mournful story brought to the first instalment.

In a cast of familiar faces it is Maggie Smith who stars. The sequel transfers narrator duties from Judi Dench’s Evelyn to Smith’s Mrs Donnelly and as such the film feels more like her story. We start and finish with her and Mrs Donnelly is as blunt and her tongue as sharp as ever, even if she has softened a bit with her obvious affection for Sonny and the hotel.

Ultimately, The Second Best Exotic Marigold is not a film intended to change anyone’s minds. Light-hearted and fun, it is more of the same, a successful replication, and if you enjoyed the first film you are sure to get a kick out of the second.

Have you seen The Second Best Exotic Marigold Hotel? Leave a comment and let us know what you thought.