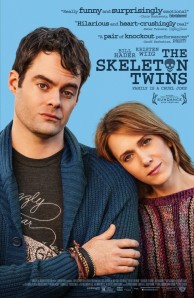 They say you should never judge a book by its cover. It is equally true that you should never judge a film by its cast. With Saturday Night Live alumni Bill Hader and Kristen Wiig headlining, and Luke Wilson and Modern Family’s Ty Burrell in key supporting roles, one would assume The Skeleton Twins to be a flat out laugh riot. But Craig Johnson’s film has deeper, darker issues to explore.

The film opens with the concurrent unsuccessful suicide attempts of a twin brother and sister, Milo and Maggie. Milo is a gay, unemployed actor. Maggie is a married, discontented dental hygienist. His attempt fails; hers is interrupted by the news of his. Despite being thick as thieves as kids, they haven’t spoken each other in ten years. Rushing across the country to be by Milo’s side, Maggie insists that he move in with her and her husband Lance until he has recovered. Living under the same roof, these two troubled people reconnect, rediscovering the bond that they share, confronting old wounds and helping each other address their issues.

Obviously, The Skeleton Twins is not the light giggle-fest you might have expected. The movie is best described as a ‘dramedy.’ It explores some serious issues – depression, self-worth, the effects of suicide – in a serious way, but with the cast it possesses it can’t help but allow some humour to sneak in.

Covering some familiar thematic ground, Craig Johnson and Mark Heyman’s screenplay feels a bit paint-by-numbers indie. Over the last two decades of American independent film we have seen dysfunctional, estranged families and adults trying to deal with the scars inflicted by their parents explored ad nauseam. While The Skeleton Twins is an earnest film, it doesn’t offer us anything drastically different. While Johnson and Heyman succeed in creating strong, complex and largely believable characters, the narrative itself occasionally opts for the easy and conventional route.

The strength of the movie comes from the revelatory central performances from Hader and Wiig. Both are clearly heavily invested in the project and show impressive dramatic range which may surprise some given their improvisational comedy backgrounds. We’ve seen glimpses of what Wiig is capable of in dramatic moments in Bridesmaids and The Secret Life of Walter Mitty, but Hader’s film career has to this point been made up of supporting roles in broad comedies. He joked about himself in the James Franco roast, “Bill’s ok in the movies if you need a best friend’s best friend to ask an exposition question.” With one of Hader’s most beloved SNL characters being the ultra-camp Stefon, it is impressive to see that Hader’s Milo doesn’t fall back on lazy gay stereotyping but is a well-crafted and complex character.

Having worked together for so many years on SNL, there is a chemistry between the two which helps make them very believable as siblings. Milo and Maggie have a shared sense of humour and shorthand communication which is obviously natural to Hader and Wiig. While their performances in the film’s more dramatic moments which is what surprises, their comedic abilities are still pivotal. Their humour shines through in moments that break through the film’s bleakness but also serve to reinforce it. It emphasises the fact that these are two fun individuals who have been squashed by life.

The Skeleton Twins is moving, at times quite confronting, and at others very funny and reminds us of the special bond that siblings share.

Have you seen The Skeleton Twins? Leave a comment and let us know what you thought.