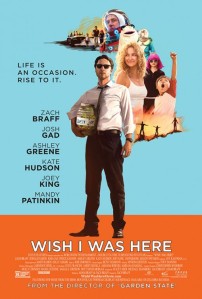 Ten years after his first film as a writer-director, the incredibly indie dramedy Garden State, former Scrubs star Zach Braff returns to cover similar territory in his second film, co-written with his brother Adam, Wish I Was Here.

Once again, Braff plays an aspiring actor. Aiden Bloom is 35, married with two children, and still struggling without success to achieve his acting dream. His wife Sarah works a horrible job to put food on the table and his father Gabe, with whom Gabe enjoys a uneasy relationship, pays for the children’s private Jewish school tuition. But when Gabe gets cancer and needs his money to pay for an experimental treatment, they have to pull the kids out of private school and the decision is made that Aiden will home school them.

Wish I Was Here sits comfortably as a companion piece to Garden State. Both tell stories of a young man – or in this case a man who is not as young as he used to be – who is drifting through life, ungrounded and uncertain. Both films share a similar existential angst, and awareness and fear of mortality.

Funding the film through Kickstarter – a controversial move which caused much debate about the appropriateness of well-paid stars using the crowd-sourcing website to fund their productions – meant that Braff enjoyed the freedom to make the film that he wanted. The result is obviously a very personal film, but at times it errs into self-indulgence. There are scenes in the film which only seem to be there out of a misguided belief that they are quite profound; two separate scenes in which a character recites poetry, and a repeated anecdote about Aiden and his brother’s childhood fantasies about being heroes who had to save the world. You get the feeling that the movie might have benefited from Braff having a bit more accountability as writer-director-star.

The film’s most jarring issue though is its protagonist. It is unclear how we are supposed to respond to Aiden, but he doesn’t come across as overly sympathetic. While his issues with his father play as authentic, the other problems he faces are very much of the “first-world” variety. They can’t afford to send their kids to a prestigious private school because Aiden won’t put his acting dream to one side to help provide for his family. Sarah even asks him at one point, “When did this relationship become solely about supporting your dream?” At best he comes across as oblivious, at worst, selfish.

One cannot doubt the earnest sincerity of the film, and despite its moments of pretention and its woe-is-me protagonist, there are some interesting thematic explorations in the movie. In his moment of personal crisis as he confronts his father’s mortality, we watch as Aiden struggles with what it means to be a man, to be a husband and to be a father.

Wish I Was Here is an uneven film, but there are enough laughs and touching moments to get it through.

Have you seen Wish I Was Here? Leave a comment and let us know what you thought.