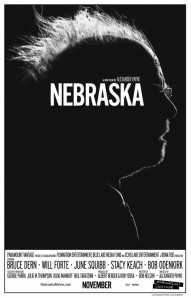 The road movie has always been a form that resonates with America, perhaps because it is such a large country, and one of its most interesting voices of late has been independent filmmaker Alexander Payne. Starting with a widower journeying to his daughter’s wedding in About Schmidt, and then a pair of middle aged men on a tour of the Californian wine country in Sideways, Payne likes to venture out on the road with unabashedly ordinary characters. He is at it again with a father and son in Nebraska.

After receiving an unsolicited piece of junk mail, ageing alcoholic Woody Grant is convinced that he has won one million dollars in a sweepstakes and needs to get to Lincoln, Nebraska – over 800 miles from his home in Billings, Montana – to collect his winnings. While his wife, Kate, and adult sons, David and Ross, are all too aware that this is a scam, there is no convincing Woody, and eventually David decides that the only way to put an end to it is if he takes Woody to Lincoln himself. On their way they stop off in Woody’s hometown of Hawthorne where the news that he has struck it rich spreads like wildfire, bringing all manner of friend and relative out of the woodwork to stake their claim for their piece of Woody’s expected winnings.

With its Middle American locations shot in beautiful widescreen black-and-white by Phedon Papamichael, Nebraska moves at a slow, almost melancholy pace. Road movies don’t need to be defined by momentum, and this one feels no compulsion to be. We know from the very beginning that the thing they are journeying towards, Woody’s million dollars, will not be there in the end, so the film is free to meander. Instead, as the old cliché goes, the journey becomes more important than the destination. At its heart, Nebraska is the story of a father and his son, or rather of a son and his father. For despite it being Woody’s image that appears on the poster, this is David’s story. It is David through whose subjectivity we encounter this tale. Woody is not a talkative or relational man, and it becomes apparent that for the entirety of his sons lives he never has been. Woody has always been removed from his sons. For Ross, this is the cause of much anger and resentment, but for David it is just the source of disappointment. This journey provides David with the opportunity to spend some time with his father, and through the stories he hears from the people of Hawthorne he comes to gain some understanding of this man who for his whole life has been a mystery.

The veteran character actor Bruce Dern has stumbled upon the role of his career at the age of 77. Woody is headstrong but vague. Is that vagueness a result of his years of alcohol abuse, or is he retreating into his own mind and memories? He is a character who, aware that he is in his twilight years, is determined leave his mark on the world. There is a lack of contentment in him and it is in this regard that Dern really brings something to the character that a more celebrated name couldn’t have. While it is Dern who is deservedly getting all the plaudits, Will Forte is also brilliant. The casting of Forte as David, the more subtle of the two leads, was a brave move that paid off. As a Saturday Night Live alumnus, Forte is best known as a comedic performer and a particularly unsubtle one at that, but he brings a real humanity to David and the perfect amount of uncomfortableness to his interactions. Outside of the two leads, it is June Squibb, as Woody’s fed-up, eye-rolling wife Kate who makes the biggest impact. Payne had previously used Squibb as the wife of Jack Nicholson’s character in About Schmidt, but in that film she died early on. Here she makes it through to the end and the film benefits greatly from her presence. It is Squibb, rather than the more obvious Forte or Odenkirk, who provides the films comic relief. In particular, the matter-of-fact accounts she shares with David about all the men from the old town who had tried to get into her pants are very funny.

A film reminiscent of small town films like The Last Picture Show, Nebraska blends humour and humanity with the result being a heartfelt, poignant and even uplifting film.