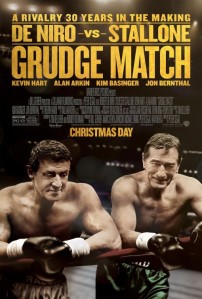 Hollywood has a history of mashing together popular franchises in the search of blockbuster success. We’ve had AVP: Alien vs. Predator and Freddy vs. Jason. Back in the 1940s you had Abbott and Costello Meet Frankenstein. The same mindset is at play in Peter Segal’s Grudge Match, which may as well have been called ‘Rocky vs. Raging Bull.’ Of course, technically it is not a mash up as it presents new and original characters. But in casting Sylvester Stallone and Robert De Niro in the leads, the filmmakers have inherited the audience’s associations with the legendary pugilists they have previously portrayed. It’s an odd pairing because despite both being about boxing, the two films couldn’t be more different. Rocky is an uplifting sports movie about a likeable underdog who finally gets his shot. Raging Bull is an art-house film about a damaged man whose anger and violence destroys his life. There is a reason there are six Rocky movies and only one Raging Bull.

But this isn’t Balboa vs La Motta. It is Henry ‘Razor’ Sharp vs. Billy ‘The Kid’ McDonnen. Razor and The Kid enjoyed one of the great sporting rivalries in their prime. They met twice in the ring for one victory a piece, with each loss being the only defeat of that fighter’s career. But the third and deciding bout never happened because in the lead up to the anticipated fight Razor shocked the world by announcing his retirement. Thirty years go by before a down-and-out, motor-mouthed promoter manages to coax them back in the ring for the grudge match the world has been waiting to see.

Grudge Match clearly wants to trade off the legacies of Rocky and Raging Bull. So we first meet The Kid doing a rather pathetic nightclub show which is reminiscent of the final act of Raging Bull, and we have the obligatory scene in a meat locker where Razor shapes up to punch a beef carcass before being told not to. There is also a key plot point relating to Razor and the final fight which comes straight out of Rocky II. But as much as it tries to get you to think of those movies, you are also very aware that what you are watching isn’t them. Nowhere is that more apparent than in the training montage which feels eerily quiet without the brass of ‘Gonna Fly Now’ blaring over the soundtrack.

Rather than being a straight up sports movie Grudge Match is a comedy, and that doesn’t help it. The jokes aren’t good enough to make the film genuinely funny, but they are constant enough to be a distraction. Some of the jokes are also in surprisingly poor taste. While De Niro has settled into a career as a comic actor, and Kevin Hart and Alan Arkin are right at home, the comedy format doesn’t make the best use of Stallone. Sly is a better actor than many people give him credit for. He has a real ability to elicit sympathy for a character – it’s part of what made the Rocky franchise work – and in the more dramatic scenes of Grudge Match he acts rings around De Niro. But he struggles with comedy. His sense of timing and his delivery aren’t as strong as his co-stars and the material isn’t good enough to compensate for that.

All of the film’s plot complications feel unnecessarily forced and the final fight, despite being the thing the whole movie has built towards, doesn’t quite crescendo the way that it should. In the end this movie feels as tired as its two aging stars must have after going ten rounds. The most interesting part of the movie comes in the final credits where there is a short scene between Mike Tyson and Evander Holyfield.