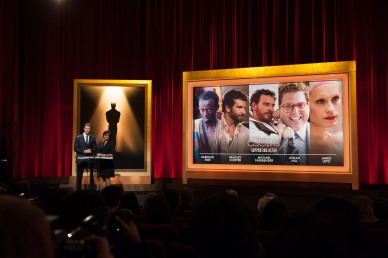 Bright and early on 16th of January the President of the Academy of Motion Picture Arts and Sciences, Cheryl Boone Isaacs, was joined by actor Chris Hemsworth to announce the nominations for the 86th Academy Award to be held on 2nd March. A full list of the nominees can be found here. While there was plenty that we saw coming, as usual the Academy did throw us a few curve balls. This year has been heralded as quite a good year for Hollywood in a critical sense. While some years you would struggle to find five worthy nominees in each category, this year there seemed to be an abundance. As a result most of the surprises have come in the form of omissions rather than inclusions. Here are my picks for the five biggest…

1) The near complete shutout of Inside Llewyn Davis

The Coen brothers have become Academy favourites in recent years and their latest film, Inside Llewyn Davis, has been a critical darling and was expected to be a serious contender. As such, it was a surprise to see it miss out on a Best Picture nomination. This is made all the more significant by the fact the Academy chose only to nominate nine films when there are ten spots available. So it didn’t miss out in favour of something else. It was simply not chosen. Not only did it miss out on a spot in the main category, it was almost completely frozen out, missing out on nominations in the directing, screenwriting and lead acting categories where it would have been considered a chance. In only receiving two nominations (for cinematography and sound editing) Inside Llewyn Davis probably trumped Saving Mr. Banks as the big loser out of the nomination announcements.

Probably the biggest individual surprise omission was Tom Hanks missing out on a nomination for his performance in the title role of Captain Phillips. A two-time Best Actor winner, Hanks’ was considered by many to be the frontrunner in this category. A win would have put him alongside Daniel Day Lewis as the only men to win three Best Actor Oscars. But as it is that will have to wait for another year.

Robert Redford is a bone fide Hollywood legend but has never won the coveted gold statue. His performance in JC Chandor’s All is Lost, where he played the sole character in the picture, was simply remarkable and left many thinking it put him in the mix for Best Actor – in situations like this the Academy has been known to give someone an award almost as a pseudo-lifetime achievement award. But Redford failed to receive a nomination, with the suggestion being that the film’s distribution company, Roadside Attractions, didn’t campaign as hard as they could have.

4) Blackfish misses out on a Best Documentary nod

Surprises don’t tend to get noticed as much in the documentary categories simply because not as many people have seen them. But in this case, plenty of people have seen Blackfish. The doco exposing the unacceptable living conditions and treatment of the performing Orcas living in Seaworld parks was well received critically and commercially and would have been expecting a nomination.

5) David O. Russell does it again

I don’t know if you can really call this a surprise, but it is definitely historically notable. For the second consecutive year a David O. Russell film has managed to score nominations for Best Picture, Director and Screenplay and all four acting categories. It has only happened 13 times in 86 Oscars ceremonies, so to do it twice, let alone in consecutive years, is impressive to say the least. It seems if you want to get nominated for an Oscar your best bet is to get yourself in a David O. Russell film.

I haven’t had time to write up a lot of full reviews lately, so who knows if I’ll get to it, but I saw The Father today and was blown away.
The Christian film industry is stepping it up a gear.
This arrived in the mail yesterday and I am devouring it (by the standards of a slow reader like myself). It is a really accessible, readable account of the way women were pushed out the film industry after having got on at the ground floor, and how their contributions were written out of history. Particularly interesting if you are familiar with the ‘traditional’ telling of film history that this provides a counterpoint to. Bravo @heleno84. I’ve got some classes to redraft for this semester. #womenvshollywood
Looks like I’m going to have to re-up that AppleTV+ subscription when the free year expires. Damn you Ted Lasso.
For the first time in, I don’t know, ever, the top three spots at the Australian box office are held by Australian films. With Long Story Short #LongStoryShort just released could it be four next week?
Raiders of the Lost Ark on 35mm at @hornsbyodeon
Shadow in the Cloud is sick! Came in not knowing what to expect and I loved it so hard. It has big B-movie energy and knows exactly what it is, but is so well executed. Some really cool storytelling choices. Moments of sublime stupidity, genuinely surprising twists and high-five-the-person-next-to-you action beats. Take a bow Roseanne Liang and Chloe Grace Moretz.
Arcadia Twin Cinemas, Ulladulla.
What do we reckon? I’ve seen WW84 and TheDry. Promising Young Woman is on my to do list, but do I see Shadow in the Cloud? Is it the right kind of stupid?