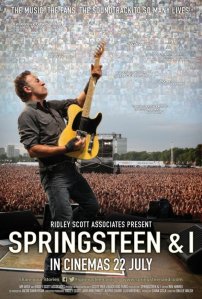 While many rock stars over the year have had fanatical fans, very few have had a fan-base as devoted and loyal as that of Bruce Springsteen. One of the reasons that even after more than three decades of touring Bruce Springsteen and the E Street band are still one of the very best live acts in the world is the way that Springsteen connects with his audience. His fans both worship him and identify with him. For many millions of fans the music of Bruce Springsteen and the E Street Band is the soundtrack to their lives. His songs speak to the lives of ordinary, working class people and validate their experiences. I once heard Springsteen described as having written a song about every beer you ever drank. In Springsteen & I a young Asian woman talks about riding her bicycle to work at Jamba Juice early in the morning, listening to The Boss and being made to feel like through her labour she was “the backbone of America.”

Executive produced by Ridley Scott, Springsteen & I is effectively a fan-film. Fans were invited to record their own messages, memories and reflections. These submissions have been compiled together by director Baillie Walsh and punctuated with concert footage from different points in Springsteen’s long career.

Rather than any sort of narrative or career overview, this diverse fan base which crosses continents and generations gives us a series of very personal moments and encounters – whether the man who went to a concert dressed as Elvis in the hope of fulfilling a lifelong dream of singing with the Boss, the women who went with her “I’ll be your Courtney Cox” sign and got invited up to dance, the busker who saw him in the street and had an impromptu jam session, or the man dumped by his girlfriend the day before the concert who was invited up on stage for a hug. In a number of cases these stories are brought to life by the inclusion of archival footage from the relevant concert. Devoted fans tell us, in their own words, what Bruce Springsteen means to them. Some are funny, some are touching, some offer way too much information (one woman lost her virginity to ‘Thunder Road,’ another talks in detail about discovering her womanhood as an early teenager seeing Springsteen dance to the saxophone solo in ‘Jungleland’), but all are sincere.

The strength of Springsteen & I lies in its authenticity. With all of the films contributors having shot their own footage on devices of differing quality and with differing levels of thought and preparation given to what they would say and where they would say it, the end result is a film which is completely lacking in pretention. Walsh obviously recognised the importance of this authenticity so does minimal cleaning up of people’s recordings. This results in a bit of awkwardness, as we see people stopping and starting over, getting up to turn off or adjust the camera, and so on, but rather than being off-putting the lack of polish feels appropriate given Springsteen’s standing as a working class hero.

Springsteen & I gives us insight into fandom of an equally powerful but less extreme nature than we have seen in documentaries on Comicon or Trekkies. It also gives you some idea of the incredible pressure someone like Springsteen must be under with so many millions of people around the world having such a strong emotional investment in him and his music. Springsteen & I will be of interest not just to fans who can identify with the stories but also to anyone interested in trying to understand what the big deal is.