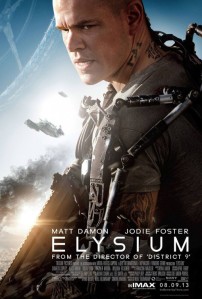 Writer/director Neill Blomkamp made the world sit up and take notice in 2009 with District 9, a powerful allegory for apartheid era South Africa and one of the most original science fiction films in recent memory. The success of that film – it took $210 million worldwide off a $30 million budget – has afforded him a larger canvas for his second film, Elysium.

The year is 2154 and Earth is in ruins. Those who can afford it have moved off-planet, taking residence on a man-made habitat in Earth’s orbit called Elysium, where they protect their standard of living by using what’s left of Earth’s resources and protecting their borders from undesirables. On Earth we meet Max, a career criminal trying to live straight. A work accident sees him exposed to a severe dose of radiation, the result of which is he only has five days left to live. His only chance at making it is to get to Elysium.

Despite being a genuine Hollywood movie this time around (the budget is estimated at $115 million) with an A-list cast, Elysium maintains a similar feel to District 9. Again, Blomkamp is engaging in socially conscious science fiction. While Elysium is not as specific and allegorical in its focus as District 9, the film seeks to engage with a number of prominent social issues including the gap between the haves and have-nots, illegal immigration and the seeking of asylum, and the necessity of universal healthcare. It is difficult to imagine that a more overtly socialist Hollywood blockbuster has ever been made.

The film looks amazing. While Blomkamp mainly gets praised for his narrative and broader aesthetic, he is an adept user of CGI. Naturally, as a big-budget sci-fi blockbuster, Elysium contains its share of spectacle, but it is the subtle, unobtrusive way that the film employs CGI which is most impressive. One of the most effective uses of CGI is in the simple way that in the scenes on Earth we can see the distant figure of Elysium hanging in the sky. It has a strange beauty and you can imagine how its constant presence could serve as a torturous reminder to Earth’s impoverished inhabitants of the good life that is just out of reach.

This time around the story is set in America but Blomkamp retains the international flavour which was such a point of difference in District 9. The rundown Los Angeles setting, actually shot in Mexico City, possesses a similar dustbowl aesthetic to the Johannesburg shantytowns of District 9, and stands in stark contrast to the lush greenness of life on Elysium. Both on Earth and Elysium we hear multiple languages spoken. Sharlto Coply, the star of District 9 who is back as the vicious agent Kruger, is even allowed to speak in his natural South African accent.

Blomkamp had a hard act to follow after the success of District 9. Not only was that film so clever and brilliantly executed, it also had the advantage of being a complete surprise. Elysium, as one of the year’s most anticipated blockbusters, has no such luxury. Blomkamp’s offering doesn’t exceed expectations, but it does enough to satisfy them and is definitely the most original and interesting of the big-budget event movies we’ve seen this year.