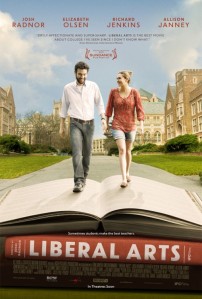 Plenty of films have been made about nostalgia for the glory days of college, but invariably they are most concerned with partying and responsibility-free living. Rarely do you find a film which considers the university years with the same level of earnest idealism as does Liberal Arts.

Jesse Fisher is a 35 year old liberal arts graduate who is working as an admissions officer in a New York college. He accepts and invitation to return to his alma mater in Ohio for the retirement dinner of one of his favourite professors from his time there. While back on campus he strikes up a friendship and romance with a 19 year old drama student named Zibby (short for Elizabeth), a relationship that at the same time manages to make Jesse feel young and remind him of how old he is.

At its heart, Liberal Arts is a film about growing up, and the college becomes a metaphor for youth, and all the opportunity and boundless potential that entails. Jesse is overwhelmed with excitement to get back to his alma mater and really wants to once again feel like he did back then. However, for all his excitement at getting back to college, we also get, as a contrast, the perspectives of two lifelong academics; one whose passion has been replaced by bitterness and resentment, the other who, facing retirement, is concerned that like a prisoner he has become an ‘institution man’ and won’t be able to function in the outside world.

It takes you a while to get on board with Jesse and Zibby’s relationship. Initially, it doesn’t quite seem plausible. You don’t understand her interest in him. It just seems to happen. But once it is established it starts to make more sense. With the sixteen year age gap being so prominent – there is a great little scene where Jesse tries to get his head around their age difference by working out how old she was or will be at different stages of his life – Jesse and Zibby’s relationship also ties into this theme of growing up. He sees her as a way back to the hopeful young man that he was, someone with whom he can have the lofty, intellectual conversations which were once so important to him but have since become absent in his life. For her, frustrated by the calibre of male in her peer-group, he is a chance to fast-forward into adulthood.

The film also contains a few subplots, the most interesting and authentic of which is Jesse’s relationship with a manic depressive boy he meets on campus – another relationship Jesse just seems to fall into. The two bond over reading, and Jesse becomes a surrogate father figure for this brilliant but troubled young man.

Liberal Arts is written and directed by its star, Josh Radnor. It is Radnor’s second film as a writer/director after 2010’s Happythankyoumoreplease, another film about growing up. Radnor would be most familiar to viewers as Ted Mosby from How I Met Your Mother, and viewers of that show will struggle not to see him playing a version of the same character here. Elizabeth Olsen – the younger sister of twins Mary-Kate and Ashley – is quite good as Zibby, and is definitely one of the young actresses to watch over the next couple of years.

At times Liberal Arts can briefly cross the line into pretentiousness, but no more than you would expect from a screenplay trying to capture the vibe of young, faux-intellectual liberal arts students. But despite this, the film is quite charming, will appeal to people who have had that particular experience of college, and does enough to suggest that Radnor could develop into quite an interesting filmmaker.