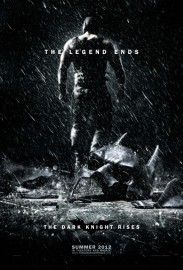 xception of perhaps Ridley Scott’s Prometheus, no film released this year has had to contend with the immense weight of expectation that met The Dark Knight Rises, the final film in Christopher Nolan’s brilliant Dark Knight Trilogy, when it hit theatres in July. Nolan’s films had re-written the rules of comic-book movie-making, combining box office success with critical reverence.

The Dark Knight Rises sees Bruce Wayne living in self-imposed exile after the events of The Dark Knight. When the terrorist Bane releases thousands of Gotham’s most dangerous criminals from Blackgate Prison, and succeeds in prompting a class war which brings the city to its knees – all the while obscuring his even more devastating plan – it becomes apparent that Gotham has no other hope, and Wayne is forced to once again don the Bat-suit.

When the first film in the trilogy, Batman Begins, was released, much was said about this being a ‘darker’ approach to Batman. But the darkness wasn’t really anything new. Tim Burton’s films, Batman (1989) and Batman Returns (1992) had been dark. Frank Miller’s comic The Dark Knight Returns and Batman: Year One had been dark. Batman had always been a character who suited a dark, gothic interpretation. Rather, what made Nolan’s take on the Batman mythology different was his intent to ground it in the real world, asking the question “How would this work in real life?” This emphasis on grounding the action in the real world  then allowed for the film to engage with real world issues.

While other comic book adaptations like The Avengers and Iron Man have been incredibly successful, their pure escapism lacks the real-world relevance of Nolan’s Dark Knight Trilogy. Batman Begins and The Dark Knight were both very much products of the War on Terror. The Dark Knight Rises draws on the Arab Spring and the Occupy Wall Street movement to deal with themes of revolution, capitalism and economic imbalance (as Nolan said in an interview, “You can’t really deal with Bruce Wayne without eventually acknowledging the massive wealth he’s a part of”).

Likewise, this grounding of the Batman story in a real world means that in Nolan’s films we see explorations of the consequences of Bruce Wayne’s decisions and actions. The Dark Knight Rises is a film about consequences – physical, emotional, psychological.

Each of Nolan’s three Batman films have been generically quite different. Batman Begins had a very mythological feel to it, with Bruce Wayne travelling to the farthest ends of the earth to learn his craft from a mysterious cult. The Dark Knight largely abandoned that mythological sensibility, and instead became an urban crime thriller (Nolan often compared the picture to Michael Mann’s Heat (1995)). The Dark Knight Rises again changes direction. This time Nolan is taking us into the world of the historical epic.

Whether or not you think that The Dark Knight Rises succeeds in what it is attempting, you can’t help but admire the ambition of the film. Nolan is attempting to tell a historical epic (not the persistant allusions to Dickens’ A Tale of Two Cities and the French Revolution) on an epic scale, resulting in filmmaking on a scale that has not been seen in Hollywood for a long, long time. The scale of the picture is immense, with this size emphasised by the fact that so much of it was shot in IMAX format. The magnitude of some of the set pieces, literally employing a cast of thousands, harks back to the epics of classical Hollywood and a style of filmmaking we just don’t see in the CGI era.

The Dark Knight Rises does not quite reach the lofty heights of its prequel, but then very few films have. It is, none the less, a very good film and a satisfying end to a very impressive trilogy. It is pleasing to see a filmmaker with the conviction to take a very popular film franchise and bring it to a close rather than giving in to the temptation to drag it out. In closing the story of Bruce Wayne with The Dark Knight Rises, Nolan has retained the integrity of what will undoubtedly be remembered as one of the key film franchises of the early 21st century.